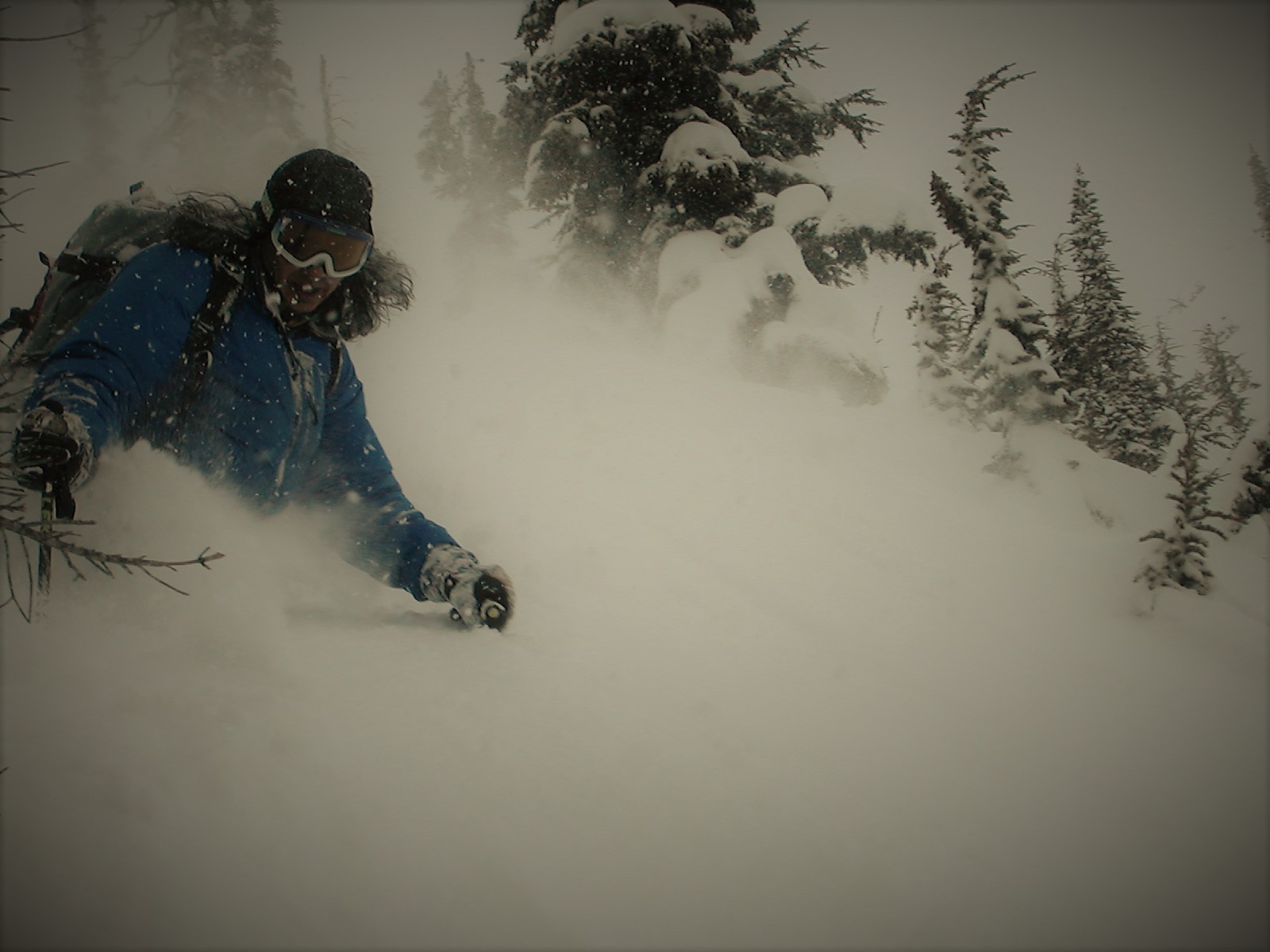 February, 2003, Cheops Mt. Photo is of my bud Troy making what was almost his and my last turns. This was 20 years ago so my memory isn’t the greatest for details. What I do remember is a snowpack that was similar to the one we’re ‘enjoying’ these days. I’m sure you’ve heard as there’s lots of warnings out there on the Interweb. Here’s a few things that I remember from that day and season:

This season is a similar snowpack to ’03 which for the Selkirk’s was/is unusual. Not unheard of, but few and far between. Check out Avalanche.ca for a better grasp of what’s happening so far this season.

I believe it started snowing sometime in early or mid February. It snowed a lot. No matter how many times we tell ourselves to be careful, powder-fever can be a powerful force. Sometimes even rendering us illogical and forgetful. It was dry for a long time and we were hungry. By this time, I’d had a fair bit of experience in fair and even poor snow stability, thought I had a grasp on things. Ha, wrong buddy!

Reflecting, I believe there may have been a bit of false-confidence hanging around in our heads ‘cause we’d been shredding some pretty cool lines, but those lines were often steep couloirs, where surface hoar can be destroyed by regular sluffing. This also hardens the snowpack which often results in less of an issue in these features (although not all together, this is a complex subject, only speaking generally here).

Can’t remember which order the 2003 tragedies came, but this day was either a day or two before the unfortunate accident at SME in the Northern Selkirk’s. There were 4 of us on this day. We approached the top of the Hourglass where Tove and Karin felt a bit uneasy about Troy and myself wanting to continue to the more serious paths to the west. In hindsight, I wish we’d listened to their wisdom. They were not having anything to do with continuing past the Hourglass. It has been said that women are smarter, lol!

Anyone that has snuck down the paths to the west of Hourglass will remember the bench just below the headwall. This is where we thought we could sneak into the lower paths. We were definitely concerned about the amount of new snow. Obviously, not concerned ENOUGH. Troy started down, but soon got bogged down in deep snow on the flat. I used his track then blasted past him as far as I could. We were soon together, struggling like lemmings in the deep snow. Then it happened. It’s hard to put into words when a soft slab avalanche rips, kinda like a shhhhhhhhhhhh. Echoing across the slope in a mesmerizing way. Us floundering through the flats is what triggered the entire slope above us. It failed on surface hoar.

I’ll never forget the sight and sound of Troy yelling “DOUGIE CLIMB A TREE!” It was surreal, looking up at the slope above us ripping very large, death upon us and watching Troy as he attempted to climb one of the tiny trees in this old climax path. I remember it being almost comical for a moment, thinking; there’s no way THAT’S gonna help. And then I snapped out of it. Then I got scared.

Then luck happened. The bench at the top of the feature has a slight rib to it. As the avalanche gained momentum as it was squeezed into the slidepaths, the rib was enough to cause it to deflect on either side of us. We felt some blast and debris, but were spared from being dragged down with it. I just can’t put the intensity of the moment into words. After the incident, we sketched our way back into the Hourglass and followed Tove and Karin’s tracks to the hotel where we had a beer or two…

This remains to this day, the largest avalanche I’ve seen in these paths. They are not frequent performers. Being 20 years ago, Rogers Pass was still a pretty quiet area. The avalanche was a size 3 and it buried the Balu Pass Trail. Oh man, I try not to think about if this was to happen in modern times when some days there are over 300 people in Connaught Creek.
Remember that surface hoar loves to be triggered from flat areas where it’s least expected.

I’m not saying this to spread fear or attempt to predict the future. Anything can happen, there are endless possibilities when it comes to mountains, terrain and snowpack and there will likely be times this season that amazing turns can be had. I just wanted to share this experience because if it turns out those PWL’s (Persistent weak layer) become any more sketchy than they already are, I hope folks can benefit from this info. It’s been a slow start for precipitation in these parts, but this is BC and most likely, heavy snowfall will happen sooner or later. One day while skiing with Greg Hill he said “expect the unexpected”. Wise words Greg.

Avy debris in the Google Earth shot is the best my memory could do, it’s not exact.

Douglas Sproul is owner, researcher, authour, developer, designer, publisher, distributor and dishwasher of GeoBackcountry and Uptrack Publishing. His products are mandatory for the Rogers Pass backcountry and can be purchased online.