In my last post, I introduced the work of the Canadian Avalanche Center with a focus on the South Rockies Field Techs, Dave Tracz and Gord Ohm. On Jan 26, I decided to go out with these guys for a day, to observe the nuts and bolts of their operation. When I showed up at their office at 8:00 AM, Gord told me that there had been a large avalanche at Crossing Creek and we had to go make some observations.

To my mind, chasing avalanches sounded romantically exciting. Would we get to slide down the shiny pole like firemen and race off in a big red truck with lights flashing and sirens shrieking? To my disappointment, this was not the case. After checking in with central dispatch and casually packing our gear, I was back in my old blue Ford pickup, driving down the highway, obeying the speed limit.

We drove to the trail head and snowmobiled up the creek until we came to a monster debris pile that had obliterated the road and run a short distance up the opposite side of the narrow valley. The avalanche had occurred naturally during the night, at that mysterious trigger moment when gravity suddenly and catastrophically overcomes snowpack cohesiveness. Dave and Gord probed and measured to learn that the debris was about 2 meters thick, spread out over a fan that was approximately 100 by 100 meters in size. Doing some simple math and assuming that the snow had a 40% water content, we calculated that 8,000 tonnes of snow had come rushing 530 vertical meters (1750 feet) down the gully that now loomed above us. Enough to rate the slide as a class 3 or 3.5 and to schmuck anyone in its path. 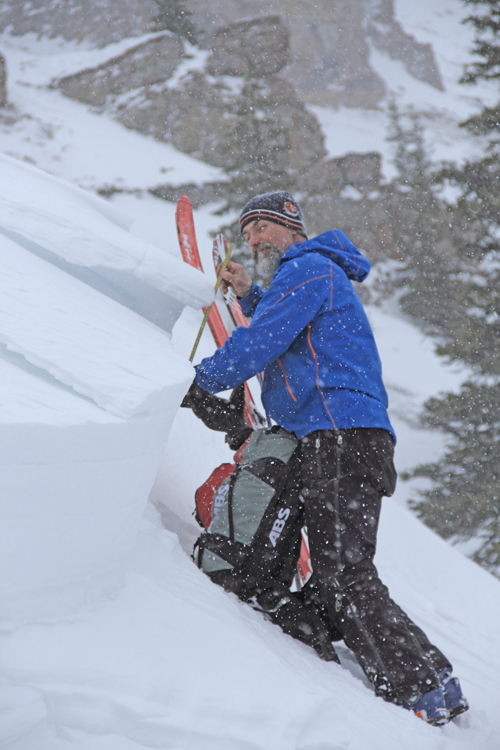 Now we had to climb up to the top of the gully to analyze the starting point of the avalanche. Frankly, I was a little bit nervous. There was significant hang-fire, a slab of snow that had not slid, just sitting there. Of course we selected a safe route out of the line of fire, but still, the main gulley had avalanched the night before, why wouldn’t the rest of it go? I understand the reasoning. The snow that was primed to slide already slid, and what didn’t slide wasn’t going to. Got it. OK.

I looked up at the hang fire that was grinning at me and felt like a war correspondent going into battle.
Gord and Dave, however, were confident. Given their combined decades of training, knowledge, expertise, and experience, I gradually relaxed and followed, enjoying the day, the company of friends, and an endless vista of snowy mountains. We reached the crown in a light snowfall, and scampered around, poking, digging, and examining snow crystals. The initial on-site conclusion from the good doctors, One bad-ass cross-loaded wind-slab over facets size 2.” (The online report came out in more technical language) 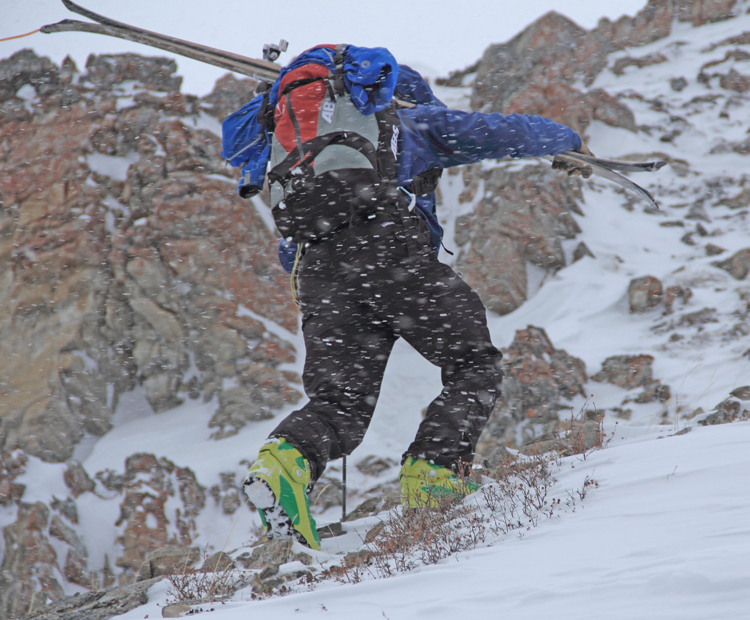 Days work complete. We skied down the gulley over a god-awful mixture of icy bed surface, rock, and grass. At one point, Dave remarked, “Gord and I get to ski a lot, but it’s not always the good stuff.” Finally near the bottom, we crossed over to an adjacent gully and skied 500 feet of good pow.

Perhaps I shouldn’t admit this, but as a back country skier, I routinely ski when the danger rating is “Considerable”. But where’s the line? Why did that particular gulley in Crossing Creek slide that day, that hour, the nanosecond that it did? And why were there no slides in three closely spaced parallel gullies in the same valley with the same exposure?

During the next week, three class 3 or 3.5 slides came down, naturally, in the Lizard Range and the South Rockies, even as the avalanche rating declined from “Considerable” to “Moderate” in the alpine and “Low” below. The reason, unusual triggers such as wind slab and cornice fall. So, even when the snow is “stable and safe”, there are exceptions. Or something like that. Heads up.

I’ll always be a back country skier. For me, there is no other way. But after 30 years of experience, I came away from the day humbled by how little I really understand.