FWT returns to Golden BC 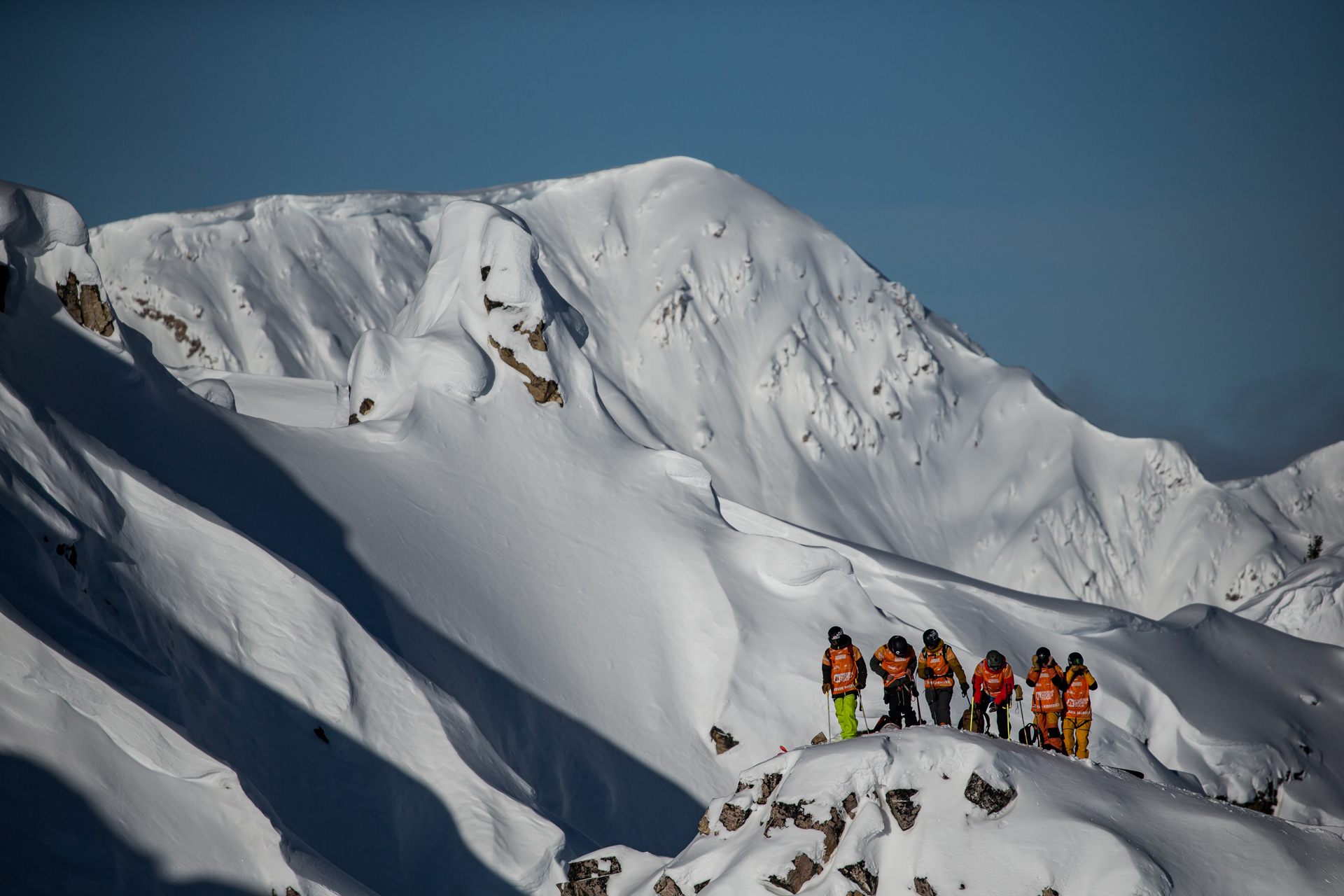 The Freeride World Tour has announced it’s 2021 schedule and the good news is, they’re returning to Golden BC! Golden’s Kicking Horse Resort has become a regular stop on the FWT tour and the only stop in North America.

Famous for its powder and steep big mountain terrain, the Canadian Purcell Mountains will welcome once again some of the best riders in the world. Competitors and fans can look forward to a season full of top talent pushing competition to the highest level across the planet. The best part is – the venues are easily accessible to freeride fans and spectators. Mark your calendars and come join in the action and support your favorite riders as they throw down!

This season the world’s best freeriders will be back charging hard for the world title in a brand-new format. Last season the FWT announced gender equality and this year the championship format has changed!

NEW CHAMPIONSHIP FORMAT
To make the competition more exciting for both athletes and viewers alike, the FWT has revamped the championship format. These changes will ensure the world’s top freeriders get the best opportunity to compete for the world title and continue to push the progression of the sport into new realms. This year will see four pivotal changes: 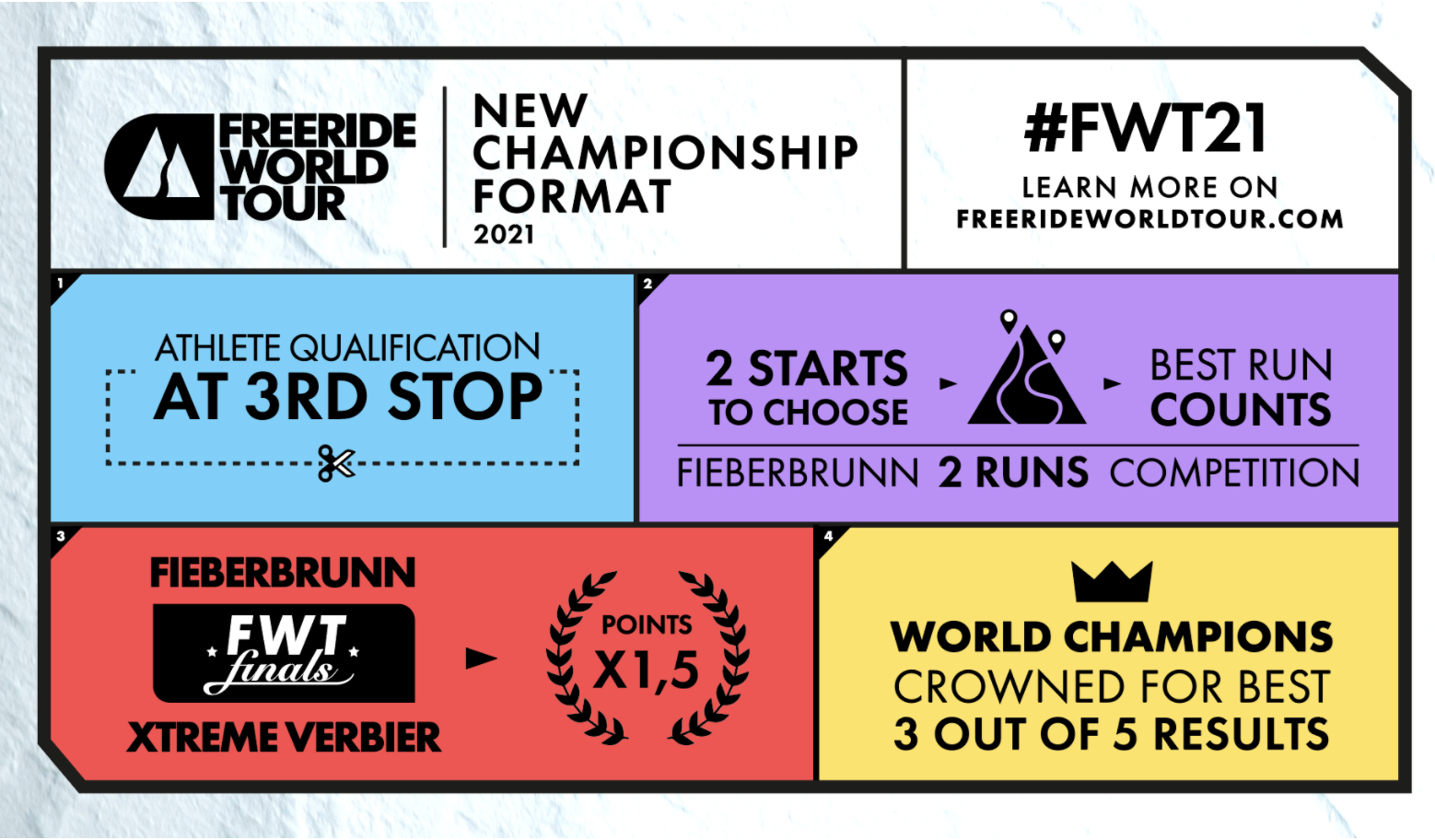 1. Athlete qualification will occur at the third stop (instead of the fourth), making the Ordino Arcalís Andorra ‘crunch time’ for the athletes. The same numbers still go through as 2020 (best 2 results out of 3 events counts): 13 ski men, 6 ski women, 6 snowboard men, 4 snowboard women – totalling 29 riders.

2. Two runs in Austria. After a successful test last year with snowboard men, riders this year will get two runs in Fieberbrunn and keep their single best score.

3. The FWT Finals in Fieberbrunn and Verbier will be rolled out after the cut, where for the last two events, the points will be weighted 1.5. This means the winner will take 15,000 points, compared to 10,000 for the first three stops.

4. World Champions will now be crowned for their best three results out of five.

Check out the teaser for the FWT21 below:

These resorts offer natural freeride playgrounds giving the athletes the best platform to throw down their skills in the fight for the world title. Here is the FWT21 calendar:

HAKUBA, JAPAN | 23-30 January
Hakuba marks the real start of winter as the Freeride World Tour makes its first stop in Japan! The deep conditions and exciting terrain will give the riders the best possible start to the competition season.

KICKING HORSE GOLDEN BC, CANADA | 8-13 February
Next up, it’s time to get rowdy at Kicking Horse Golden BC, Canada. The playful terrain packed full of natural features is ideal for riders looking to get creative by including freestyle elements in their lines!

ORDINO ARCALÍS, ANDORRA | 22-27 February
The third stop on the FWT21 will be Ordino Arcalis, Andorra. The new competition format means that this will be crunch time for the athletes to put down runs that will earn them a place at the final two stops! The unpredictable and sometimes, tricky conditions means that the riders will have to be able to adapt quickly to be able to hold the line to advance to the new finals format!

FIEBERBRUNN, AUSTRIA | 6-12 March
Another first for the Tour will be seeing all athletes get two runs down at Fieberbrunn with their best score counting towards their points total. AND the points for the final two events will be worth 1.5, e.g winner will receive 15,000 points rather than 10,000 points. The Tour will hit Fieberbrunn, Austria. Who will be committed enough to conquer the Austrian Alps and go onto the all important showdown at the Xtreme Verbier?

XTREME VERBIER, SWITZERLAND | 20-28 March
The illustrious and Grand Finale that is the Xtreme Verbier, Switzerland where the FWT champion will be crowned for their top 3 results out of five from the whole Tour! With it all to play for at the final event, who will conquer the incredibly steep Bec des Rosses and be crowned the 2021 FWT Champion!?

As health and safety is always the priority for FWT organisers, they are actively working in conjunction with local authorities to make sure each competition is compliant with current regulations.

Competition broadcasts will be available on www.freerideworldtour.com. Until then, stay tuned for the latest news as the countdown to winter begins.