Moderate is NOT the new Low

Over the last several years we have seen an increasing number of avalanche related close calls involving skiers and climbers. Between better equipment and getting out more during the midwinter avalanche season, incidents have been increasing. Of the different accidents that we routinely deal with, I believe avalanche accidents will slowly increase as part of our overall percentage of accidents on Mount Washington and may become the dominate player over time. As I started to put together a post describing Thursday’s avalanche incident in the Lower Snowfields it occurred to me it would be better to look at the big picture. (However all the photos are from this most recent incident.) I felt the need to do a Pit post to highlight the avalanche potential that you may encounter when climbing or skiing on Mount Washington under avalanche ratings in the middle of the danger scale, namely Moderate and Considerable. When snow stability falls into Low, High or Extreme it is generally pretty obvious, giving us either the green or red light for steep terrain travel. In between these more clear conditions is the middle ground, which of course is the most challenging for you, and us, to analyze. Stability tests with false stables, a little less or more new snow than forecasted, hidden sweet spots, and thin slabs leading into thicker slabs are just a few example that we need to pay attention to as we negotiate the terrain.

A brief and clearly understood rating system to predict a natural phenomenon is not easy and can’t convey all the nuances for all situations. The avalanche danger rating system blends the likelihood of occurrence (from unlikely to certain), with the consequences (relatively low to high), and travel advice to mitigate the potential hazard. Because one word can’t describe the entire situation it is always important to both read the entire text explaining the details of any advisory and look for signs of unstable snow in the field. There is no way around the fact that if you play in avalanche terrain you need avalanche education and mentored experience to be there safely.

Of the 9 avalanche fatalities I have dealt with since 1991, 6 climbers died primarily due to trauma while the 3 skiers died due to a combination of asphyxiation and trauma. New Hampshire, and more broadly northern New England, leads our nation in the percentage of avalanche deaths that result from trauma. Our terrain and generally low snowfall create scenarios that bring us into rocks, over cliffs, into the trees more often as we hunt for areas to pursue our sports. Our ability to ski tour in open terrain or stick to low angle slopes in avalanche terrain is near impossible in most cases. Of the nine aforementioned avalanche deaths on Mount Washington, four occurred under a Moderate or Moderate moving towards Considerable rating and two under a High rating in Tuckerman and Huntington Ravines. The remaining three fatalities occurred in the Gulf of Slides where avalanche advisories are not issued. In the two incidents leading to these three deaths the avalanche danger in Tuckerman and Huntington was posted at High.

Turning to this winter, let’s take a look at the avalanche incidents to date. Of our 6 climber/skier related incidents/accidents summing up to 28 people in the Ravines, 23 were involved in avalanche instigated incidents. The following bullets are a quick recap of the 5 avalanches involving humans:

1. Very early this season, 2 climbers were avalanched in a pocket approaching the base of the first pitch of Pinnacle Gully. They were able to walk out with no injuries.

2. In January, 12 climbers were avalanched out of Central Gully. The group was roped up in 4 teams of three climbers. This resulted in three injured climbers, but it certainly could have been much worse. As an example of what we discussed above, the following is a portion of the advisory that day demonstrating how the text conveys so much more than the one word.

“….Expect all snow that is not the old concrete from the recent warm up to be harboring weak layers and varying degrees of instability. Also anticipate bonding at the interface between the icy surfaces and the new low density slabs to be poor. With increasing winds and more snow today I would also be ready for new crystals to become beat up and fragmented packing into denser slabs over pockets of unconsolidated snow that were deposited yesterday. Due to the slick nature of the old bed surfaces you can expect frequent spindrift sluffing again today perhaps build into slabs on mid-slope benches such as in Odell, Pinnacle and Central. Because of all this you will probably find some slopes on the upper end of the Moderate rating in several locales in the Huntington gullies. …”

The avalanche rated danger was posted at Moderate. (click here for a full analysis)

3. On March 1st, 2 skiers entered the top of the Lobster Claw. The first entered familiar terrain on relatively firm hard slab. The second skier entered making more impact on the slope, due to technique, triggering the slab. The first skier was carried a short distance from his stationary position. The avalanche entrained more snow as it descended running full path. The avalanche danger was posted as Moderate.

4. On March 1st, a solo climber that had climbed all week in Huntington was on a multi-gully day. He mentioned that he wanted to climb Odell and other gullies. The only tracks going into the Ravine went up Odell, down South and up Pinnacle. New snow made this observation obvious and all but assures this was his route. He was found by the second person in the Ravine that day at 3pm. The following day one of his axes was found with the pick deeply planted in the hard old bed surface 20-30 feet below the fracture line. The avalanche danger was posted at Moderate.

5. On April 4th, 6 skiers went up Hillman’s Highway with the intent of skiing the Lower Snowfields. The exact details of how the avalanche was triggered, and by who, is difficult to ascertain. However, whether it was the group of 5 above, or the skier below, both triggers were about 12 to 13 meters away from the fracture/crown line. This is fairly consistent with what pencil hard slabs have the capability of doing, having the propensity to propagate long fractures. Sometimes this initial fracture leads to: 1. a long shooting crack with no failure, 2. immediate failure under foot causing an avalanche, or 3. propagating until it finds enough stress and weakness to cause failure remotely leading to an avalanche. It appears this last example is what caused the avalanche in this case. From the apex, or center highest point, a 13meter long /2cm wide crack runs up to where the group had been standing. 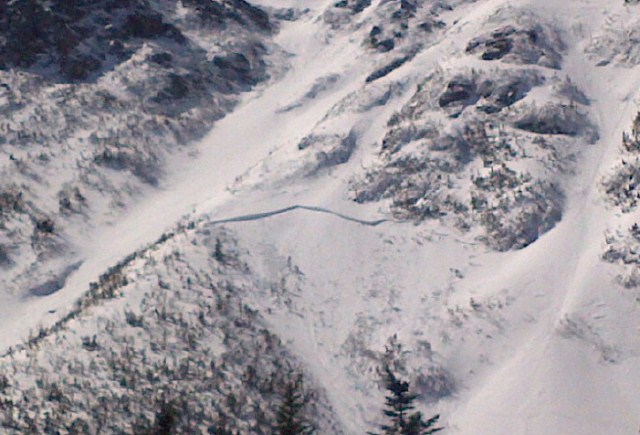 It is plausible that as the second skier started to move the initial fracture occurred in the hard slab and propagated to the area of utmost convexity and highest stress causing the avalanche. The slope faces close to due East at 80 degrees and has a 40 degree slope angle at its apex. 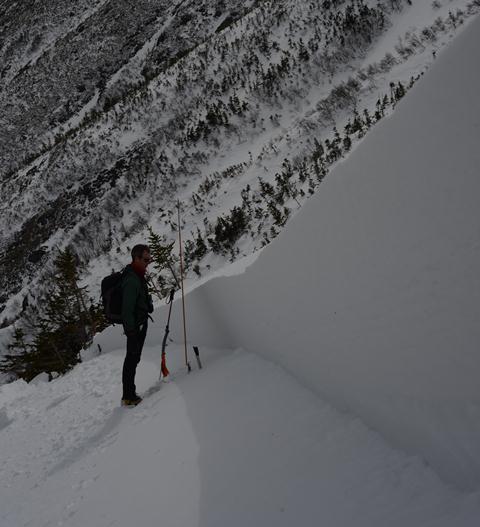 The crown was 150m long and had an average crown depth of 80 cm. The upper surface 20cm had Pencil+ hardness while the next 60cm’s down to 80cm layer was softer at Pencil-. The bed surface was a melt freeze crust. 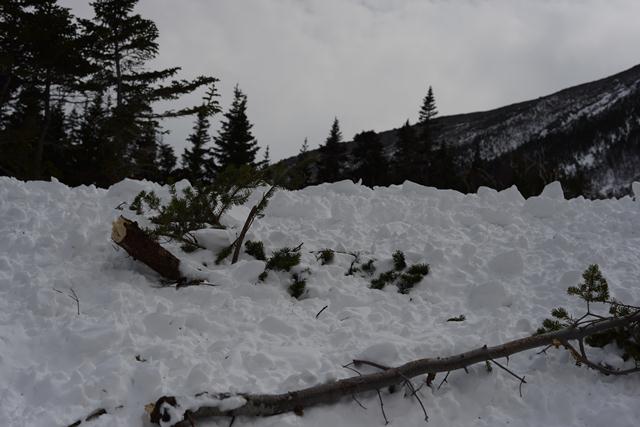 In recent years there has been an increase in the backcountry use in avalanche terrain in winter, particularly in March. That fact, coupled with an increase in avalanche class participation, and visitors equipped with avalanche safety gear more individuals are getting into avalanche prone conditions. It really is critical to understand that Moderate is not the new Low as I’ve heard it refered to as, and it’s not only at the 20% mark as the 2nd in a scale consisting of 5 ratings. It is second on a scale that attempts to predict a natural occurrance that will always have an associated degree a uncertainity. As we have seen worldwide so many times before, a human triggered avalanche under Moderate or High can very often have the same results……. not good. Certainly I am not saying Moderate and High are the same, but what I am saying is human triggered avalanches happen under a Moderate rating…period. This reality plays out every day, all winter, across the slopes of North America. Understanding this well I therefore have a respect for the “Moderate” snowpack, as on a given day it can be a wolf in sheeps clothing. I comprehend that to live a long life working in avalanche terrain I must never believe I know exactly what’s going on all the time, so I follow protocols to mitigate risk. We travel one at a time to islands of safety, we don’t travel over or under our partners without their ok, and always think through the consequences of our intended routes. So…take the Moderate rating seriously, respect it, and realize there can still be plenty of fun to be had in our snow for the skilled and experienced user by knowing what to look for as you plan your route or travel through it. As a natural force there will always be a degree of uncertainty in regards to avalanches and because the consequences are so high, namely our lives, respect and awe must be our starting point.

See you in the hills. Chris