Powder CanadaPowder NewsAvalancheCooling Off: The Relationship Between Cooling and Avalanches

Cooling Off: The Relationship Between Cooling and Avalanches 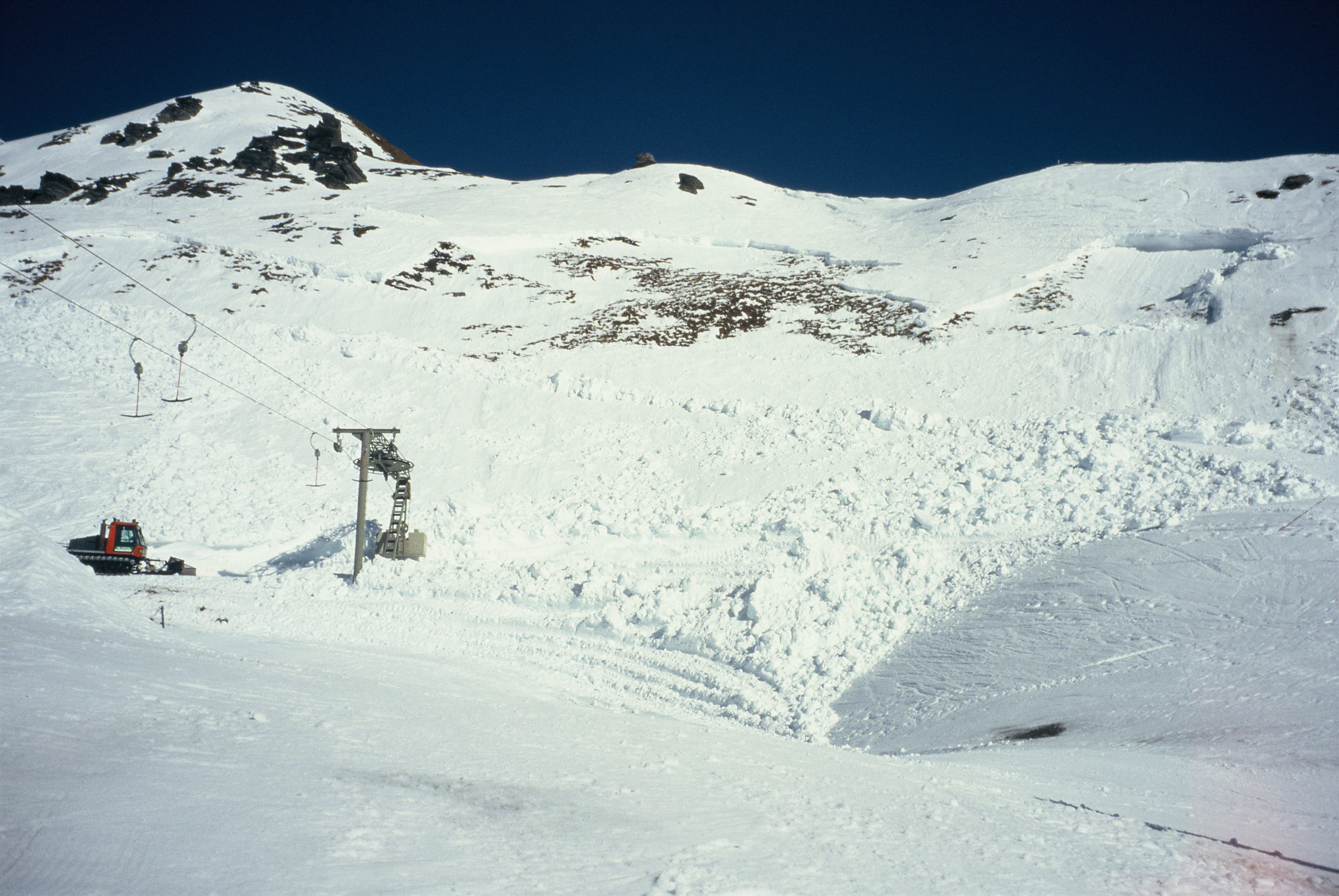 TREBLE CONE SKI AREA, NEW ZEALAND. THIS BASIN WAS CLOSED DURING THE DAY DUE TO CREEP AND GLIDE CONCERNS. AT 17:00 THE SURFACE WAS STARTING TO REFREEZE, SO THE FORECASTER GAVE THE OK FOR GROOMER OPERATORS TO GO INTO THE BASIN TO WORK. THE AVALANCHE OCCURRED SOME TIME DURING THE NIGHT, FAILING ON DEPTH HOAR AT GROUND. IT DAMAGED THE LIFT BULL WHEEL. // DEAN STAPLES

Avalanches that occur during periods of cooling are important because they can surprise people. The subject first piqued my interest several years ago while watching the sun leave a steep slope on the opposite side of the valley from a ski lodge in New Zealand. When a large slab released from the slope minutes later, it seemed incongruous.

NO OBVIOUS TRIGGER was present: no recent loading by wind, snow or rain, no person and no bomb. The only change I perceived was a rapid drop in temperature as the slope moved from full sunshine to shade and into its associated early evening chill. Days later, the same thing happened on the same slope.

In 2005, I became an avalanche forecaster at Broken River Ski Club in New Zealand. Lingering in the shadows of my mind was an avalanche which had occurred there 13 years prior. The week preceding the avalanche had been stormy, with 142mm of precipitation. Fluctuating freezing levels eventually led to a rain-soaked snowpack. On the day of the avalanche, the weather cleared, temperatures dropped and the snow surface became slick and icy. Staff decided to open the area based on conventional wisdom: cooling and surface re-freezing promote stability.

At lunchtime, a size 4 avalanche failed near the ground on depth hoar, pulling out the entire Broken River basin with a crown up to 2.2m deep. It propagated 800m wide into low-angled terrain, leaving a deposit 20-30m deep. A snow groomer and skiers were in parts of the basin and may have been the trigger, but they were far from the fracture line. Amazingly, because almost all other skiers were inside having lunch only the ski area manager was killed.

A photo of the avalanche hung on the wall in the forecasting office, leaving me chilled and uncertain. Doesn’t an icy, frozen surface mean the snowpack’s locked up? Why did the avalanche fail then and not during the warm storm? Why did it propagate so widely?

So began my investigation. I turned to the books to read up on the phenomenon and learn about the mechanisms behind such events. Beyond some passing references to rapid temperature changes, the standard volley of avalanche reference books left me empty-handed. I tried scientific journals, asked academics and searched online. Very little came to light. So I began to ask my colleagues. A few people had experienced something like
it. Many hadn’t.

A more formal questionnaire followed. In the end, 40 avalanche professionals from around the world responded. The questionnaire focused specifically on ‘re-freeze’ type events (where the snow surface goes from 0°C to below 0°C). I called this a “Cool-Down Avalanche” (CDA). The responses alerted me to the prevalence of surprising, large avalanches during periods of rapid cooling, not just when the snow surface goes from melt to freeze, but also at overall lower temperatures (e.g. a drop from -5°C to -15°C).

This article firstly summarizes the results of the questionnaire, and then highlights a round of cooling-related avalanches in Western Canada during the 2010-11 winter season. 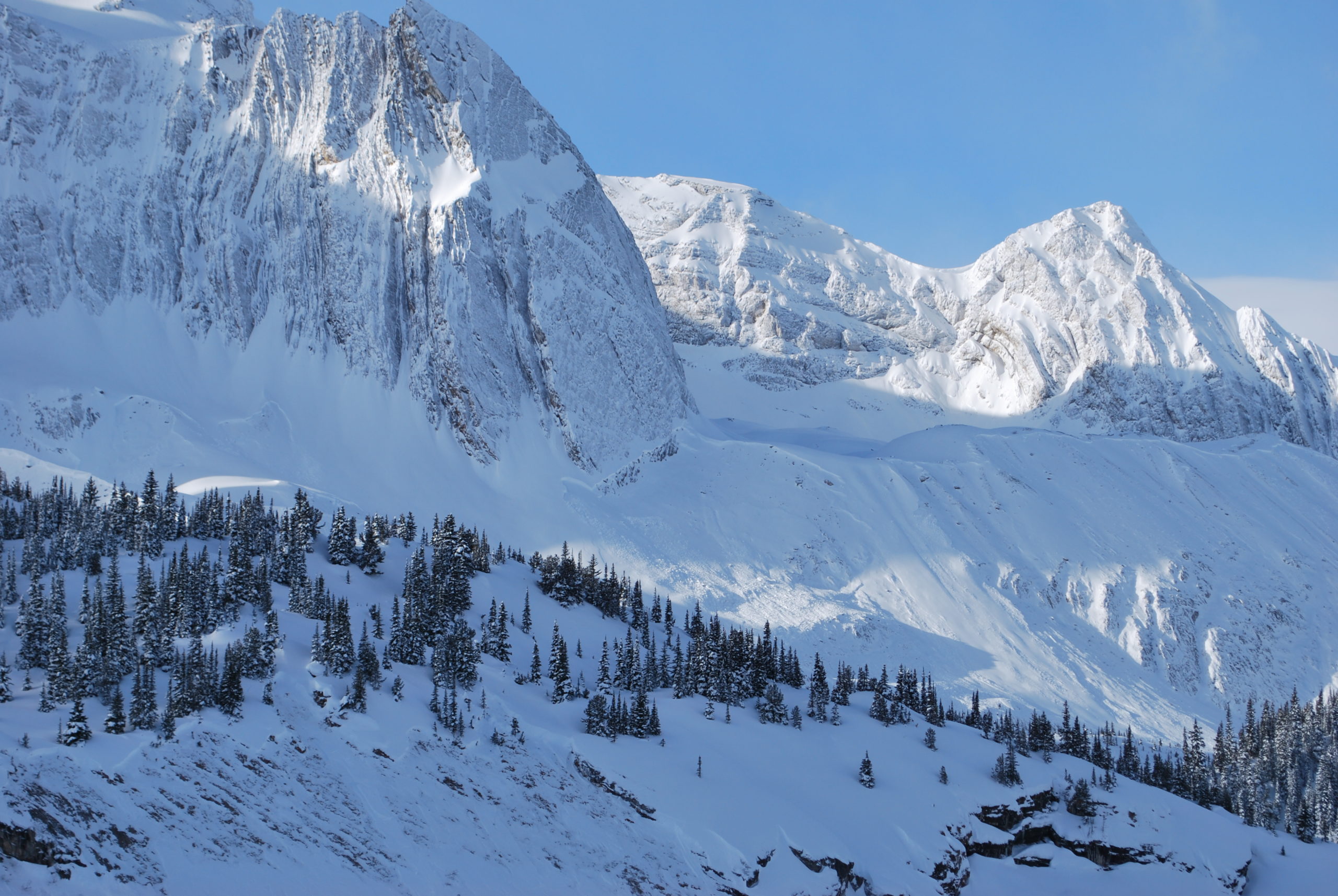 PART 1: THE RESULTS OF THE CDA QUESTIONNAIRE

• In order of descending quantity, observations came from New Zealand, North America, Europe, Asia and Antarctica.
• 15 of the 40 respondents had never experienced a CDA. Many more people elected not to answer the questionnaire at all, due to having never experienced a CDA.
• About 360 CDA were observed. This number is approximate, as the bulk of observations were poorly recorded, based instead on observers’ memories.
• 98% of observed CDA were described as slab avalanches, 2% as loose.
• The bulk of the observed avalanches were size 2-3; 14 were size 4 and three were size 5.
• 61% were described as ‘glide’ releases.
• 20 CDA events occurred within 15-60 minutes of the sun leaving the slope. A further seven occurred less than 15 minutes after the sun left the slope.
• 21% of respondents had experienced a close call involving a CDA. These included large avalanches hitting an open highway, burying a ski lift in an area open to staff, and fully burying people in guided groups.
• 38% of respondents factor CDA into their decision-making while managing the exposure of people and infrastructure to avalanches. 44% said they do not.
• Seven people who had never had a close call involving a CDA factor the possibility of CDA into their decision-making. Interestingly, three people do not factor CDAs into their decision-making, in spite of having had a close call involving a CDA (including involvement in fatal incidents).

The following comments made by respondents help address some of the reasons why CDAs are rarely factored into operational forecasting:

CDA CONCLUSIONS
• CDAs (surface refreezing avalanches) were observed around the world.
• Accidents and near-misses have occurred when operators have re-opened previously closed terrain assuming that cooling means dramatically improved stability.
• Some operators actively manage the CDA hazard through closures or explosives control, which are timed to coincide with rapid cooling or surface refreezing.
• They were rarely observed overall–many experienced practitioners have never experienced a CDA.
• There is a feeling that they are too difficult to predict, so there is a tendency to ignore them when making decisions. 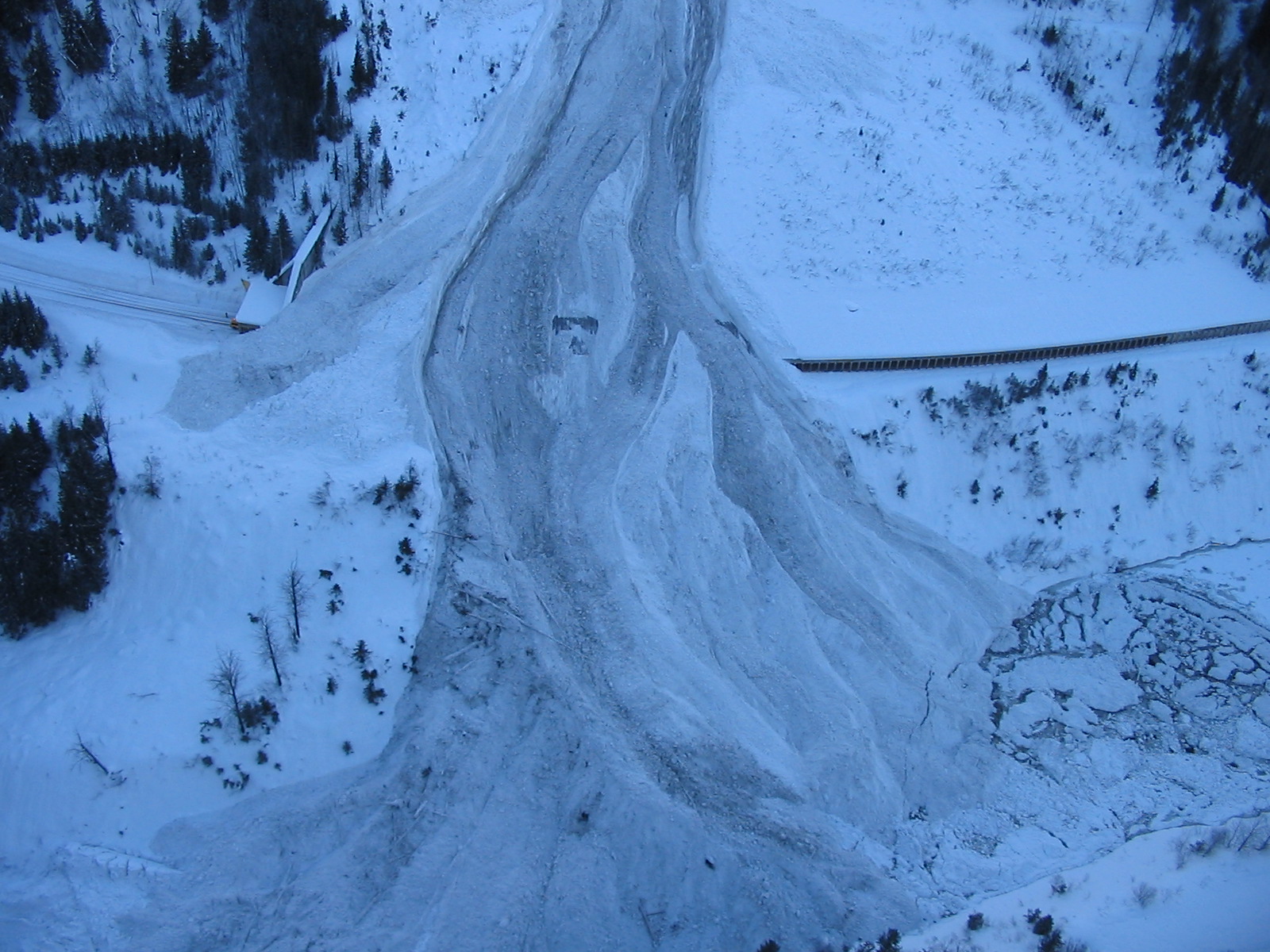 LANARK PATH, ROGERS PASS, 8:00, JAN. 18, 2011. THE AVALANCHE WAS SIZE 4.5 AND DAMAGED TEN ACRES OF FOREST. IT FAILED ON FACETS/CRUST AT GROUND. THE AIR TEMPERATURE DROPPED FROM -3°C TO -17°C OVERNIGHT PRIOR TO THE EVENT. IT FAILED AROUND THE TIME THAT SUN FIRST HIT THE SLOPE. // MINISTRY OF TRANSPORTATION AND INFRASTRUCTURE – AVALANCHE AND WEATHER PROGRAMS

PART 2: COOLING EVENTS IN WESTERN CANADA DURING WINTER 2010-11
It is important to distinguish a key difference between Part 1 and Part 2. The questionnaire in Part 1 asked specifically about ‘re-freeze’ CDA events (snow surface going from 0°C to below 0°C). The events listed in Part 2 occurred during periods of rapid cooling within an overall colder temperature regime and did not involve a clear melt-freeze process at the surface.

The included photos show a succession of large avalanches that occurred during periods of rapid cooling in western Canada. Operators described these events as very surprising, eye-opening, historic and unusual.

SOME COMMON FACTORS IN THE EVENTS OF 2010-11:
• Heavy storm loading occurred prior to the event.
• All but one failed on a persistent weak layer.
• Rapid air temperature cooling occurred, often around 7-10°C overnight.
• They were mostly very large events with wide propagation.
• In every case, experienced locals were surprised by the events.

CONCLUSION
What does all this mean? Is there anything more than a sense of vague paranoia to take away? It seems clear that avalanches sometimes occur during periods of rapid cooling, both when the snow surface is going from melt to freeze and at overall colder temperatures. It is unclear whether, or how, cooling itself triggers avalanches—and that is a topic for a whole different study.

What does seem apparent to me is that many near-misses and possibly some serious accidents were caused by faulty decision-making around cooling. The premise that cooling stabilizes the snowpack after a storm (or solar warming) ends is not always correct. Always basing decision making on this premise can lead to premature exposure to avalanche terrain.

The most constant element in these events was that of surprise. In many cases, professionals were just about to (or just had) opened up terrain previously off-limits for public, guests and staff access.

This research is mostly a collection of anecdotes. In order to really understand the mechanisms behind avalanches that occur during periods of cooling (and from there, to be able to forecast them), as a community we need to better document this type of event. I hope that this preliminary investigation will spark some discussion, spawn some more focussed research and perhaps encourage decision-makers to take a ‘second look’ at conditions during periods of rapid cooling.

I presented this topic at conferences in Penticton, and New Zealand last year. On both occasions, numerous audience members revealed that they, too, had experienced surprising avalanches during times of rapid cooling. My feeling is that this phenomenon, while sporadic, is more common than one might expect. 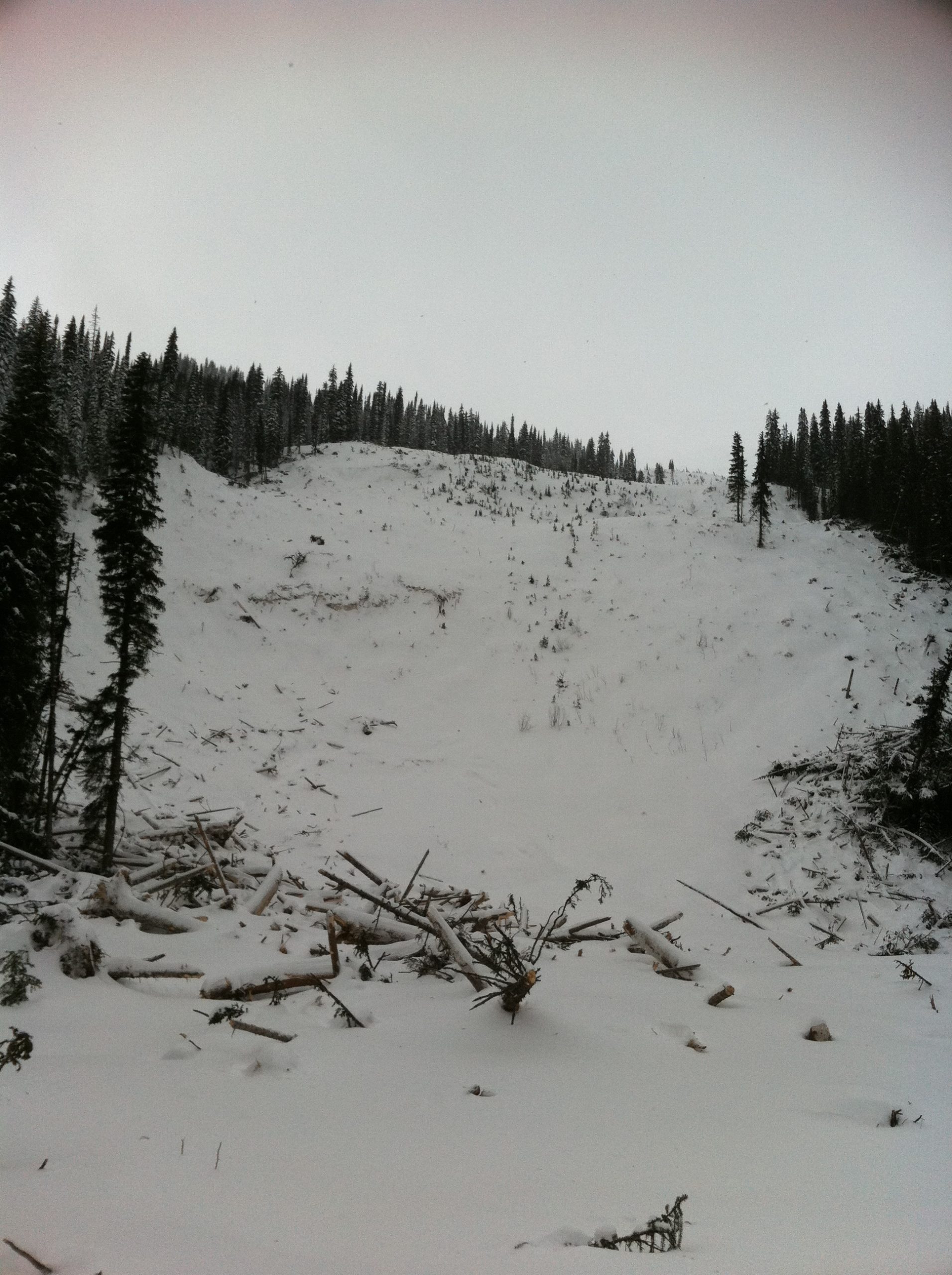 HILDA PEAK, VALKYR RANGE, JAN. 20, 2011. THIS SIZE 4 AVALANCHE WAS AN ISOLATED EVENT WHICH OCCURRED POST-COOLING. THERE WERE NO OTHER LARGE NATURAL AVALANCHES DURING THE CYCLE. IT DESTROYED MATURE FOREST. // RYAN GLASHEEN