A persistent weak layer is making problematic conditions in the BC Interior. These conditions are being reported by several sources including Michael Wigley from Kootenay Backcountry Guides, Avalanche Canada’s Ryan Buhler, Forecast Program Supervisor and the Fernie Pro Patrol’s Tyler Carson.

Wigley’s compression test demonstrates the problematic layer at 80cm. He posted, “Just want to point out this weak layer in our snowpack to keep on your radar for the winter. Dug this snow pit in kootenay pass, on a NE aspect of Mt Baldy at 1950m. Snowpack was averaging 120-140cm here. With the weak layer we have being about 80-85cm down in the snowpack. I’ve been getting consistent Easy to Moderate fails on compression tests with resistant planer results. Felt lots of whumphs (settlement) while breaking trail or stepping off the beaten path. Please don’t turn the mind off this layer!”

The Snowpack
The cold Arctic air had two major impacts on the early season snowpack. First, depending on your location, it formed at least one well-developed persistent weak layer which was buried between November 17 and 22 (referred to as the mid-November weak layer). It can easily be observed within the snowpack and has resulted in many observations of whumpfing, shooting cracks, and remotely triggered avalanches, throughout the interior. We have lots of evidence of snowpack test results suggesting that this layer has a propensity for easy triggering and propagation, making it a ‘yellow flag’ to be aware of. However, we aren’t yet seeing the amount of avalanche activity this might suggest. This isn’t because this layer isn’t unstable, but rather because the snow above it has not formed a slab… yet. 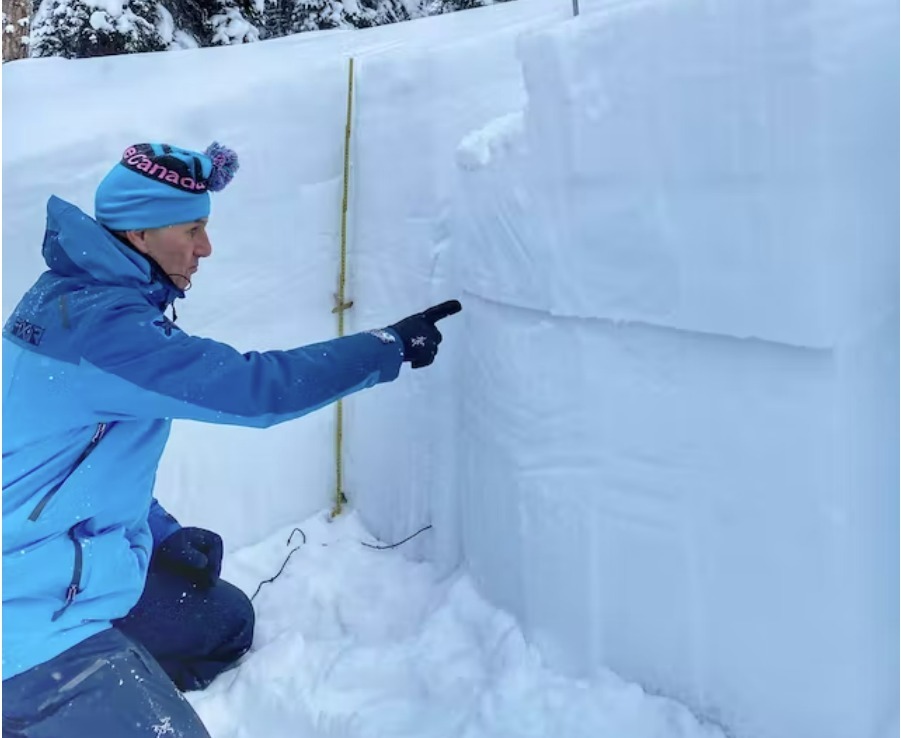 A snow profile from the Mear Lake area north of Fernie shows the mid-November weak layer is reactive and suggests that propagation would be likely if a cohesive slab was present. Photo: South Rockies Field Team

Where’s the Slab?
The existence of a highly reactive weak layer on its own is not enough to create a persistent slab problem that elevates avalanche danger. A persistent slab problem requires both a persistent weak layer and a cohesive slab on top of it. This brings me to the second condition caused by the extended periods of cold arctic air and a generally shallow early-season snowpack—an apparent lack of slab formation in many parts of the interior. Because of the prolonged cold conditions, the recent storm snow has not settled in many areas and may even be doing the opposite. The entire relatively shallow snowpack may be undergoing faceting in some regions. This is keeping the snowpack unconsolidated and prevents the formation of a cohesive slab.

We know there is a widespread weak layer throughout the interior, and therefore we would expect avalanches to be possible anywhere that a slab has formed. But the ongoing cold conditions mean it is difficult to know where slabs may exist.

The Tipping Point
We commonly refer to the period where loose surface snow transitions into a reactive slab as ‘the tipping point’. There are several conditions that may cause the current loose surface snow to transition to a reactive slab including:
• A major storm system bringing a substantial amount of new load over the weak layer.
• Wind events loading leeward features.
• A warming event or extended periods of solar radiation on steep sun-exposed slopes.
• A combination of slow snow accumulation with an extended period of milder temperatures.

We have seen a few of these conditions, especially wind loading, result in some large avalanches over the past couple of weeks. Wind loading has also been one of the main messages in our bulletins recently. Although we’re not expecting substantial warming, just a few hours of sun on steep sun-exposed slopes can be a major player in the likelihood of triggering an avalanche, as the example below shows.

These tricky persistent slab problems in the interior are very real and it’s time to match your travel to the conditions.

Be safe out there and choose your terrain conservatively.