Is Sam Kuch the best skier in the world?

In just two years of skiing with Matchstick Productions Sam Kuch has proven himself as a force to be reckoned with in the big mountain arena. Is he the best skier in the world? Hard telling. Sam sure does makes a strong case. But one thing is for sure, if you ski anything like Sam – go ahead and quit your day job. Watch now and decide for yourself.

Sam Kuch’s mom took down Chuck Norris in a quad-crippling squat challenge. The story’s a shred of Nelson, British Columbia lore: Sheila, a ripped karate blackbelt, outlasting ‘Merica’s monument of manliness in an exercise so intense it caused Chuck to faint. Of course, as these stories go, what’s recounted today has morphed substantially from actual events. Sometimes fiction is more fun. But there is truth in Sam’s mom, a former competitive gymnast, pulling off a “crouching horse stance” for a ridiculous one and a half hours, and this power and resilience might just be indicative of something else: Her son has been genetically gifted with “stompy” legs. Because there’s something special in those lower limbs that allows Sam Kuch, pro skier, to do the unimaginable.

Any skier who surfed social media this past season was subject to the Sam Kuch onslaught; an unprecedented spin here, a massive natty rodeo 7 there, an improbable line or cliff flashed here, there and everywhere. He filmed with Matchstick Productions all season and threw down with Blank Collective, too, generating a seemingly endless stream of praise from legends like Mark Abma and Mike Douglas, guys who thought they’d seen it all. That is, until this 21-year-old phenom came along. Of course, the exploits, praise and meteoric rise all beg the question, ‘Who the hell is Sam Kuch?’ 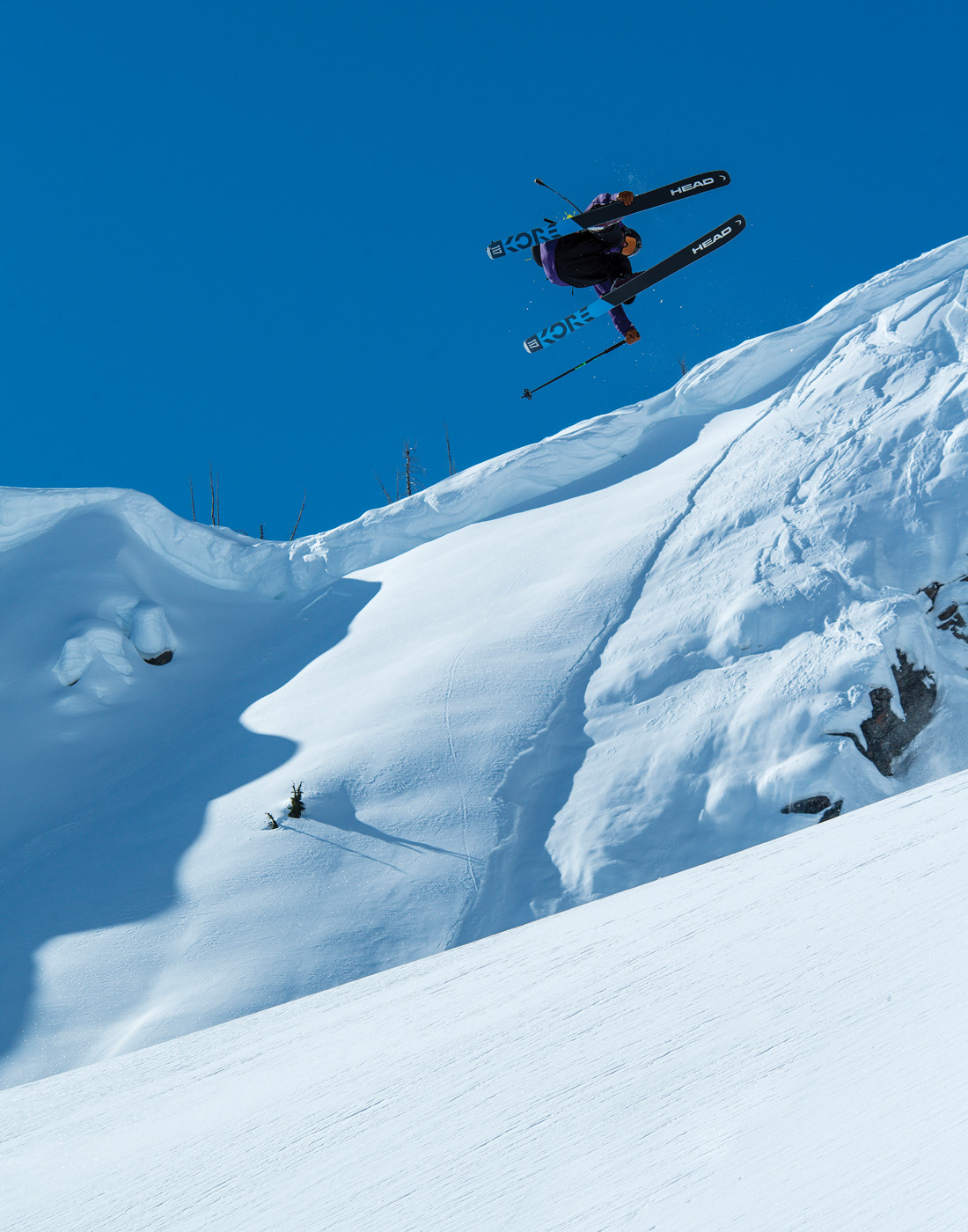 Raised in Nelson, a small mountain town with a long lineage of notable action sports athletes and adventurers, Kuch is unquestionably a product of his environment. He grew up skiing Whitewater Ski Resort, an underground gem tucked away beneath Ymir Peak at the end of a 10 kilometer, heavily washboarded dirt road.

And what terrain it is: tight trees, pillows, open fields with dongers and poppers everywhere, a thousand and one tranny snipes and short hikes or tours that access a bevy of steeps, cliff zones, remote bowls and high alpine faces. Since he was three, Sam’s been testing his mettle and talents throughout this mountainscape, first with his family and then with the progressive Whitewater freeride team. They’d spend all day lapping the intricate, funky terrain, spinning off hit after hit and building backcountry booters. 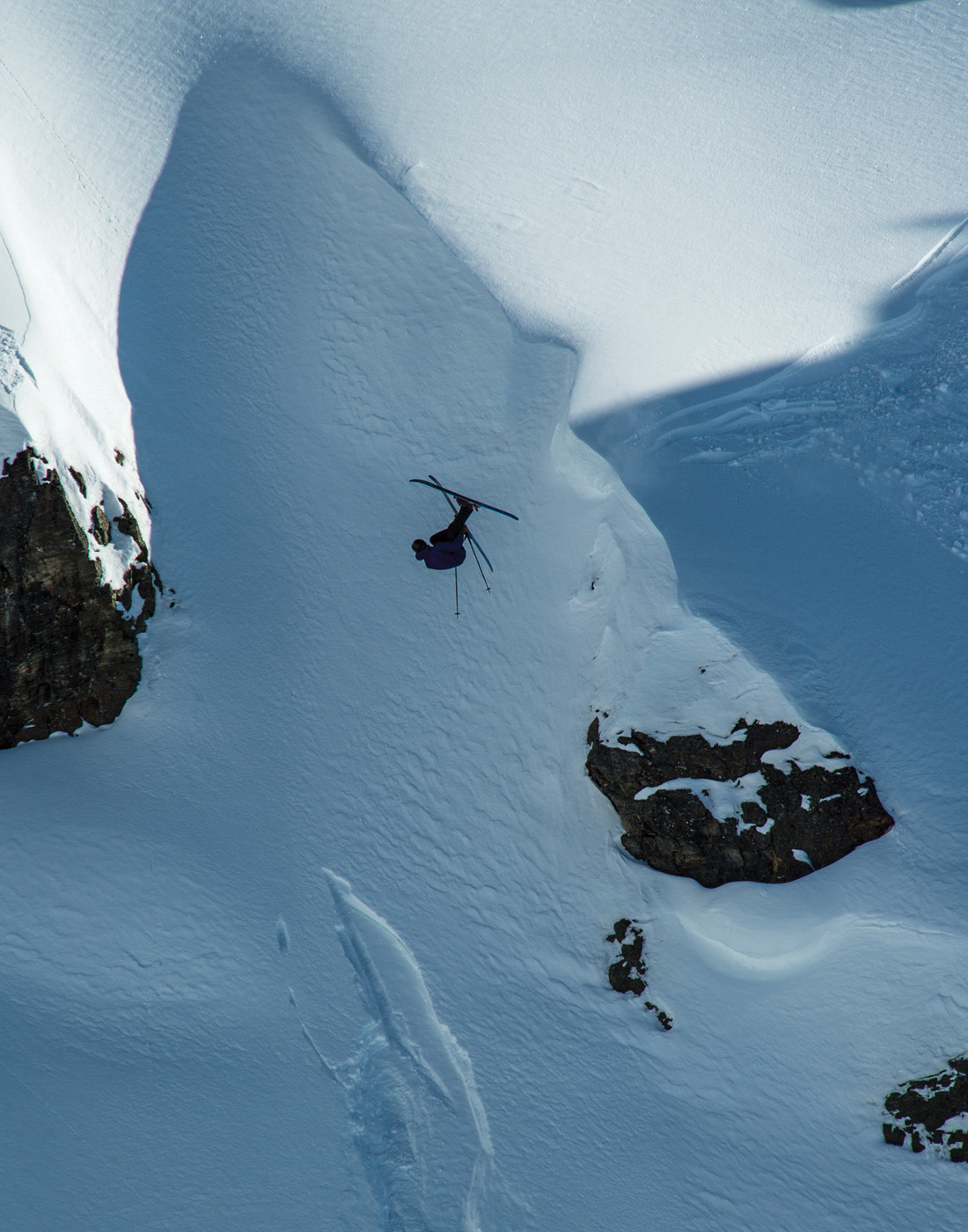 “Since a young age, Sam has been turning heads on and off the slopes,” says Trace Cooke, a fellow freeride teammate a couple of years Sam’s senior, who ultimately graduated to the big stage of the Freeride World Tour. “He’s a natural athlete who has always been incredibly comfortable flying upside down. I’ve seen his rise coming for several years now. Honestly, I’m quite surprised he went undiscovered as long as he did.”

Through his teens, Sam did take his precocious talents outside of the Whitewater bubble, competing on the Junior IFSA big mountain tour for five years, culminating in winning the overall North American Junior title in 2016 when he was 18. He consequently garnered some acclaim and a sponsorship with HEAD. But his sights were ultimately set on filming. 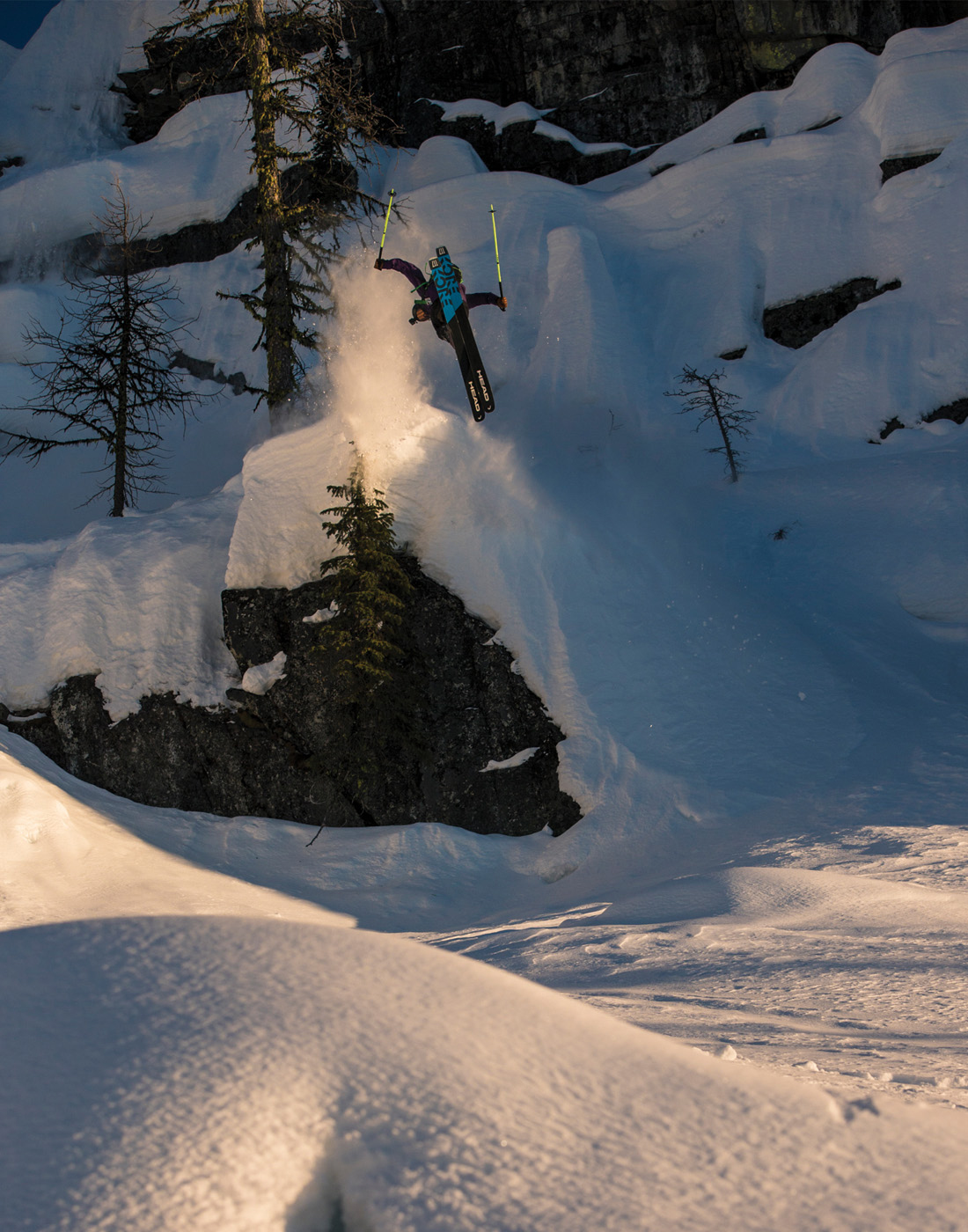 “Becoming a professional skier was always a goal for me,” Kuch says. “Although I never thought it was a realistic goal, I kept on working towards it just out of the pure enjoyment of pushing myself and my skiing. I always kept a close eye on Sean Pettit, Sammy [Carlson], Wiley Miller and Parker White. Their line choice and tricks would inspire me, then I’d go try to emulate that but with my own twist.”

If by “twist” he means spinning and flipping, yes, there’s a ton of that in Sam’s skiing. He spins off of everything, and he’s got every trick in the book between a 180 and dub 10. Sure, that doesn’t seem particularly remarkable in this day and age, except for the glaring fact that unlike just about any top pro with a vast freestyle repertoire, Sam Kuch grew up without a real terrain park. Manicured man-made terrain was far from Whitewater’s specialty.

“I love skiing park, but I haven’t spent much time in [them] at all,” he says. “Most of the tricks I’ve learned have been on hand-built booters with buddies or on natural features around the mountain.”

And that is where Sam Kuch truly shines: making the natural mountain his park and playground. He exquisitely meshes incredible air awareness from intensive trampoline experience as a youth —remember, his mom was a gymnast—with the vision and skills of a kid who grew up focused on exploring and shredding gnarly terrain. He pieces together incredulous lines, accurately sizes up questionable gaps, finds a bizarre comfort in seemingly awkward takeoffs and odd trannies and then he corks and floats and stomps, stomps, stomps. His skiing is a thing of beauty, really. 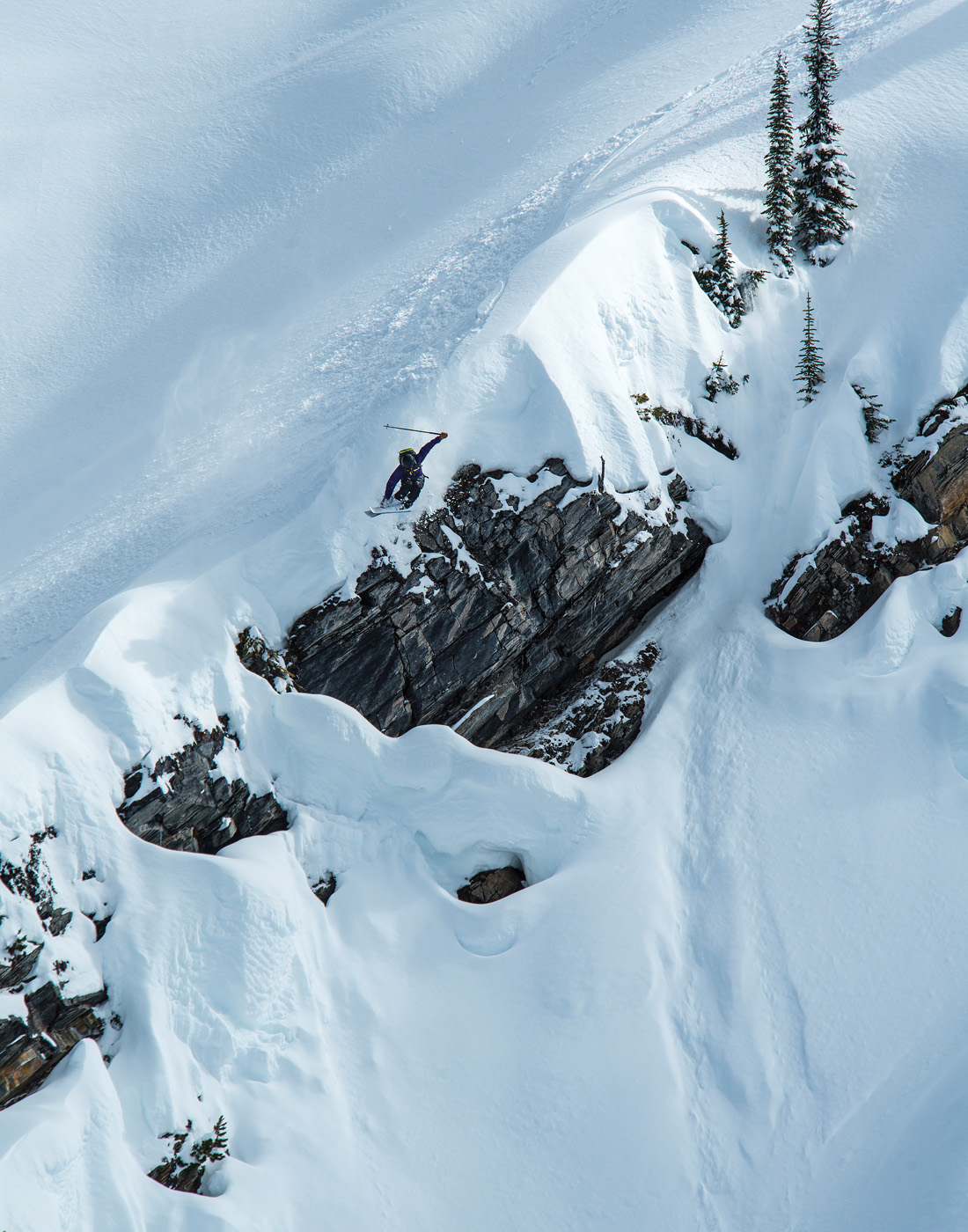 But a complete absence of braggadocio was never going to propel Sam’s ski career, and the opportunity for exposure in down-home Whitewater paled to the limelight of, say, a Whistler, Jackson or Squaw. The only people really privy to his act were Whitewater locals and junior big mountain competition spectators. For the most part, Sam was just a young local roofer who ripped, plain and simple. But when pros Stan Rey, Anna Segal, Alex Beaulieu-Marchand and Mike Riddle rolled into Whitewater in March 2018 to shoot an episode of the online series Beyond the Powder Highway, Nelson-based photographer Bryan “Ralphie” Ralph told filmmaker Jeff Thomas he had a local kid they might want to have show them around. “Ralphie said some pretty spectacular things [about Sam] so I was intrigued and thought maybe we’d get a few shots to add into the episode,” recalls Thomas. “I did not expect him to be the best skier I had never heard of before.”

Sam seized the opportunity to edit the script in dramatic fashion, slaying line after line, tricking and sticking and all but stealing the show. “There’s this crazy triple pillow cliff drop,” Thomas recounts of one of Sam’s particularly rowdy lines consisting of an eight-foot air and turn to a 30-foot air to another immediate 30-footer. “Both Anna Segal and I dropped F-bombs while filming that. He was like a bunny rabbit bouncing down the side of the slope.” After a mere day-and-a-half of shooting, 12 out of 14 shots of Sam ultimately made the final cut, an almost unheard of ratio even for the most elite pros.

The episode dropped in the fall of ‘18 and immediately landed Sam honors as “Discovery of the Year” at the International Freeski Film Festival (iF3). As a director at Matchstick Productions, I’m always keeping an eye out for new talent. Cody Townsend encouraged me to check out the Powder Highway episode, prefaced with, “Stan Rey claims Sam is like Candide and Sean Pettit put together.” I was skeptical, of course. Candide plus Pettit? Come on. That had to be hyperbole. But I watched, and instantly became a fan.

With our 2019 MSP film, Return to Send’er, we planned to channel our focus to just four athletes who would all receive major personal segments prior to uniting for a heli trip segment to close out the movie. To contrast the talents and experience of Mark Abma, Karl Fostvedt and Logan Pehota, I thought introducing a relatively unknown newcomer would be intriguing. From MSP’s end it was a bit of a gamble; from Sam’s end it was a dream slot that carried a lot of pressure. Individually providing ten minutes of the highest-caliber content is no easy task even for a seasoned veteran. Could a veritable rookie live up to the challenge?

Fast-forward several months past what Sam calls “the season of my life,” and suffice it to say, he didn’t shy away from the bright lights. Who am I kidding? Sam blew us all away. He left an indelible mark on anyone who had the privilege of watching The Sam Kuch Show in person. Among the new Kuch fans is Karl Fostvedt, who himself had a masterful season of skiing. “I can’t believe I had never heard of Sam Kuch before this season,” he says. “Every single day I went out skiing with Sam he was puttin’ ‘er to the bar and sending it to the moon. He has a knack for picking out big airs and always riding away clean. The old slogan, ‘If you ain’t crashing, you ain’t trying’ does not apply to Sam Kuch.”

Tracked by MSP lenses, Sam toyed with his home terrain at Whitewater, launching massive cork 7s and backflips wherever he pleased and becoming the first skier to spin the iconic Prospector Cornice, a blind 40-plus footer into a near-vertical, fluted face peppered with rock.

In February, he ventured to the showtime coliseum of Squaw Valley where his spins, backflips and butters dropped the jaws of jaded locals; this included his first-ever run into the fabled Fingers where he stunned the KT-22 chair crowd by busting and stomping an unprecedented 360 off of Main Air, arguably Squaw’s most notorious cliff drop. For the culminating segment in Return to Send’er, in March Sam rallied big peaks outside Revelstoke from a chopper and then in April, he helied with Blank in the Coast Mountains of B.C.—putting together a full segment in a separate film in just a matter of days.

Finally, the kid who didn’t grow up skiing park closed out the season at a HEAD shoot at Mt. Baker by throwing multiple double variations off massive hand-built wedges alongside the likes of Olympians Aaron Blunck and Evan McEachran. In a single season, Sam Kuch transformed from virtual unknown into one of the most wanted, mind-blowing freeskiers in the sport.

One March afternoon in the Whitewater lodge, while taking a momentary break from his routine send-fest, Sam struggled with the gnawing dilemma of telling his boss of four summers that he’d no longer be spending the off-months on sweltering rooftops rolling out underlayment and tacking asphalt shingles. With his ski career rocketing into hyperdrive, Sam could put the full-on ski bum grind in his rearview, yet he was still burdened by the guilt of letting someone down as he moves forward. That’s the kind of guy he is. But for Sam, “moving forward” doesn’t mean he’s now putting regular life in cruise control; he simply has choices, and one such choice is to experience a more personally meaningful summer working carpentry alongside his dad while nurturing his ski dream.

It’s all happening swiftly, albeit naturally, for a guy who lets his skiing do the talking. “From a personal standpoint, I hope this all leads to a prosperous life of satisfaction and fun, doing what I love most, all in good health,” he says. “I also hope to inspire other skiers and keep the stoke of this fantastic sport alive.”

As a lucky first-hand eyewitness, I can assure you Sam Kuch is doing just that.