Over a decade ago David Harley, founder of Valhalla Pure Outfitters, bought a 1,040-acre land parcel just outside of town near the old mining town site of Three Forks. The valley between New Denver and Kaslo held nine villages at the height of the 1890 mining boom. Only the ghost town of Sandon remains. This parcel encompasses the lower part of London Ridge which rises to the summit of Whitewater Peak at just under 2,800 meters. Over the years, David’s slowly developed a plan for a small off the grid village, a small ski area and a large backcountry zone.

The plan was named after the ghost town of Zincton, located between Kaslo and New Denver. It was presented as being a radical departure from existing resorts.

Earlier this year Zincton submitted an Expression of Interest (EOI) which culminates in the approval of a Master Plan and a Master Development Agreement with Province of British Columbia. As proposed, Zincton would be a new all-season resort located along London Ridge and Whitewater Ridge. The EOI represents the first of three stages in the all-season resort development application process as detailed in the All Season Resort Policy and All Season Resort. Now Zincton is preparing to present their master plan. 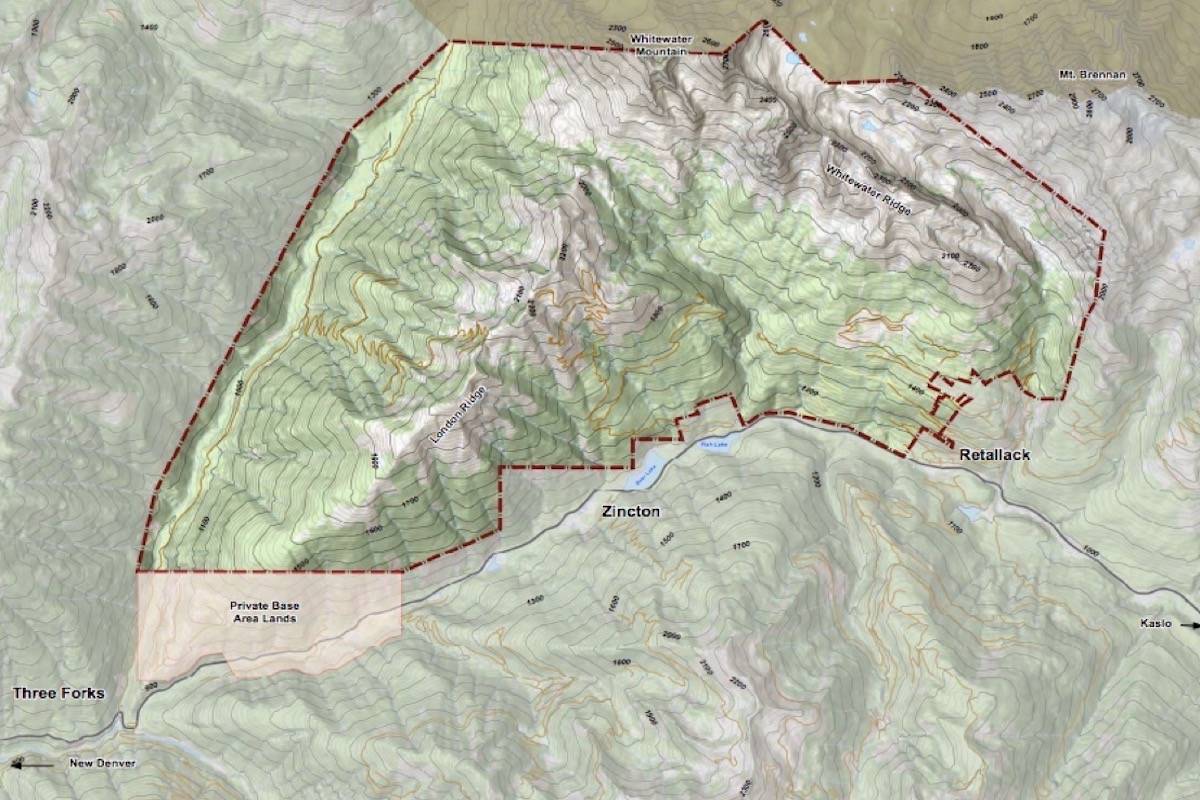 Narwhal recently ran a piece on the proposed Zincton development between the West Kootenay villages of New Denver and Kaslo. The lead sentence in the second paragraph was enough to set off an uproar. “Zincton Mountain Village would cover 4,500 hectares of private and Crown land.” That statement is false. Other than that first statement, the article presented an even-handed look at the development proposal and the issues of growth in the rural Kootenays and preservation of wild space. Wildsight also published an article calling the project a massive ski resort development and stating that it threatens wildlife.

The Tenure Permit request is for 4500 hectares of land. The Village itself will cover about 70 acres of nearby private land, and size is severely restricted by the nature of the terrain. There will be four or five lifts in the area just above the Village. The bulk of the private land and the permit area, over 80%, will remain undeveloped for backcountry skiing.

The Jumbo Wild FaceBook page picked it up. Of course, most of the people objecting have no idea of the economic stress the people of the West Kootenays face. These folks reflexively say “No” after they arrive in the neighborhood and secure their piece of paradise.

The clear economic benefit mountain communities found in developing eco-tourism to repair their failed local extractive economies should not be dismissed. How do communities like New Denver, Slocan, Nakusp and Kaslo move ahead without some sort of economic boost to at least keep them even and stop the backsliding? The New Denver population dropped in excess of 7% over the last census (2006-2016). In that time, the population of BC grew almost 6%. That puts New Denver at a negative 13% growth in relation to the province as a whole –funding follows growth, not decline. Over half the population of New Denver is over 65. They’ve been fighting for years to keep their hospital.

Zincton Village is a low-impact economic generator on private land. The Village will occupy 70 acres of that parcel. They’ve set it up to reward Owner Operators. The lift company doesn’t want to run anything except lifts, safety, roads and reservations. A small custom ski brand plans on moving to Zincton–brewers, roasters, retailers, restaurants, daycare, hot pools, massage and wellness entrepreneurs will incubate and innovate in the Village. Some commercial Village locations will have residences above. Mountain employees will live in on-hill residential enclave to minimize commuting. People will work in Zincton and will live in Zincton. 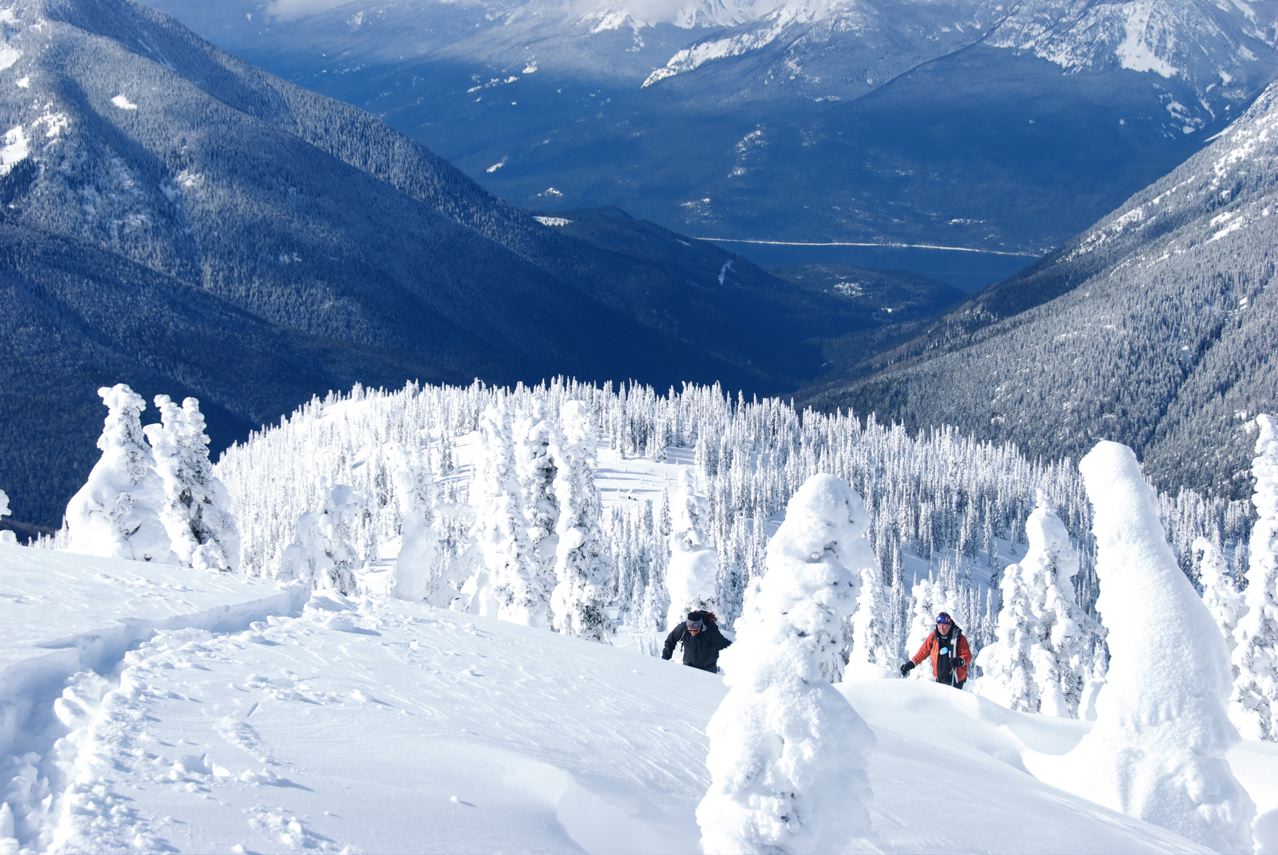 While other ski areas worry about snow, over the last twenty-five years the Zincton snow survey plot at 6,000 feet registered an average of sixty feet annually. The terrain ranges from open groves of aspens to alpine meadows, from gentle to frightenly steep. While a small portion will be lift served, by setting over 80% aside for touring, Zincton will carry on a Kootenay ski tradition started in the 1890’s. All the touring terrain will be open to the public at no cost. The backcountry terrain borders Highway 31A and there will be a staging/parking area near the lakes. Seven rescue huts will be established in the backcountry area to facilitate the occasional rescue. Local residents currently face a four-hour drive on winter roads in the dark with their families to ski Whitewater, Red or Revelstoke. This proposal will open huge local recreational opportunities for residents.

Saying this will be a Whistler or a Vail is not a viable argument. Surrounding the proposed Village, there is no additional flat land. Mother Nature has imposed strict limits on residential size, and instead maximized the skiable terrain. Isn’t she always right? Let’s follow her guidance.

The Zincton Project will add roughly 75 people the first year. The lift company, the numerous enterprises in the Village, the construction buildout, and the surrounding economic uplift will create 200 to 250 jobs in the area during the build out. At full size, the Village is projected to have 250-300 residences. New Denver and Kaslo will also add residents as the Zincton creates further opportunities. Community services—hospital, schools, stores, gas stations, day cares and so on–will fill and grow. This will add the population New Denver and Kaslo need to maintain their current provincial service funding.

With extraction industries shunned, there are few options for remote rural villages in the West Kootenays to build and improve opportunities for their families and children other than ecotourism. Ecotourism was the carrot to small communities as logging and mining was shut down.

Is a backcountry, sub-70-acre ecotourism project a viable pathway forward for small mountain communities? Zincton will use “certified green” Climate Neutral local hydro power. There will be a solar farm at elevation (in the sun). The community will have greenhouses for extending the growing season. The Village will essentially be as self-contained as possible and draw on local services as little as possible. The idea is to add to the surrounding communities, while not creating additional strain.

I think the answer in this case is clear. Yes. Zincton will be the Tesla of ski areas – green, clean, local and complimentary to its neighbouring communities. And with sixty feet of Selkirk powder waiting, what’s not to love?