To those getting out right now, we salute you. We say it every year at this time, but remember, if it’s deep enough to ride, it’s deep enough to slide. We’ve had a wild mix of weather already this season, and we are just getting to know our infantile snowpack. There are crusts that could act as bed surfaces for avalanches to run on. Conditions change dramatically with elevation this time of year and you need to watch for slab formation, especially in wind exposed features. Although dreams of deep powder riding are dancing in everyone’s head, the reality is a little different on the ground. If you get to a spot and it looks thinner than you anticipated, don’t be afraid to back off. Take it easy out there and keep your riding conservative. It’s a long season and it’s just getting started.

Early season can be so fun but it’s really important to keep some perspective at this time of year. Where there is rideable snow, it’s thin. Seriously, it’s thin. And it’s not just avalanche hazard we have to be concerned with—buried stumps and rocks are just below the surface. We’ve learned of a couple of serious non-avalanche accidents already due to thinly buried rocks. One of these incidents tragically resulted in a fatality. It’s so, so easy to blow your season by twisting a knee, wrecking your sled, or worse right now. If you’re headed out, do your best to keep you and your buddies in check. Our winters are long and you don’t want to get sidelined in the first game.

In many ways, it feels like November came early this year. After the cold snap broke earlier this week it’s been wet & soggy at valley bottom through much of BC. This has likely been a good thing at upper elevations where moderate temperatures and consistent precipitation are thought to be building a reasonable base to our snowpack. A lot of this blog is conjecture based on very few observations, but huge thanks to everyone who’s been posting to the MIN (Mountain Information Network). All of you keen early season shredders are our eyes and ears right now. I really appreciate the stoke and passion that gets folks out into the alpine in October.

There are basically four different snowpacks in play right now across the mountains of Western Canada:

It looks like the South Coast, Sea to Sky and South Coast Inland regions have a pretty homogenous snowpack where the average alpine depth is about 50 cm, but the deepest places could have as much as 150 cm. Treeline is thin, just 0 to 60 cm on average, and there really isn’t much snow at all below treeline. All the photos I’m seeing from the South Coast Mountains make me think that it’s pretty thin out there, but folks look to be having a good time, which is sweet. Headlines like, “not as bad as we thought,” and “pretty boney, but got some October turns” seem to sum it up pretty well. Take a lap through the South Coast Touring Facebook group for more details. 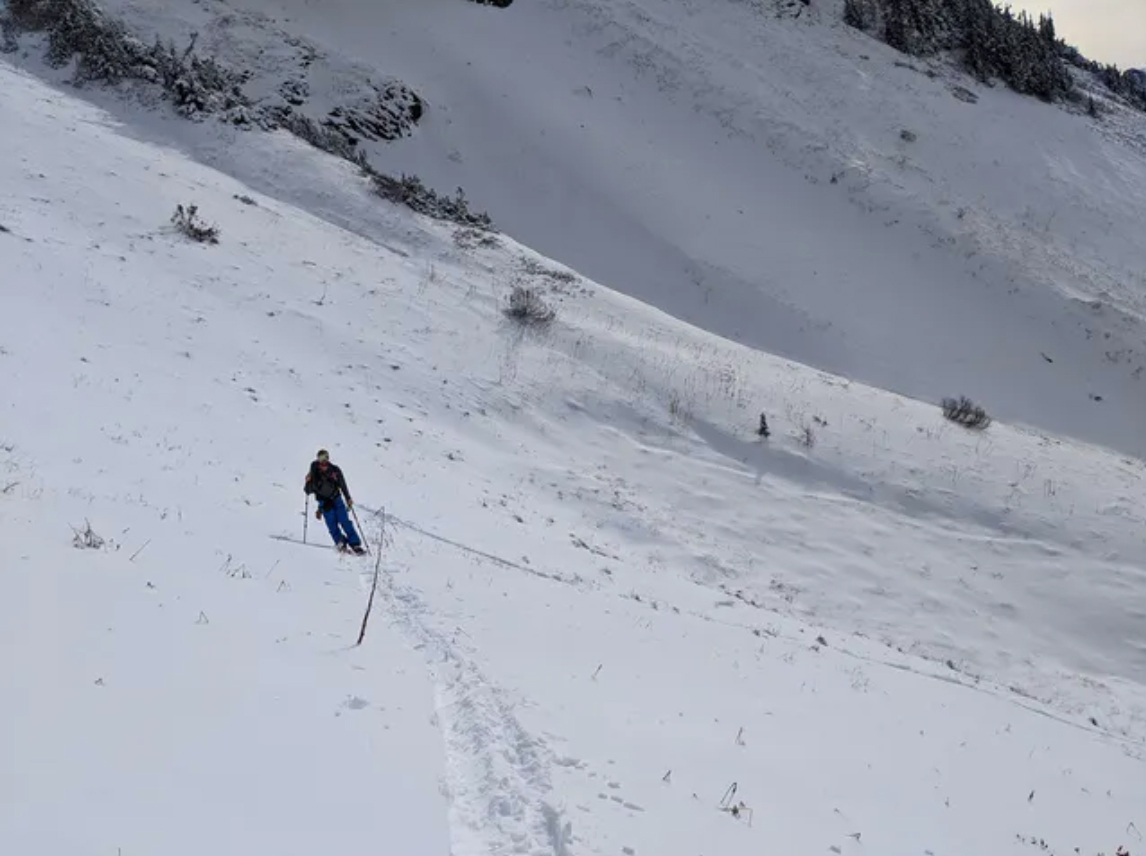 This includes the Cariboos, North Columbia and South Columbia Region north of Nakusp. The alpine has an average of 55 cm of snow, but there are plenty of alpine features with no snow, and some that have as much as 125 cm or so. You might be able to find a deeper spot for the ‘gram, but they’re hard to come by. Southwest winds started to pick up Friday morning and there’s been around 20 cm of snow over the last 72 hours. At treeline the average snowpack depth is more consistent than in the alpine—there, you’ll find an average of 80 cm of snow. The lower 40 cm are starting to become well settled while the upper 40 cm is all new snow from this week. The Frozen Pirate was sailing Friday in Allan Creek near Valemount. He reported 55 cm of moist snow just below 2000 m. Treeline ranges from no snow at lower elevations to as much as 100 cm in favoured locations at upper treeline.

Folks are getting out and skiing at Rogers Pass and the Gorge. The coverage actually looks decent above 1700 m or so, but it’s sporty below that and you need to be on your toes at the lower elevations. No one wants to fall in a creek or nail a stump, which are very real hazards at the moment. 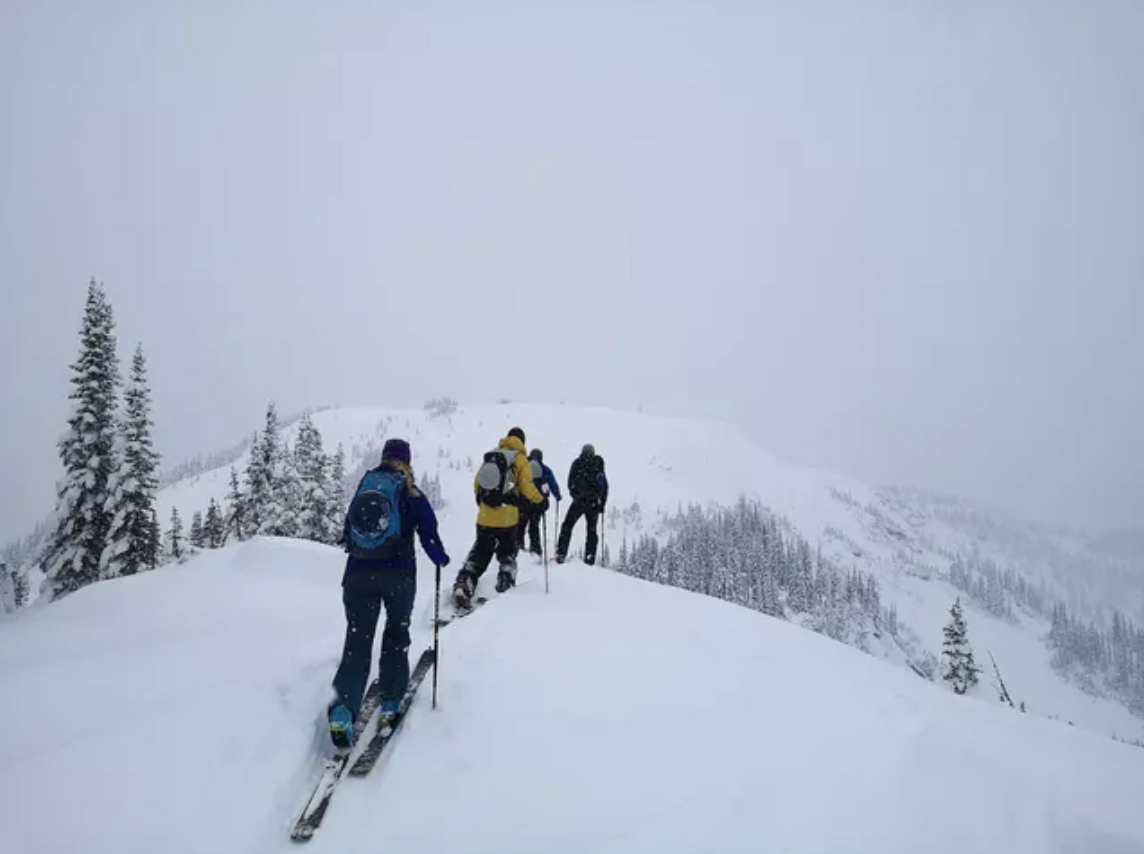 This includes the South Columbias south of Nakusp, Purcells, South Rockies, Lizard Flathead and most of the Kootenay Boundary region. (The exception is Kootenay Pass, if you’re headed there read the description for “The Interior.”) As you probably guessed by the name, it’s pretty thin in these areas. About ⅓ of the alpine in these zones has significant snow in it. Where there is snow, the alpine snowpack averages 35 cm in depth, but the deeper zones could have as much as 70 cm in them. Summit Mountain Guides managed to find 60 to 80 cm of supportive skiing between 1900 and 2250 m in the Southern Purcells earlier this week, but they commented that there was a fair amount of wind affected snow at ridge crest. Treeline has about 30 cm of snow on average, and it’s thin below treeline—just 0 to 25 cm of snow in the trees at this time. The Chinook’s got into the east slopes over the last few days which means it’s been pretty warm and windy on the east side of the Rockies. Early season ice climbing is here, and we’re getting some good reports on the MIN about current conditions, which is awesome to see. 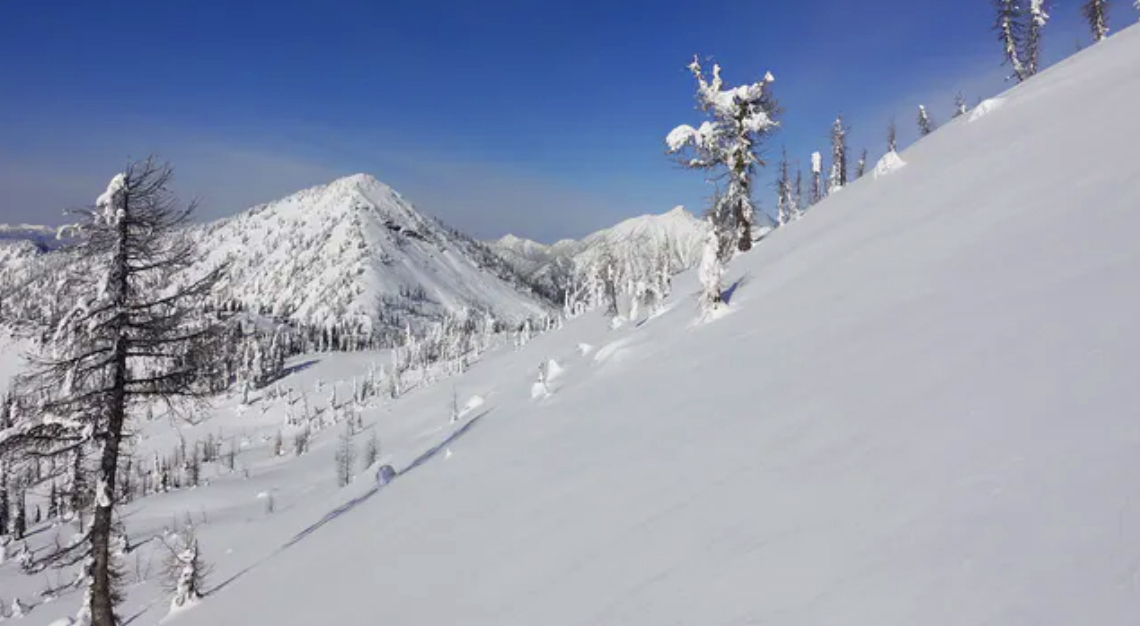 The (even thinner) North:

This includes the southern portions of the Northwest Coast and Northwest Inland Ranges, and all of the North Rockies Forecast region. The most recent pulse of precipitation appears to have fallen as rain on all but the highest peaks. About ⅓ of alpine slopes in this part of the world have snow on them and the average height of snow at both alpine and treeline elevations is about 50 cm, but you may find as much as 70 cm in favoured locations. It gets thinner as you get into the trees, where an average of 30 cm can be found. We don’t have any other observations from the north, so if you’re getting out, please let us know what you’re seeing on the MIN. The northern portion of the Northwest Coast, Northwest Inland, and all of the Yukon look to be even thinner, where the average height of snow at and above treeline is about 20 cm and mostly made up of crusts.

As you begin to prepare for your first forays into the backcountry this season, check out our weekly webinar series. Forecasters and special guests are covering a wide range of topics—find more details and a complete schedule here. We’re also recording each one and hosting them online in case you can’t attend them live.

Be safe and please let us know what you’re seeing out there.