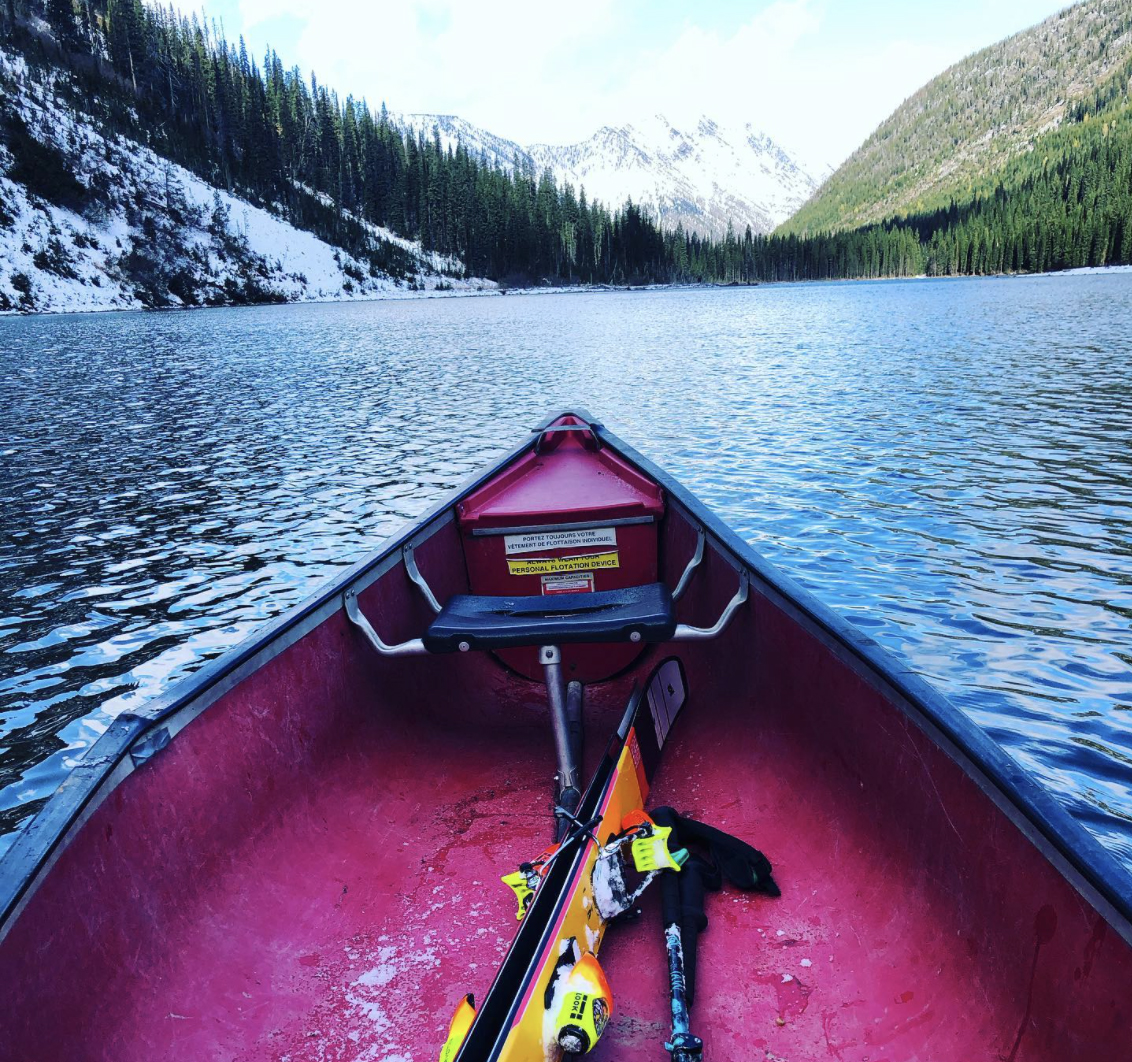 Winter came early this year and my friend Luke and I took advantage of the premature snowfall. Most years we fill our time ice skating in Autumn while it’s cold and not quite ready to snow, but this year things are different. Before it got cold enough to freeze the lakes it snowed, so we busted out my canoe for one last paddle, and for the first time ever, I loaded it with ski gear.

We arrived at our destination, sitting at a perfect 1600m elevation, just above the snow line. We had fresh tracks up the 4×4 road to the (canoe) staging area. We unpacked the truck and threw everything in the boat and slid it down towards the lake. Luke even rode inside for a short time.

At the edge of the lake we admired the small piece of glacier. We could see a perfectly shaped entrance that went inside of it. We hoped it went all the way through to the top. If we were lucky, we could climb underneath surrounded by ice and emerge at the top of our ski run. Without hesitation we walked into the water with our ski boots on, pushed off and headed across the lake with the wind at our backs.

Once we reached the other side and paddled into shore the size of the glacier and its underground world became much more apparent. When we first set eyes on it from across the way I imagined us having to duck to get inside, but I couldn’t even touch the roof of the entrance with my paddle, and once inside it became even more marvellous. There was a small creek with water running along the floor of rock. There were multiple skylights or crevasses if we were on top, and looking down towards the lake were multiple exits. Like we hoped, the ice cave led up to a hole where the glacier met the mountain, an access to the top where we would step into our skis and ski back down to the canoe.

Now we were faced with two options. The climb up through the cave looked pretty technical. Especially in ski boots. The easy way would be to go above ground, up the snow, but we felt adventurous so up the rocks we went. The first half of the climb was fairly straight forward. Still challenging, having to find tiny little holds for the toe of our boots but the exposure was minimal. The second half on the other hand was by far the craziest ascent I have ever done. Half of the rock was now covered in ice, the toe holds were fewer and farther between and there was way less to hold onto. Also our skis were almost hitting the roof of the glacier but at this point there was no turning around. We were committed. Luke went one way and I went another. Both were sketchy. I don’t remember even breathing for about five minutes as I clung to the rock. Now we were exposed and falling was not an option. When I made it through that section I took a huge breath, looked at Luke and said, “Well that was stupid!”

“Ya, we’re not even at the top yet,” He replied as he looked up at the last part of our climb. At least now there was some snow on the rocks to dig into and we made it up without any lack of breathing. The last crux was now finding a way onto the glacier, we were still technically below it. A few kicks with the boots into the ice we made a ladder and after a few attempts made it onto the snow. Most people would consider the turns we made were mediocre, but it was skiing! In October, this trip was about more than that.

After we loaded the canoe and paddled off away from the glacier and back into the sun, Luke half turned around in his seat and said, “That was more than a mission, that was an expedition.”

On our strokes home, as our paddles exited the water we noticed the droplets would almost freeze before they hit and stay suspended on the surface like little frozen ball bearings, reassuring us that winter is here to stay.