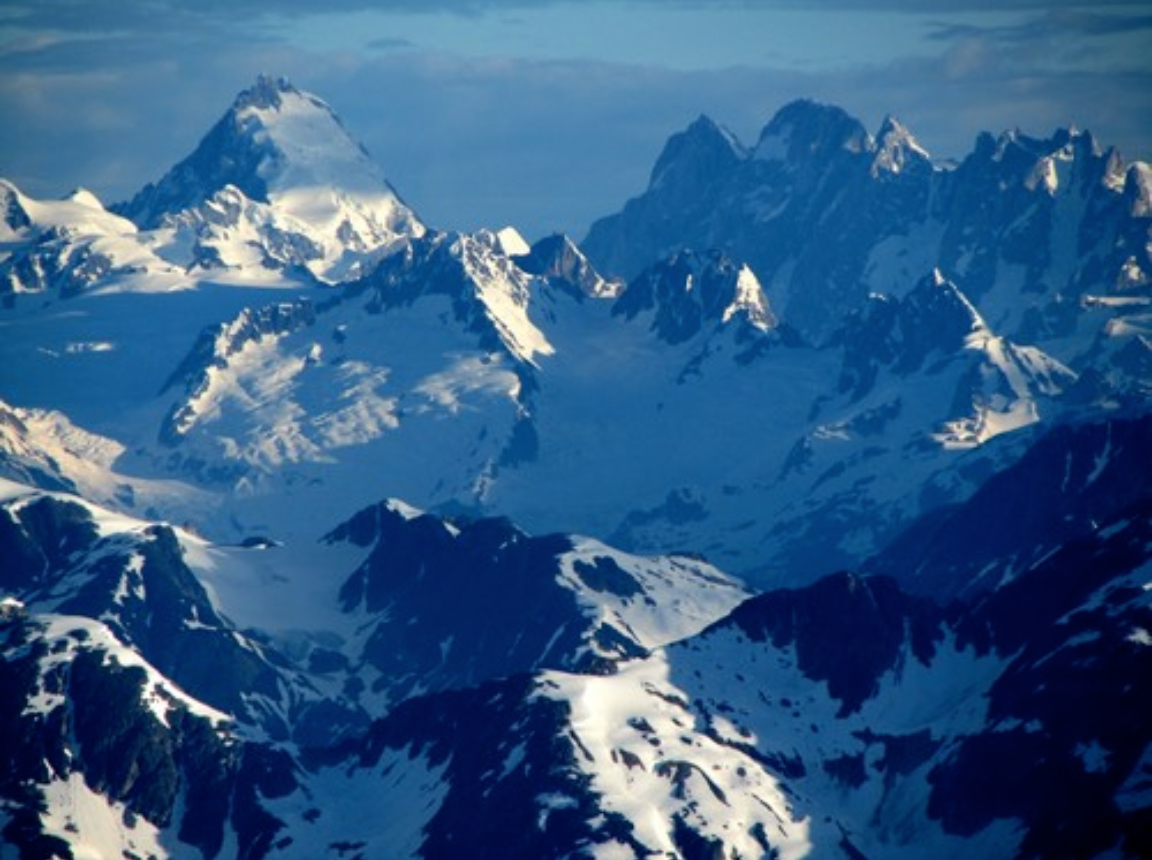 It is not so far north as its extreme Arctic-like conditions might indicate and Mount Waddington and its attendant peaks pose some of the most serious expedition mountaineering to be had in North America — and some of the most extreme relief and spectacular mountain scenery.

From Waddington’s 13,186 ft (4,019 m) fang to sea level at the heads of Bute and Knight Inlets is only a few miles; across the 10,000-foot-deep (3,000 m) gorges of the Homathko and the Klinaklini Rivers stand mountains almost as high, and icefields even vaster and whiter, only a few aerial miles away, with a maw deeper than the Grand Canyon, comparable in relief to the Himalayas.

In 1925, while on a trip to Mount Arrowsmith, Vancouver Island, Don and Phyllis Munday spotted what they believed to be a peak taller than Mount Robson, then accepted as the tallest peak entirely within British Columbia. In the words of Don Munday, “The compass showed the alluring peak stood along a line passing a little east of Bute Inlet and perhaps 150 miles away, where blank spaces on the map left ample room for many nameless mountains.”

Over the next decade, the Mundays mounted several expeditions into the area in an attempt to climb it. Known to them as “The Mystery Mountain” they reached the lower summit in 1928, deeming the main summit too risky.

In 1986 Beat Steiner, a founding partner of Bella Coola Heli Sports, and his hearty group from Extreme Explorations documented the first ski descent of Mt. Waddington. Steiner, Peter Chrzanowski and the late Trevor Peterson and Stevie Smaridge carved Mystery Mountain’s first ski turns on Angle Glacier from just below the summit nob on the North West peak. The groups expedition was cut short when a wolverene entered their camp and ate their remaining food. In 1988 Steiner returned with Eric Pehota who skied the summit nob, which is maybe 100 or so vert at 50 degrees. Nobody has skied the main peak, and nobody will, because it’s just rock with no snow coverage. Steiner was mesmerized by the beauty and magnitude of Waddington and it’s very suiting that Bella Coola has heli ski tenure there today.

Fast forward to April 2019 when John Eaves heli skied Mystery Mountain with Aspen folk Gina and Jerry Murdock, and Matt Holstein, based out of Bella Coola Heli Sport’s Mystery Mountain Lodge. John Eaves is best known as a World Champion Freestyle skier and a James Bond’s ski stunt double in the 90’s. You most certainly have seen him skiing in several 007 films, including For Your Eyes Only and A View To A Kill and even for Jackie Chan in the 1996 film First Strike which saw him skiing off a cliff and holding onto the skids of a helicopter!

Obviously helicopters don’t scare John much, so Bella Coola took Eaves and his ski buddies to Mystery Mountain to ski some of the most remote and epic alpine terrain in the world.

Eaves commented on the terrain, “When you get there you quickly forget your journey because you are so damned blown away at your new environment. The most outstanding point being the relief of the mountains surrounding you. If I could compare Bella Coola’s tenures to anything it would be Himachal, simply because of the enormity of the place. Once out in the terrain one feels absolutely humbled. The skiing…well…it’s special. It has to be experienced. Skiing around Mount Waddington was so good!”

Here is a preview of some turns from Eaves time at Mystery Mountain Lodge!

For your chance to heli ski Mystery Mountain visit here.