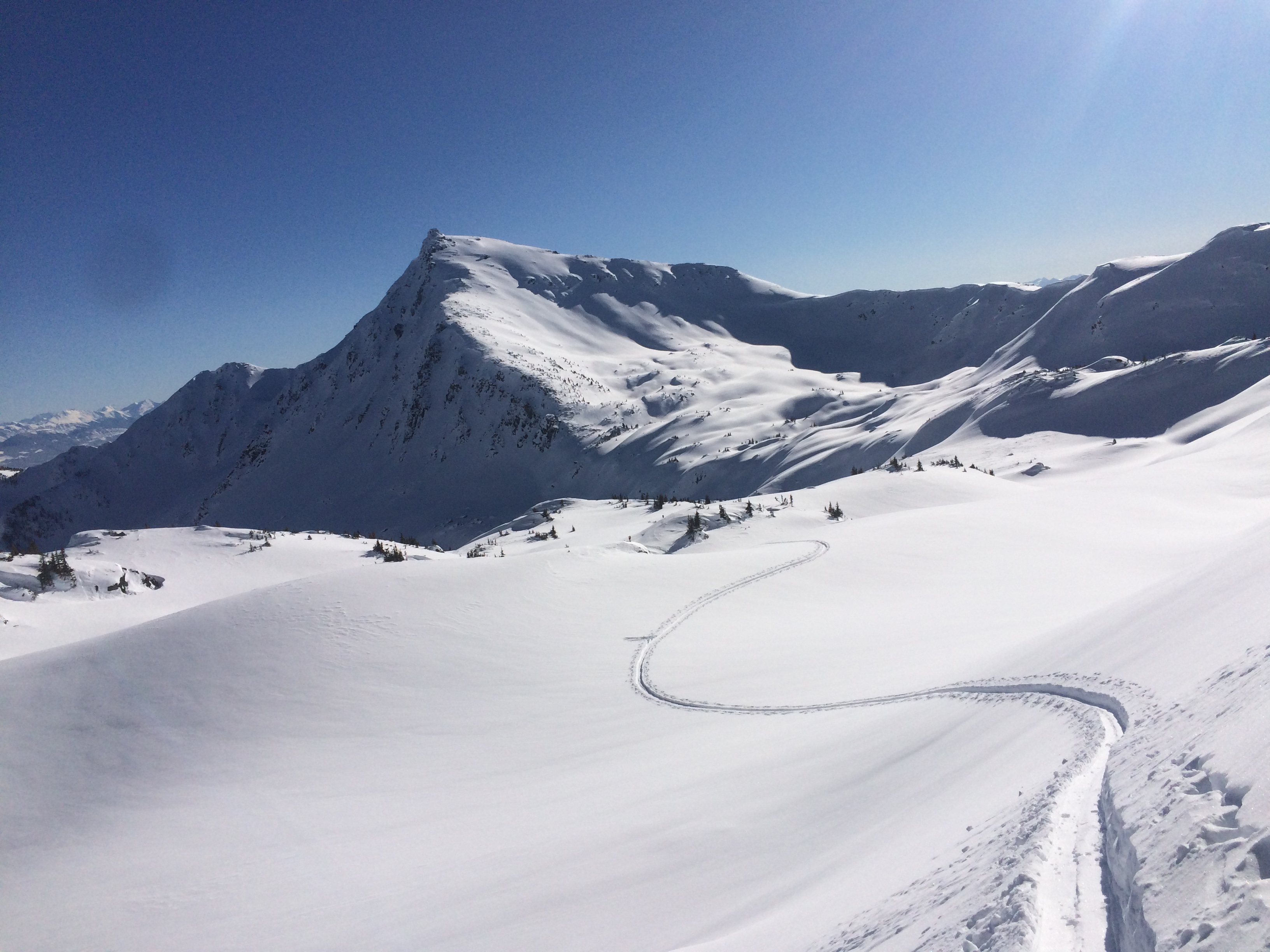 The snowbanks were so big on the drive up Rogers Pass that I drove right past the parking lot for the heli-pad. I checked my rearview, seeing no cars behind me I slammed on my brakes, reversed down the highway then entered the slit in the bank. The cars from the other groups that had been there for the week were completely buried. As I turned off my engine I could hear the buzz of the helicopter, between that and the snow I could hardly contain my excitement. This was going to be a wicked week!

Two short days before, I was at work at GearHub in Fernie. It was the start of my 4 day work week and all seemed normal until my pocket buzzed and I answered to hear the voice of an old friend from my competition days. He and a few buddies were rolling through town and wanted to stop in and say hello. Little did I know, they had a surprise to lay on me. Thirteen of them had the Meadow Lodge booked for a week and there was an extra spot. They were continuing on to Golden that day and I had 24hrs to get my shit together and meet them there. Luckily for me, I have a flexible schedule and an awesome team at GearHub and they pooled together to cover my shifts. Before I knew it I was off.

The trip started with an exciting night drive. It rained the entire way, and I hit some puddles that were more like lakes that threw water over the roof of my truck. After a painful 30 kilometres of driving 70km/h I made it to the hotel they were staying at. We slept for a few hours then in the morning I met the rest of the crew. We shook hands in the dark parking lot off of the Trans Canada Highway then headed for the Pass. 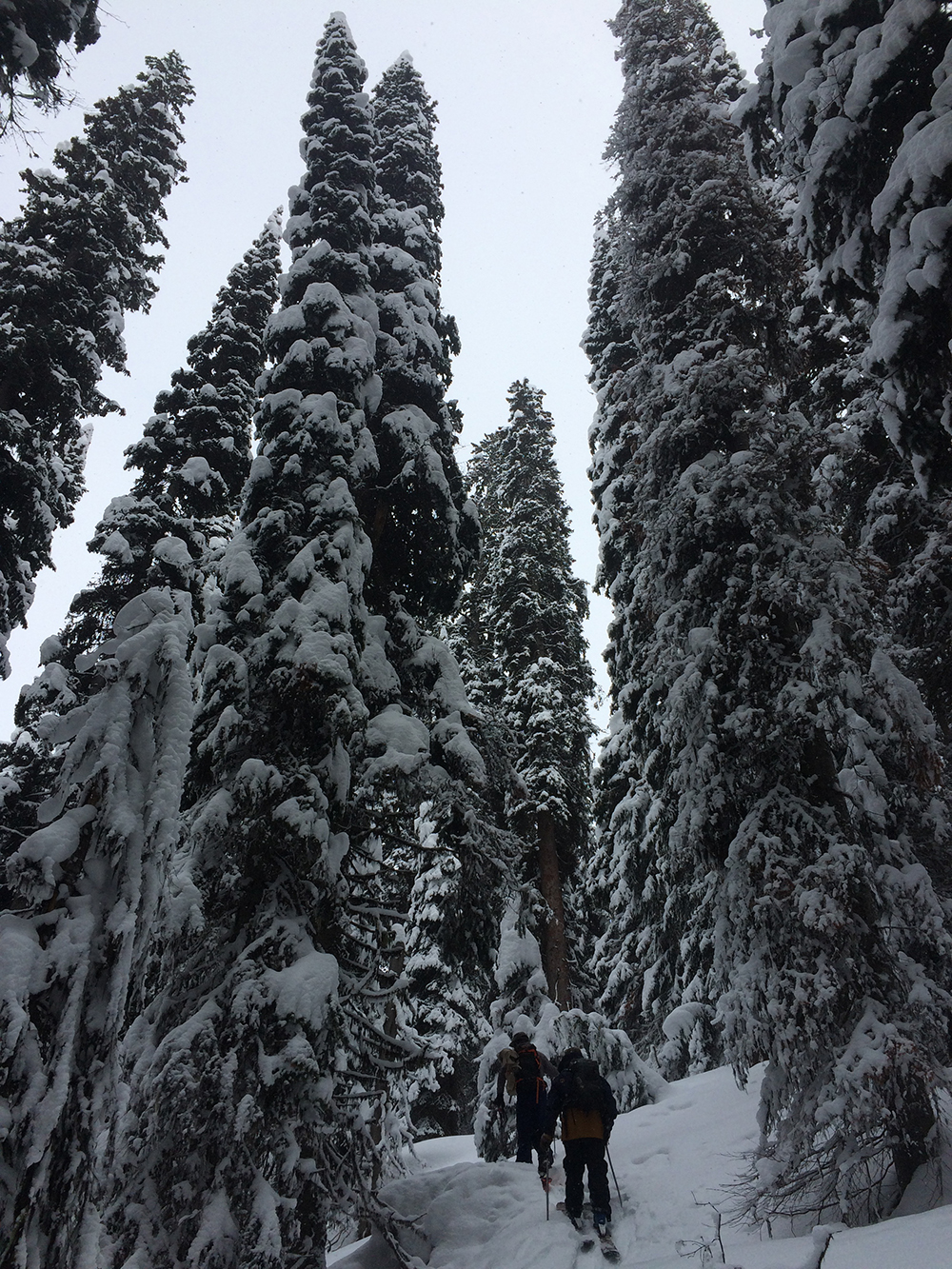 It had snowed 45cms of cold smoke that night and it was still -20 with no sign of it warming up. The clouds were low and we were lucky to fly, but we made it to the hut. All 14 of us, our ski gear and our excessive amount of beer, which was the first thing the crew did when we landed; cracked a beer and started making a toboggan course on a small slope above the cabin.

We had seen a lot of fresh avalanche activity on the flight in. That day was a write-off, but while most of the gang focused on the toboggan course, I stuck my skins on my skis and went around the corner to a slope and dug a couple of test pits to get familiar with the snowpack. It was very similar to what we have been dealing with in Fernie. The biggest concern was surface hoar that was buried almost 80cms down. To be honest I was spooked, and as the clouds cleared I could see more of the terrain above the hut; a couple large couloirs and big alpine faces. Too bad, we won’t be touching those I thought to myself…

The first few days were cloudy and partially snowing so we spent our time below the hut, skiing in the trees and smashing every pillow line in sight. This hut is known for its pillows and I can see why Erik Hjorleifson has spent so much time there. The snow quality was incredible. And the snowpack was stable! Our confidence grew as the trip went on and the alpine lines started to seem more obtainable. The temps stayed cold which helped bond the snow pack and when the high pressure broke away the clouds a few of us went up into the alpine above the hut.

We skied everything. Looking out the windows from the hut our tracks were like art on the mountains. Our skis were our brushes and we painted it all. I’ve never had so many consistently good turns in a row. We skied (with a few exceptions) from 9 until 5 everyday for 6 days. There was only one day that we went in for a warm lunch, every other day we ate frozen sandwiches on the tops of the peaks.

The caretaker of the hut skied with us almost everyday, and he told us the lines we were skiing didn’t get skied very much. It had been a few years even, that he had been onto of Capola Peak which was the largest peak in the Esplanades Range. A few of us stood on that peak four times on those clear days. We really made the most of our time there. 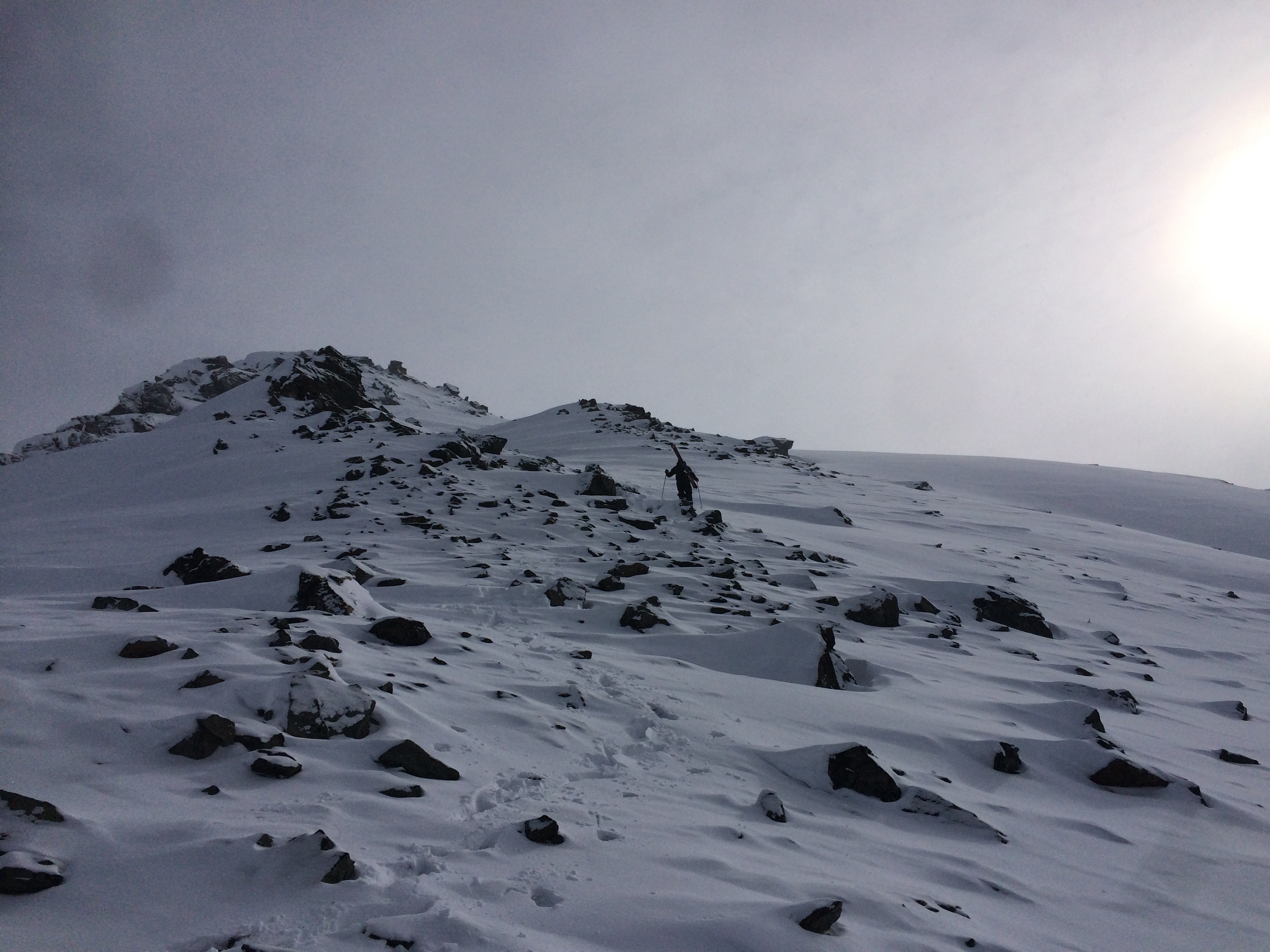 At night we laughed and told stories around the massive dinner table. There was a lot of laughter. This was a hard core group of skiers, and man could they party as well. The caretaker agreed that for a group that did so much drinking, we sure backed it up with our skiing.

The last day came too quickly. My body was tired but the skiing was so good I could have skied another few days for sure. The last run of the trip ended up being some of my deepest turns so in a way I was satisfied, even though there will never be enough powder skiing in my life. I will always want more.