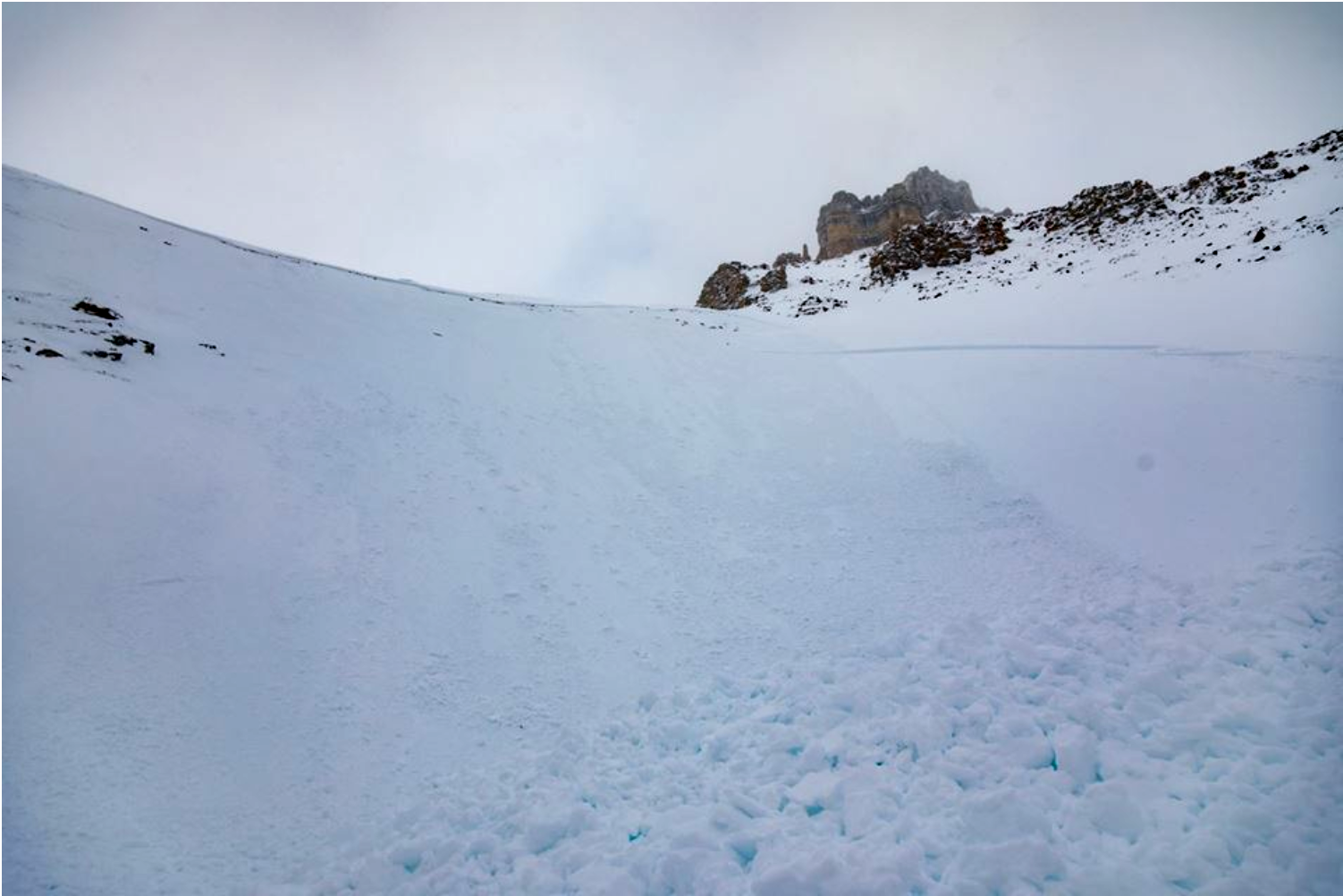 The following trip report is by Tim Banfield who originally posted it on the Backcountry YYC Facebook page. We are sharing it because there are valuable points to take away. One skier was buried four metres deep for over 10 minutes and was saved.

We were involved in an avalanche yesterday skinning up Sentinel Pass. We were still on the way up, our intent was to traverse Mount Temple to scope alpine routes in the area.

We were on the final bit to the top of the pass where the summer hiking trail is, we were spread out by about 100 feet. At the time when the slab released I was in the lead and able to self-arrest, I lost sight of the completely buried partner almost immediately, partner two was partially buried.

I tried to side-slip down the face but was in uphill mode with skins on and ended up slipping and falling the length of the pass on the icy layer that slid and ended up head first at one point, fortunately just road rash from the fall, I was really hoping to not get hurt because I knew I had to go dig and that it was going to be deep.

The slopes combined in a terrain trap, I checked on partner two and she was OK and could self-extract so I immediately went in the most logical direction of where the buried partner was.

My beacon hit 32 metres, then 25 metres, then 18 metres and then partner two yelled out that she had nine metres so I went in that direction.

We narrowed down the search to approximately a four metres reading but it became immediately evident that it was a vertical four metres. We knew the chances of this being a positive outcome were small at best. 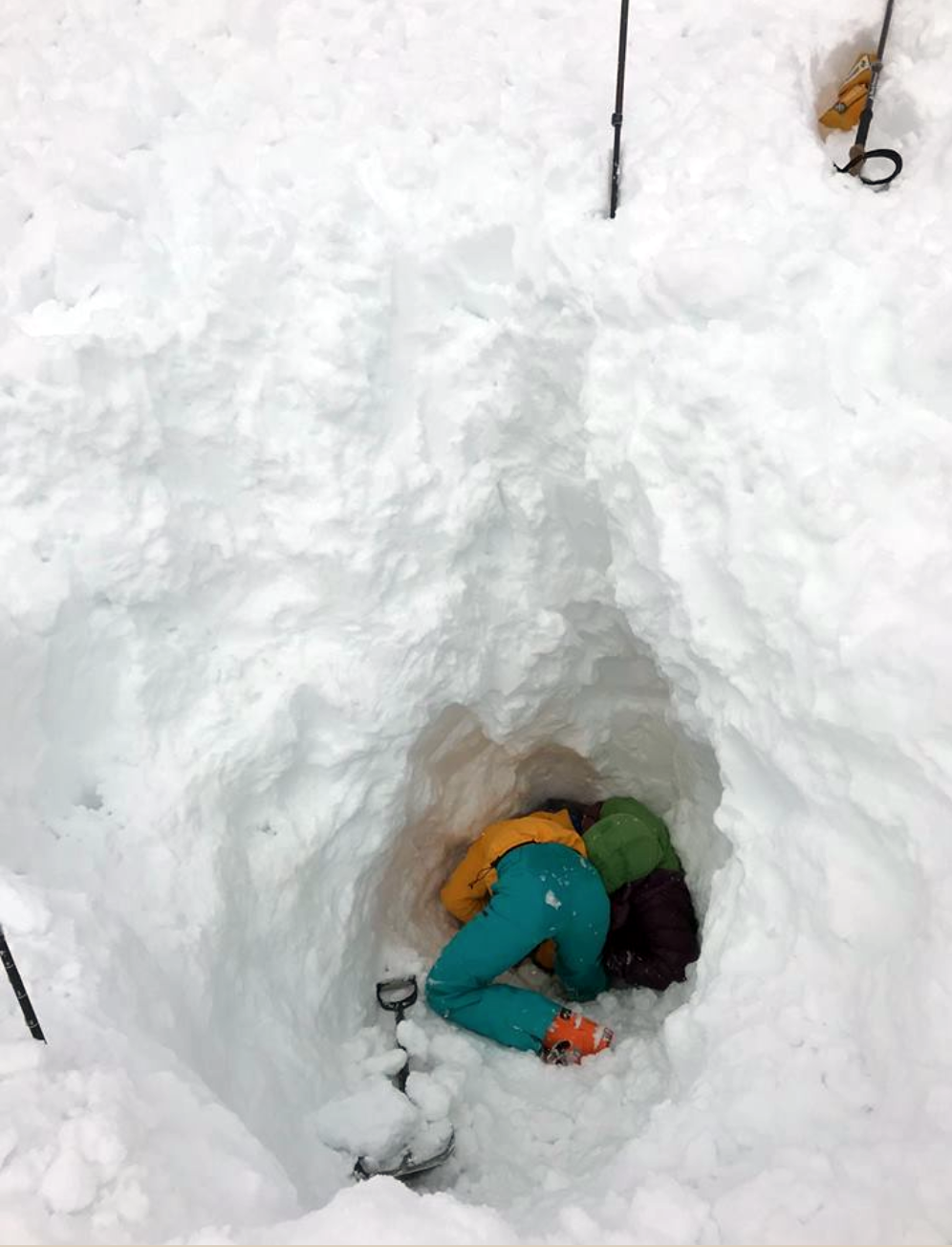 Fortunately, the GoPro vid that circulated the internet several weeks ago of the full burial let us knew we had 11 minutes at least to get to her. Watch here.

Problem one was that our probes were not long enough to probe four metres, mine was 240cm, Maia’s was 320cm, I probed quickly with the 320cm probe but no luck, I assumed it was cause the probe was not long enough.

I dug down between 50 to 100cm and started probing again, I had a strike at the full depth of the probe, another 320cm.

We left the probe in place and dug like mutha fackas. It felt like forever to see the probe be 50cm farther along, then one-metres, then more, we had to also dig out all around so we could continue to dig deeper, that felt like such a pain in the ass when all I wanted to do was dig straight down.

Finally, we hit the bottom of the probe, it was her pack, I was able to figure out from a buckle which way was up, found her head and begun to hear noises, we knew we had a chance. 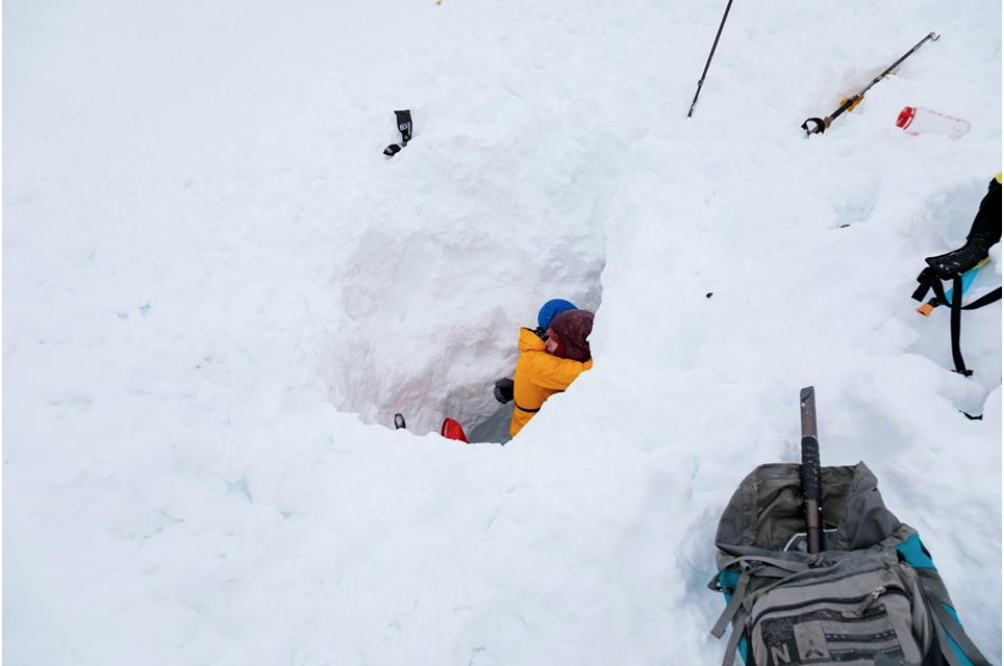 Coming out of the hole Photo Tim Banfield

I found her mouth, cleared out the snow but literally all we had was a small hole to her face, now the real work began. We think it took us approx 10 to 15 minutes to get here.

The buried skier could talk and thought she was “OK” but of course we didn’t believe her.

Our next priority was keeping her warm as we had been skinning uphill in our thinnest of base lawyers, I was able to get a toque on her and then we dug as quickly as possible to remove her pack.

1. Because I wanted to get a coat on her.
2. Because the in-reach was in the pack.

After we got the pack off next priorities were keeping her warm and hitting the SOS. I had a synthetic puffy and everyone else had down so I put my coat on her knowing it would get wet and we didn’t want to lose insulation abilities.

We were getting questions from In-Reach people that didn’t give us reason to think they knew what was happening, we then immediately notified someone we trusted so that we could concentrate on digging vs answering questions like “What’s your name?” And all I thought was “Who cares, just send the chopper.”

Buried skier was still in her skis which made getting her out very time consuming. Her head was approximately four metres deep and she was on an approximate 45-degree angle heading down so her feet were closer to five meters down with the skis attached.

After we got her upper body free we knew it was a real possibility that it was going to be OK as long as hypothermia didn’t set in.

Our number-one priority following a pat-down looking for any blood or injuries was keeping her warm, we had all three puffies on her and some hot tea.

I think it was two-plus hours before we fully had her free, we got our avalanche gear back together in case there was another slide while we waited, my beacon was laying in the snow as I had to take it out to put it on the ground during the initial phase of the digging to ascertain we were getting closer where I was blindly digging the hole, 3.8 metres to 3.6 metres, we must be going in the right direction.

Parks flew in and dropped off Steve H. and Tim H., we collected our gear and they flew us out. 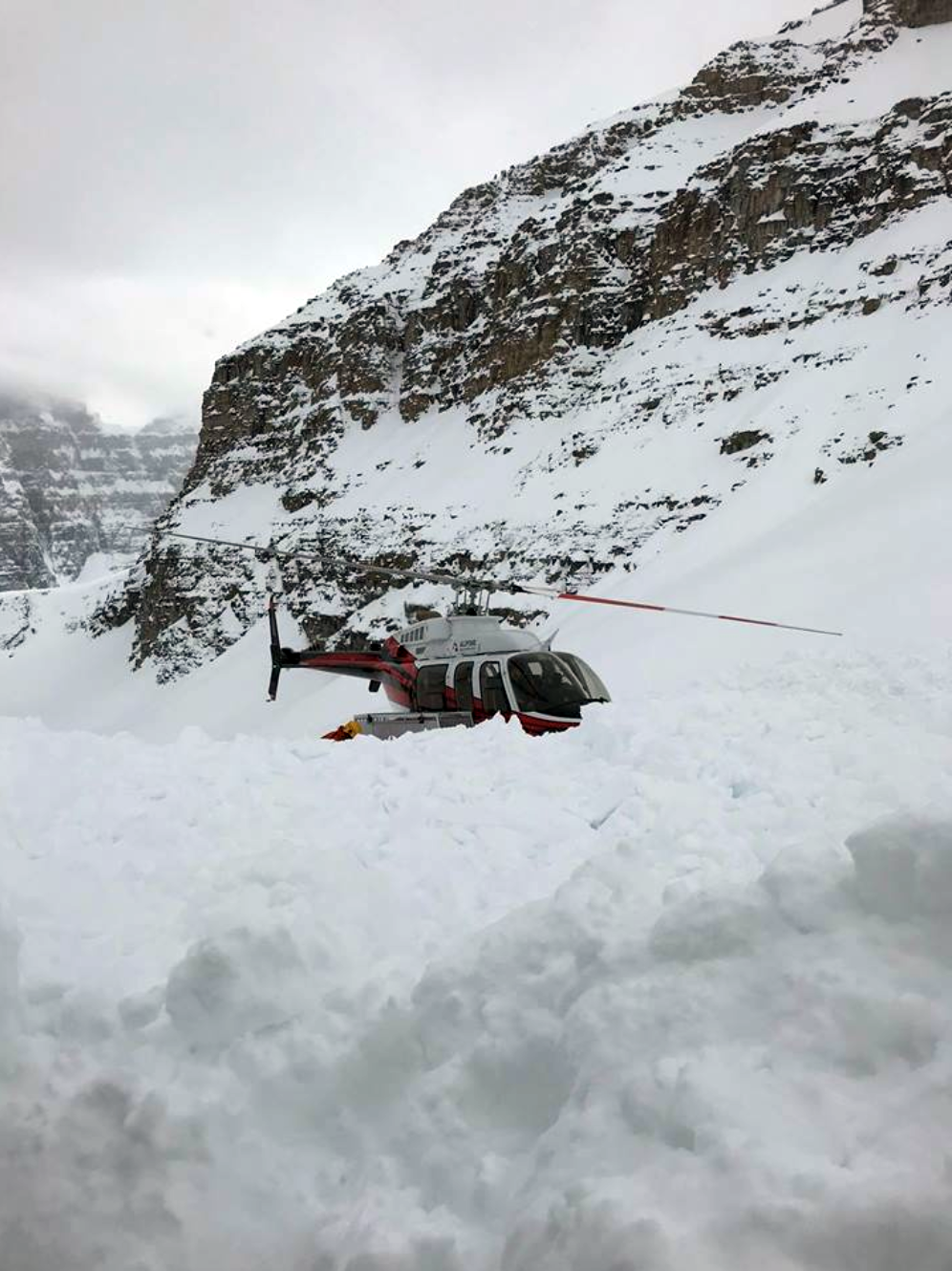 In Hindsight
Don’t fall down the slope after you manage to self-arrest, I feel I was lucky as an injury here would have made it nearly impossible to get buried skier out.

Have an idea of what you might do if the burial is deeper then your probe, I did what felt logical and it worked but I had never considered it before.

Screw saving the weight with a short carbon probe and a small shovel, I knew this was a risk, I won’t do it anymore.

Some people might armchair quarterback our route selection. The day was partly cloudy most of the day, we had sun about an hour before we hit the slope, we switch-backed up to avoid a terrain trap but the way the two slopes released it created the terrain trap in a different location then I thought it would happen. I would likely skin up this terrain again today without much question, it was very unexpected. The only thing I would question was the solar aspect but it did not seem glaringly obvious that it was too sunny to continue as the slope itself was shaded most of the time.

Spacing out more on the ascent would likely have not made a difference here as it felt like everything slid, we had intentionally left 100 feet-plus between us and that is what probably led to the full burial in this case.

As everyone always says a big thanks to Park’s Safety, we were in the mix already but they knowingly came into a situation putting themselves in harm’s way with overhead hazard remaining to rescue our asses.

This accident appeared in Global News here. You can follow Banfield, a Calgary real estate agent, on Instagram. 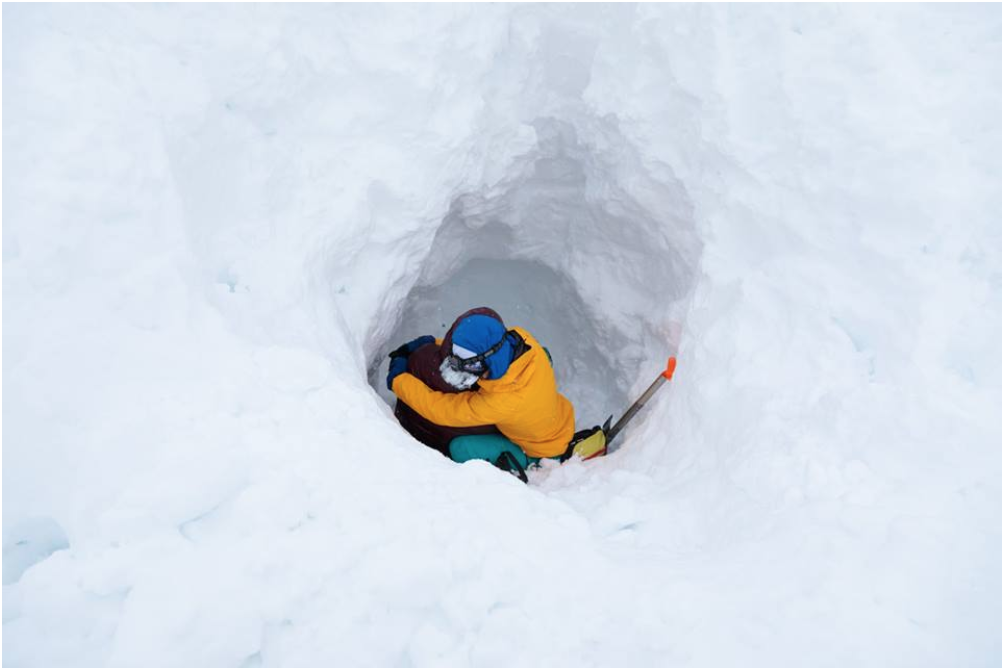 Staying warm after the avalanche and rescue Photo Tim Banfield