Now that we are into the summer, our ability to forecast El Nino/La Nina is substantially improved.

There is, in fact, a “spring forecast barrier” for this phenomenon, with very little skill during the late winter and spring, but greatly increasing skill from June forward in predicting the character of the next powder season.

El Nino and its opposite sibling, La Nina, have a substantial impact on the nature of our powder skiing, with El Nino “weighting the dice” for warmer conditions with less snow.

As you can see in the next figure, there were below-normal temperatures last fall (La Nina), which switched to warmer than normal conditions during the spring leaving us in marginal El Nino conditions.

The latest NOAA Climate Prediction Center forecast for this winter (see below) is for equal chances of El Nino and Neutral conditions. 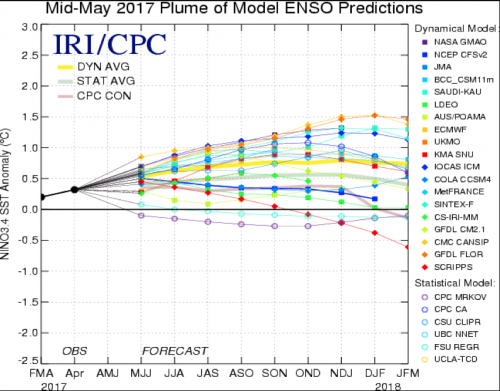 And the recent ensemble forecasts of the NOAA CFSv2 seasonal ocean/atmosphere model projects that conditions will cool towards Neutral conditions this fall. 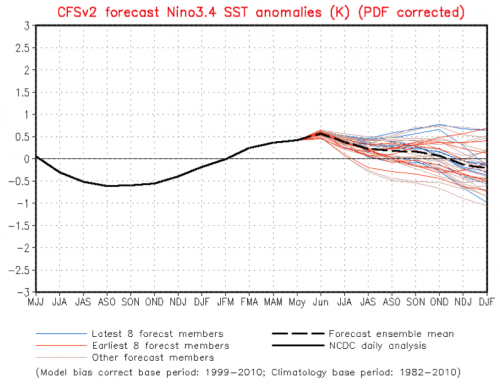 A collection of many forecast center projects, using a variety of models, predicts very modest warming on average. 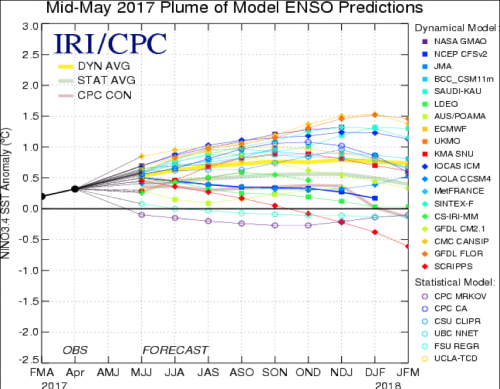 So what is the bottom line? We are unlikely to have La Nina next year. Similarly a strong El Nino is not in the cards. A weak El Nino or warm Neutral conditions is most likely.

For British Columbia mountains, this suggests we might expect a normal snowpack next winter, but not as bountiful as the past season. But keep in mind, the El Nino/La Nina connection only explains about a third of the year to year variability in our weather.