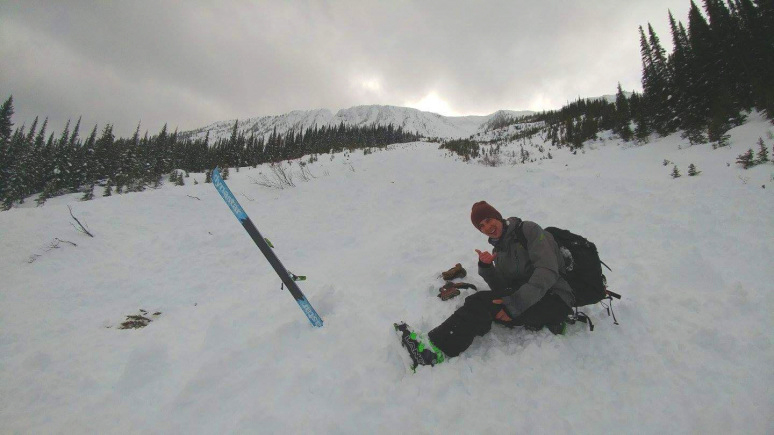 For the past few days I have been looking through new eyes. The air smells fresher and tea tastes better. When I close my eyes though I relive horror that most big mountain skiers can only imagine.

It was the day of the full moon March 12, 2017. Pete and I just got off the beaten track that was a staircase of a boot pack leading out of bounds from Kicking Horse Mountain Resort. From the top of T2 we could see our objective but ahead of us was a complex ridge walk to the next peak. The snow on the ridge was deep and there were cornice’s on either side. Once we finally summited T3 we had a good look down the face. From the top looking left there were some small chutes and pillows that extended into a bowl that ran down into the slide path. Looking fall line was the main chute about 300 metres long. It had a spine feature on the right that ended as the chute became tighter about half way down.

I really want to ski the spine! You should probably ski the safer line…

We dug a pit which didn’t produce any serious results. We had discussed skiing the lower shoulder to our right but the pit gave us confidence. We decided if anything was going to go it would be a small storm slab. We chose to ski from the top, down the main spine. I ski cut, penetrating fifteen centimetres onto a soft base. I looked back at Pete and smiled. It felt solid. I told him I would meet him at the bottom of the chute, opposite the beginning of the slide path. From there we would regroup and have a 1500 metre run down to the end of the runout.

This is going to be sick. 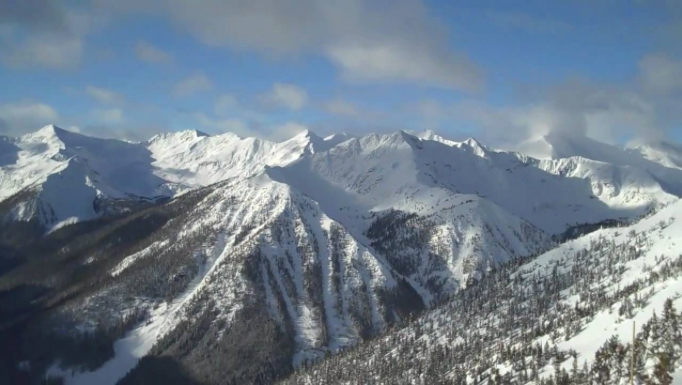 I dropped into the middle of the chute, skiing towards the spine on my right. I got on top of the spine and I realized it was more of a hanging snowfield and there was a lot more snow then in the chute.

Before I could even finish my thought process the entire slope ripped out. Deep. There was so much snow moving. I could see it going over the edge below me. I was already overcome but I knew the chute flushed out the bottom so I fought as hard as I could to get off the spine. I was forced to throw my weight forward and go headfirst into the chute to avoid what turned out to be a 150 metre slope that ripped to ground during the slide. I was fully submerged as I went through the chute. Light followed the darkness as I flushed out the bottom and I felt myself being pushed down under the snow by an unimaginable force. The darkness surrounded me again.

I accepted the fact that I was going to be buried. I braced for it as the motion seemed to end. The snow was crushing me. Life slowed down. Then all of a sudden I was moving again. Fast. Tossing and rolling, I could see light. I choked and coughed, gasping for air. I felt like I went over a cliff then it slowed down again. I had lost all my gear at this point and I was able to move snow from my face and stick my hand up hoping it would not be covered. Again, the violence continued. I felt the power of the mountain and the energy within the snow.

You are not dying today.

I fought. Flailing my arms, trying to swim. It would not end. After a while, I could fight no more. I was exhausted. I couldn’t move my arms. I felt forced to give up. I was still moving with snow all around me. Slower now. I finally felt calm as I entered a very euphoric state. Then nothing.

I came too sitting upright at the bottom of the slide path. Uncovered. I could not believe how long that had lasted, how far I had traveled. Shortly there after Pete found me. We embraced each other in complete awe. It was so quiet, so peaceful. We sat there for a moment together, observing the clouds moving through the trees. It was beauty like I had never seen before.