What was sown in November we now reap in March.

March is statistically the deadliest month for avalanche fatalities. I don’t know why for sure, but I suspect it likely relates to a variety of factors including things like the evolution of snowpack properties, the change from colder, drier weather to warmer and wetter conditions, and of course, human factors. It’s so much easier to believe risk is lower in sunnier, warmer spring-like times than on cold, snowy more wintery days. I always worry a bit in March, but when we have a snowpack like this year’s, March really gives me the willies. 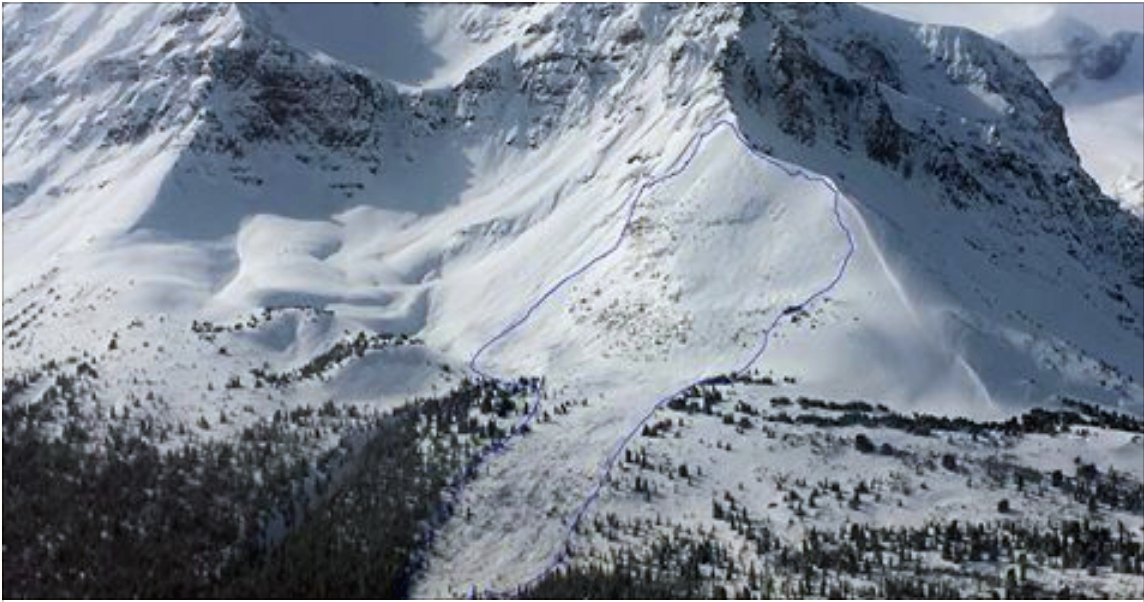 The stage for what’s happening now was set last fall during November and early December. We had a warm, wet fall and freezing levels didn’t creep down until early November. Then, around the middle of the month, the warm weather returned. The snow on the ground became wet during a very warm storm that brought rain to mountain-tops in many areas. That storm ended with cooling and the wet snow was covered by a bit of cold, dry new snow before it had a chance to freeze.

These were the building blocks for what is now called the “November persistent weak layer.” As the winter progressed, colder-than-normal temperatures and below-normal snowfalls eventually transformed that wet November snow into a weak, sugary layer of facets and depth hoar crystals. This persistent weak layer (PWL) is typical of its kind and has remained notably weak and of concern throughout the winter in many regions of BC and Alberta.

While early season facets and depth hoar are normal in the cold, dry climate of the Rocky Mountains, this season the November PWL is worse than usual there. It has also formed in the Columbia and Coast Mountains, places where this kind of layer is less common. Over the winter the snowpack has built up over this weak layer, creating a fundamentally unstable structure.

It’s common for PWLs to remain relatively inactive for long periods of time as the overlying snowpack develops. During these dormant periods, the weak layer adjusts to the increased burden of new snow and avalanches on the layer are few or even non-existent. But eventually a critical state, called “conditional stability” is reached. The snowpack hangs in balance and at this stage, any additional load or new stress tips the balance and avalanches will occur.

Conditional stability in the November PWL was reached in the early weeks of March. The warm, wet and windy conditions that hit mid-month have tipped the balance. Where the layer is very weak (as in the Rockies) we’re seeing a widespread and historic avalanche cycle. In BC’s interior and some coastal ranges the action is not as widespread but regular, seemingly random, very large avalanches are surprising people every day or two. 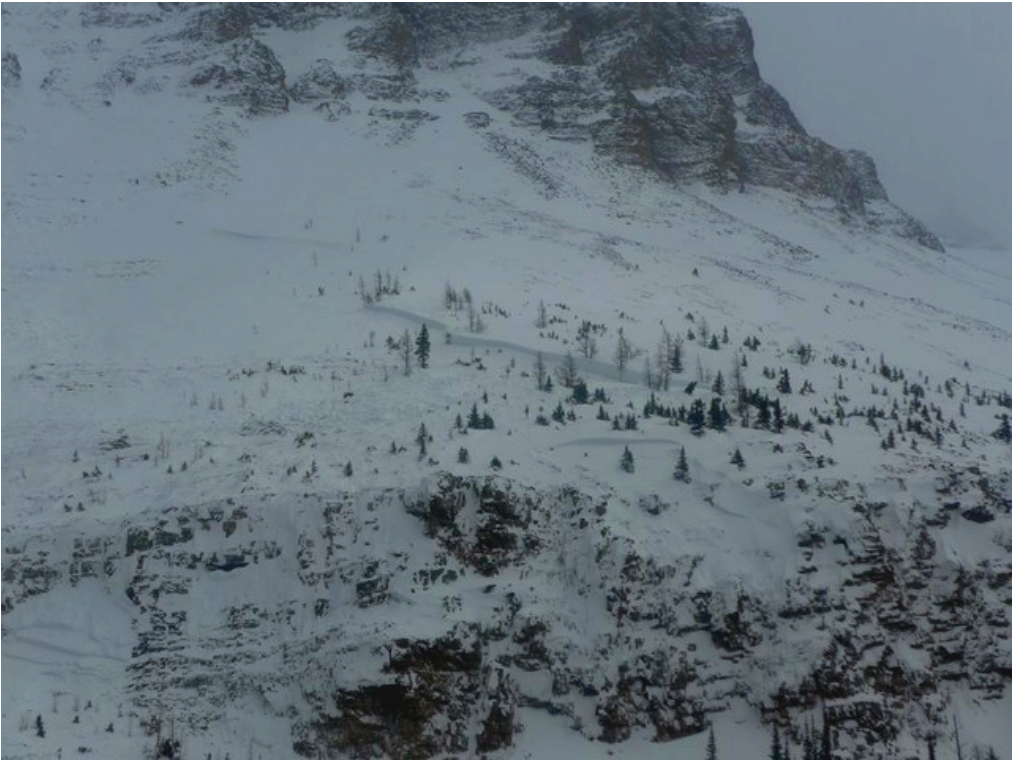 Managing the risk associated with the cycle currently underway in the Alberta Rockies is pretty straightforward—simply avoid avalanche terrain completely until things change significantly. This includes staying out of valley-bottom runout zones. In fact I’d suggest staying at least a couple hundred metres away from the edge of avalanche paths, even in mature timber. Remember, this is an historic cycle. People who have worked there for many years are saying they’ve never seen anything like it. Avalanches are running into and destroying trees that have been standing for decades. If you don’t have the training to recognize avalanche terrain then this is a time to stay out of the backcountry completely; recreating in places where hazard is managed by professionals is strongly advised.

Deep Persistent Slab Avalanche in the Rocky Mountains last week. Image courtesy Banff National Park/Grant Statham. This avalanche likely started as a storm slab above the cloud in the photo. Note the numerous step-down fracture lines throughout the avalanche path many of which go very deep into the snowpack.

Although we’re dealing with same PWL in many parts of BC, including the Columbia Mountains and at least some parts of the Coast Mountains, managing the situation is a bit more challenging. Here, because the layer is buried more deeply and has a stronger structure above it to support additional loading, we’re not seeing a widespread avalanche cycle. But, the PWL is still there and producing avalanches when the terrain and conditions are right.

In much of BC, we’re in, or on the verge, of what’s called a low-probability/high consequence (LP/HC) cycle. This is when avalanches occur intermittently (low probability) yet, when triggered are very large and destructive (high consequence). Because of the depth and age of the persistent weak layer and its variability over terrain, standard tests and observations are ineffective. This and the intermittent nature of events makes LP/HC scenarios far more difficult to manage than other types of avalanche problems or cycles.

But if you look closely and watch the big picture, like avalanche forecasters do, there’s a pattern. LP/HC cycles typically show up in late winter or early spring. And often the PWL causing the problem wakes up and goes back to sleep with the weather. Even seemingly minor changes in the weather can sensitize the weak layer and make it more susceptible to triggering.

Managing this problem requires discipline. If you’ve been charging hard this winter, now’s the time for an attitude adjustment. This means staying on smaller and lower angled terrain, avoiding exposure to overhead slopes and cornices, keeping clear of terrain traps, and using far more conservative travel techniques even on valley bottom trails. Anything less means you must accept a much higher level of risk.

In my experience, this kind of PWL will go dormant and then come back to life again, perhaps several times in the coming weeks. I wouldn’t be surprised if it plagues us until the snow melts. In seasons like this, I’m very cautious each and every time there’s a weather change. Anything that adds load, might cause cornice failure, or could generate surface avalanches signals a time to step well back and wait to see if it’s going to be the factor that starts the next round of activity. So during and for several days after storms, even not so big ones—I pull back. When it looks like the sun might come out—I pull back. When the wind blows, temperatures rise or fall suddenly, or it rains—I pull back.

On top of that, in these conditions I pull back sooner and wait longer to go back into more committing terrain than I would in other kinds of avalanche cycles. And I also pull back much farther. As we have seen in the Rockies over the past few days, persistent deep slab avalanches often perform well beyond expected parameters. Historic and greater runout widths and lengths are not out of the question and should be anticipated.

It’s also important to note that during an LP/HC cycle, avalanches are often not clustered in any one place at any one time. They are generally sporadic and spread out over large regions. To see the pattern and plan appropriately it’s necessary to look beyond your local area. When you’re checking the forecast, keep an eye on your whole region and even those adjacent.

In times like these, it’s a good idea to find pleasure and satisfaction from something other than the adrenaline rush of riding steep and deep. Enjoy the views, work on technique in simple terrain, hang with your friends and family in front of the fire…