The snowpack has bite at the moment, real bite.

It’s become apparent the combination of hard bed surface, cold layer of faceted snow, and a slab of denser storm snow is producing surprises. Wide propagations, remote triggers, experienced people getting caught out, fatalities. Of course the real snowpack has far more additional nuance. Some report facets over a crust. At higher elevations there’s no crust, just a firm old surface. I’ve heard reports of thin surface hoar a few cm above the crust, or another layer of facets, or even a crispy layer of firnspiegel. In some places there’s no slab, in others it’s highly wind-pressed. The variability isn’t too surprising. There’s been wide variations in regional and local snow amounts, convective squalls, localized winds and short-lived but intense sunny breaks. 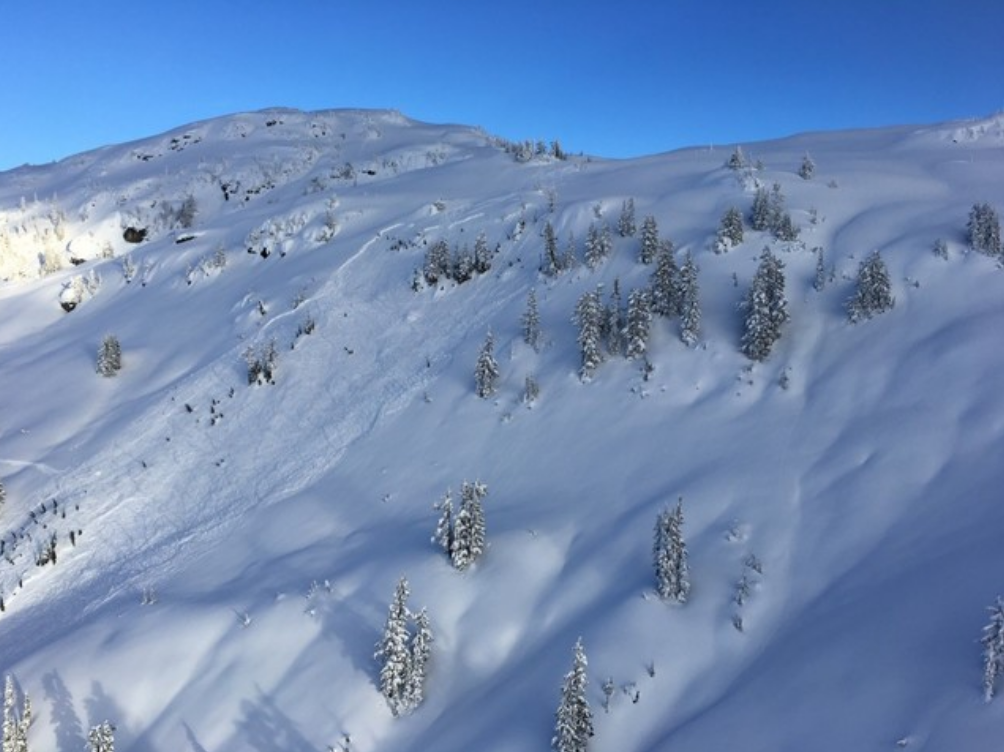 That’s the battle raging on at the surface. There’s a more insidious plot brewing in the deep. On Monday, there was a report of a size 4 avalanche from the South Columbias, which released on a deep facet layer, filled the creek and travelled 100m up the other side. Surprising, yes. But it won’t be the last very large avalanche of the season.

Make no bones about it, this is a tricky period. The combination of storm snow near the surface, and a deeper problem with the potential for sporadic large releases is a difficult scenario to manage. Through discussions with several of the forecasters at Avalanche Canada, I’ve collected a series of general notes relevant to the prevailing conditions. Lower down I offer some advice, but I’ve tried not to be too prescriptive. Instead, I hope to stimulate discussion on how to manage mountain conditions during a tricky period like this.

• We’re operating in a period where snow conditions are highly enjoyable, and skiers and sledders alike have excellent access to a wide array of terrain.
• In most parts of the Coast and Columbia mountains, the snowpack has been very forgiving for the majority of the season so far. This has changed.
• Slab properties change very quickly in March. Particularly sensitive is new snow that is first exposed to solar radiation or warming. There’s lots of new snow out there, and more in the forecast.
• March sun packs a punch.
• Variable snowpack conditions require an extra degree of caution. More than usual we need to recognize point observations may not paint an accurate picture of slope stability.
• Many experienced professionals warned the early season facets would come back to haunt us later in the season. More than usual we need to accommodate the potential for a large, full path avalanches.

If you’re heading into the mountains:

• This is a time to err on the side of caution. Have fun on genuinely small slopes, in the trees and in the meadows. Choose the shallower option if it’s available, or the more supported slope. Don’t get suckered into committing terrain, particularly if the runout zone looks ugly.
• Keep those basal facets in mind. We’re moving towards the latter part of the season where we’ll expect to see these waking up. Of course, shallow snowpack areas are the most likely candidates. But let’s not discount potentially facetted areas within otherwise high snow areas. Steep rocky slopes. Moraine features. Reloaded bed surfaces. Reflect the Selkirks size 4 reported a crown of 3 m—not a super-shallow snowpack. Avoidance is key here. Some of the terrain people have been used to riding this season would be now best avoided to maintain reasonable levels of risk.
• Use the power of group decisions. Giving everyone a voice helps groups to make better, safer decisions.
• Speak up if you’re uncomfortable, or you think there’s a better option that might just require a little more effort.

More and more I talk to avid backcountry travelers who are full of knowledge, have great training and really care about staying safe in avalanche terrain. While the recent tragedies have hit hard, there are fewer fatalities this season compared to recent averages. It’s time to up our game through March and for the rest of the season to keep the trend this way. At Avalanche Canada, we want you to go out and have the best day possible, but we want you to come home safe at the end of it.