Our backcountry conditions have just become a lot more complex with the recent snowfall. This is often the case when we move from a period of cold, clear weather to a stormy pattern. Large, weaker snow crystals (feathery surface hoar and/or sugary facets) form on and near the snow surface during the cold, clear periods. When these crystals get buried by sufficient snow, they form a weak layer which leads to dangerous avalanche conditions. 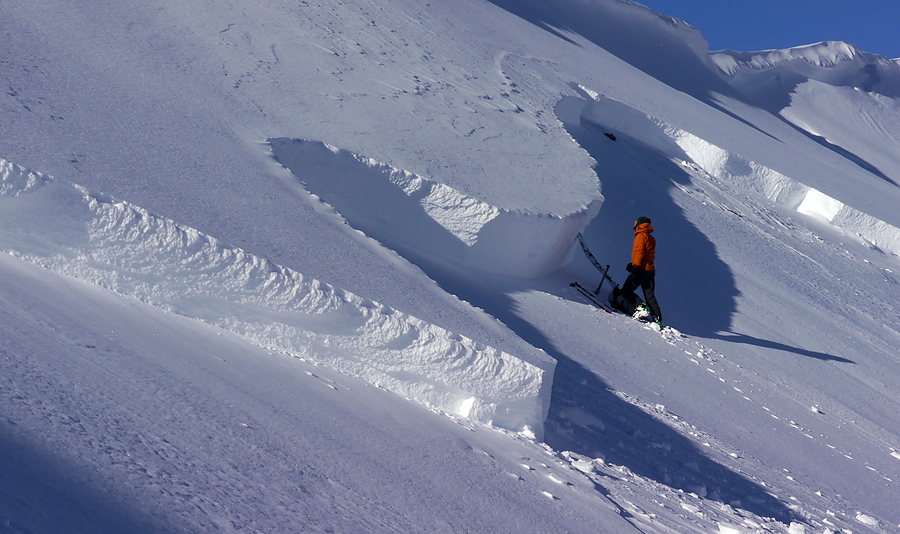 To help make sure we’re all on the same page, I’d like to introduce two terms I think you’re going to hear about (or read in the forecasts) over the next couple of weeks.

The second term is Incremental Loading. This refers to when we get light to moderate amounts of new snow over a series of storms that slowly and steadily builds up that solid upper slab layer of snow, adding weight, or load, to the weak layer below. In this scenario it can take longer for conditions to build up to a critical point where slab avalanches become likely. Predicting exactly when that point has been reached can be tricky. I’ve got to say, sometimes it’s easier when the storms come through in one big punch—in this scenario, avalanche danger goes through the roof for a short period, then tends to come down again to a more manageable level. Unfortunately, the current weather pattern looks like it will lead to incremental loading in many areas.

Surface hoar is beautiful when it’s on the surface, but can be deadly once it gets buried by 30 cm+ new snow. Facets are not so obvious (they’re smaller, square-ish crystals), but can also form dangerous weak layers.

Depending on how the weather unfolds, we could be setting ourselves up for some tricky conditions that could coincide with the Christmas/New Year break. There’ll be more on this subject for sure, but in the meantime, keep checking avalanche.ca for the latest conditions updates. Hit the Problems tab on the avalanche forecast and look for whether a persistent slab problem is listed. Look in the Snowpack Summary section in the Details tab for mention of incremental loading. Now, at least, you know what we mean when we throw these words at you.