Snowy Joey O’Brien is counting down the days until the Mount Baldy ski resort re-opens on Dec. 1.

“We have 109 days to pull this beast out of the ditch,” O’Brian said, the resort’s new managing director.

“We’ve gone from basically zero to 100 miles an hour,” added the man nicknamed “Snowy Joey,” who bought his first resort from his father at age 19.

He pulled Ski Martock in Nova Scotia from the edge of bankruptcy and turned it around, just as he later managed to turn around Fortress Mountain in Kananaskis, Alberta.

Now he wants to do the same at Mount Baldy, which has been closed for most of the period since the end of the 2012-13 ski season when its American owners ran into financial problems.

“We’ve gone from zero to seven staff real fast and we’re going to keep going like that,” O’Brien said, introducing Darlene Richard, director of marketing and administration, who recently did marketing for Destination Osoyoos.

As you may have gathered by now, O’Brien loves numbers. And he throws out many more as he tells the Rotarians about his plans for the winter ski resort.

Correct that – in O’Brien’s view, “Mount Baldy happens to be an incredible summer resort that has good skiing in the winter.”

In the ski business, you can no longer make a living running 90 or 120 days a year, he said.

“You have to get nine months utilization,” he added. “In the ski business in North America, the largest expenditure category right now happens to be in summer business.”

Mount Baldy, at nearly 5,700 feet, has one of the highest base elevations around and it boasts the most sunshine and lightest powder of any ski resort in the Okanagan.

So when the valley bottom is socked in by a grey winter inversion, Mount Baldy often enjoys sunshine and blue skies. And there’s no shortage of snow.

O’Brien says one of the immediate priorities is to give the vegetation on the hills a “haircut,” which will allow skiing with a snow base of just 75 centimetres.

But Baldy also enjoys advantages in the summer.

Some summer attractions, such as taking a lift to the top of the mountain, will have to wait until the third year when detachable lifts can replace fixed lifts, he said.

But there will be activities and programs to lure people to Baldy almost year round, except during the slushy spring freeze and thaw.

A snowmaking machine isn’t on the immediate horizon – the cost is in the $2 million range and it involves a network of pipes in the ground.

But there will be one in the new master plan that O’Brien will be working on over the next two years.

“It’s a significant thing, but it adds almost two months to your season,” he said, pointing to resorts elsewhere such as Copper Mountain in Colorado, where there is high demand from athletes wanting to train in late October and November.

“If resorts like Baldy with its tremendous height can drop into the marketplace, it’s a real opportunity for us to bring in the world for early-season training,” he said.

For the first two years, the priorities will be to get the resort back up and running, focus on service delivery and develop a new master plan to shape the resort’s future growth. 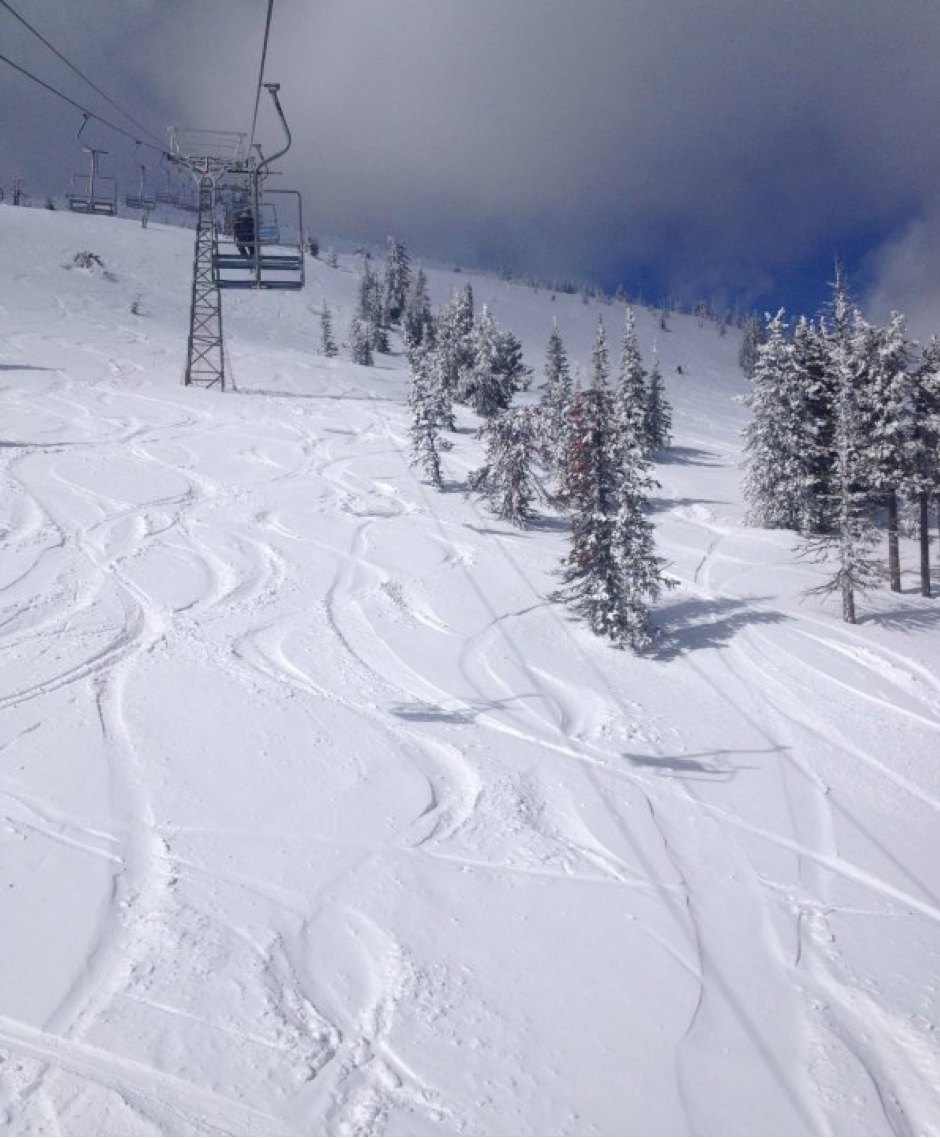 The initial targets this season are modest.

For potential Baldy skiers, here’s where the numbers get most interesting. Passes are selling for prices that are almost unbelievable in the Okanagan. An adult pass is $199, a youth pass is $99, a pass for children aged six and under is just $25 and seniors 65 and over can ski for $19 a season.

The Rotarians, many of whom fall into the latter age group, seemed dumbfounded, some asking if the $19 might be a misprint.

“So to capture them with the pass program, you have to price (correctly),” O’Brien said, adding that some resorts base season pass pricing on five days of skiing.

Seniors, he said, love to ski on weekdays, when it’s harder for others to get to the ski hill.

Another set of numbers O’Brien tosses around is the Net Promoter Score (NPS) index, which is essentially a measure of how likely a customer is to recommend a product or experience to others.

He wants to maintain at least an average of eight on a scale of 10, which would mean lots of referrals. And that’s why the focus is on service delivery.

The master plan, which is approved by the province, was prepared between 2002 and 2005 and is ambitious, but to O’Brien its focus is all wrong.

And that’s why he’ll spend the next two years coming up with a new one.

“It was a real-estate-driven, pedestrian-unfriendly, not very experiential at all master plan,” he said. “It was entirely designed around selling real estate. That’s one of the legacies we have.”

Because the core focus wasn’t the ski experience, when the market crashed in 2008, Baldy, like other similarly focused resorts, was in trouble.

O’Brien, who has been running an environmental consulting business in Canmore AB, admits he had no intention of being in the ski resort business again.

“But as the deal came together and the investor group came together, they convinced me to join them, so here I am,” he said. “I’m not complaining about this. The ski business is a passion of mine.”

The investor group behind the project is headed by Victor Tsao, a Vancouver lawyer, and the investors are Chinese Canadians.

“These guys are great,” said O’Brien.

There’s already been work done to get the lifts back up and running and to safety test them. He plans to do essential fix-ups on the main building, which he euphemistically describes as “having character.”

“We live off numbers, we live off analysis,” said O’Brien. “And we’re going to measure ourselves all the time.”

From the Osoyoos Times