As Western Canada prepares for record high temperatures this week, the Avalanche Canada Special Warning tells recreational backcountry users to be ready for increased avalanche hazard. This warning applies to all Avalanche Canada forecast regions, from the Yukon to the US border and from the Pacific to the Rockies. The warning is in effect through April 1, at which time the forecasters will reassess. 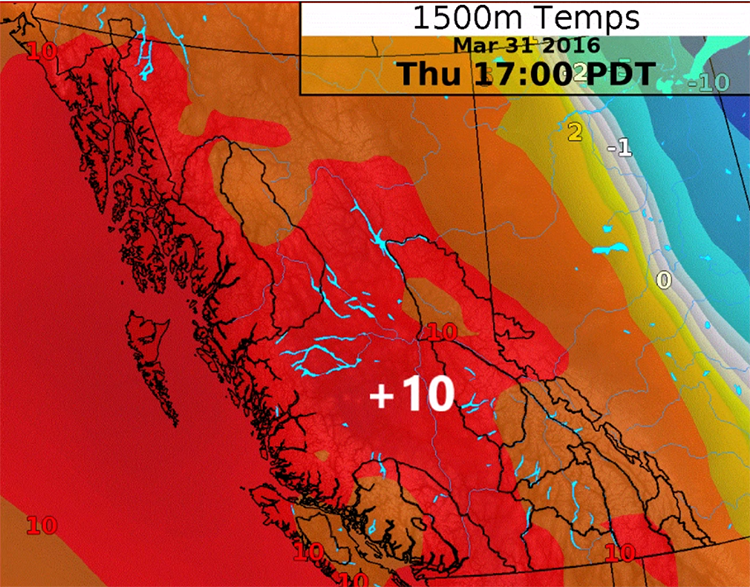 “We’re expecting this weather to have a big impact on the snowpack,” said Warning Service Manager Karl Klassen. “Given that many slopes have yet to see a full-blown warm up we are predicting a widespread and varied array of avalanche problems this week including cornice failures, surface-layer avalanches, and failure on deeper persistent weak layers. While this is not atypical weather for this time of year, clear-sky days often lead to underestimating hazard and failing to manage risk appropriately.”

When the morning sun strikes alpine slopes and cornices, backcountry users should move onto terrain that’s safe from avalanches that start high above and run well into lower elevations. As daytime temperatures rise and the upper layers of the snowpack become moist or wet, recreationists are advised to avoid avalanche terrain completely. “Starting trips in the morning when it’s still cold and before the sun rises, with the goal of being out of avalanche terrain by early afternoon at the latest, is a good risk management strategy,” says Klassen.

Everyone in a backcountry party needs to have an avalanche transceiver, probe and shovel. A two-day Avalanche Skills Training 1 course is the minimum training recommended for travelling in avalanche terrain. For current conditions, check www.avalanche.ca.