“Don’t take storm snow for granted, especially when the sun comes out.”

There have been some near misses in the last couple of days. Actually, quite a lot of near misses. Here are some:


Here are some common threads worth talking about:

1. All these avalanche occurred in areas that have seen good amounts of recent storm snow, averaging at least 50 cm over the past week.
2. Winds have been “subtlety strong”. Sufficient to move snow around, but not honkingly obvious enough to blow you over.
3. The avalanches appear to be concentrated in the south of the province.
4. Many of these avalanches appear to have coincided with higher freezing levels and a short-lived period of sunny weather on Monday.
5. The majority of these incidents seem to have run on a crust buried on or around Feb 10. Some observers have reported surface hoar at this interface, although others have just noted the storm snow itself moves easily.

Looking ahead, I see the possibility for this kind of avalanche cycle to repeat itself. A series of storm pulses will continue to bolster storm snow amounts. Interspersed with these storm pulses, we may well see short-lived sunny breaks. Since February’s sunshine is so much stronger than December’s, whenever the sun comes out it adds a big stress factor to the snowpack.

If you’re skiing, sledding or recreating any other way in the mountains for the next several days, it’s time to dial things back. Your best bet is to select simple terrain and stay away from big, open slopes. The snowpack is primed. Even there isn’t enough snow to support natural avalanches, human can and have been triggering avalanches in many locations. More worryingly still, in a few places we’re seeing deeper layers like the early January surface hoar start to wake up again. If a storm slab avalanche steps down to this layer, a very large and most likely un-survivable avalanche would be the result.

I see this situation continuing through the weekend at least into the beginning of next week. The weekend in particular looks as though it may be when we get some of these sunny breaks.

Much kudos goes out to all the observers who took the time to tell us what you’re seeing in the mountains. Thanks folks, and stay safe out there. 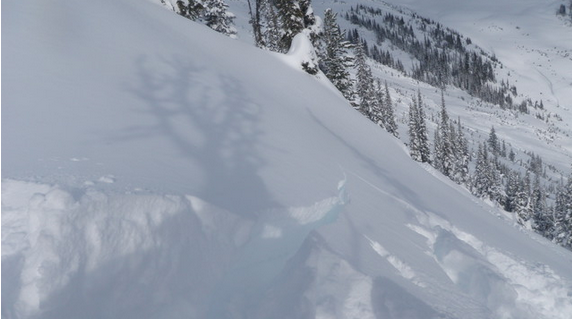 This view of an avalanche in the Teddy Bear Trees in Glacier National Park shows recent storm snow, sunny weather and a soft slab with shooting cracks.