In spite of dire predictions of a warm and dry winter, the snow has been piling up fast in the last couple of weeks. People are getting after it and there’s some great riding to be had. Here’s a few thoughts to start your winter off right.

We get by with a little help from our friends…
There’s been at least two near misses in the few days involving climbers and skiers. The climbing incident serves as a reminder to ice-climbers and mountaineers that you are not immune to avalanches and that even small avalanches can have serious consequences on steep or technical terrain. The skiers triggered a size 3 (big enough to destroy your pickup truck) that was estimated at 500 metres wide, 900 metres long, 50-100 centimetres deep. It looks like it failed on a facet and crust combo near the ground, a classic early-season problem. The whumpf of the failure was felt hundreds of metres away.

In the skiing incident, two people were caught and one was fully buried. 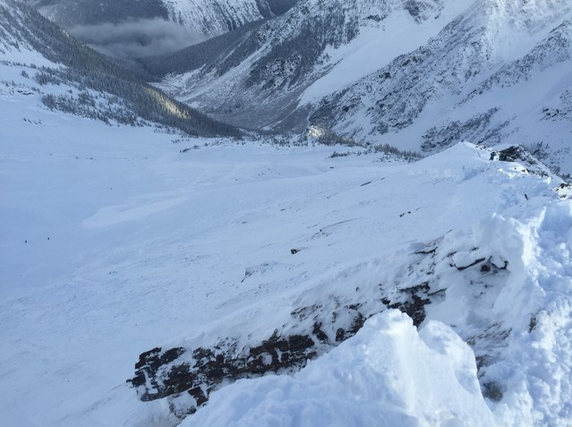 A rescue response was organized by several people who witnessed the accident but a number of others in the area simply kept going on with their day. Now, I’m not sure what the thinking was and maybe there’s good reasons why some folks decided to continue skiing while others mounted a rescue, but here are a few things to consider:

– Statistically, there’s a 15 minute window in which someone fully buried has a reasonable chance of survival. After that, the chance of coming out alive is very low.
– Finding someone using a transceiver and probe is quick if you are trained and practised, but shovelling a hole big enough to extricate someone takes time. The more people available, the faster and more effective the digging will be
– Even if it looks like everyone is ok, it’s a good idea to at least offer help and standby in case it’s not what it seems.
– If you don’t know how to react, ask someone who does what you can do to help. And get yourself some training before you go out again.
– The kind of thing that happened to these guys can happen to anyone. Next time it might be you.

So please: if you see people in trouble, better to go help and find you’re not needed than to ignore the situation and find out later you could have helped avoid a tragedy.

– In the excitement of the first turns of the season it’s easy to forget or shortcut your planning and/or not see the signs around you that warn of potential hazard.
– Limited options can mean many parties, all excited about getting those first turns, are competing for the same line, which puts people above/below each other—a recipe for a multi-person incident if something happens.
– Early season snowpacks are unsettled and poorly bonded compared to later in the season. They change rapidly and are more sensitive to triggering from both natural factors such as temperature changes, solar radiation, windloading, etc. and from human factors such as skiing, boarding, and snowmobiling.
– Trigger points are more exposed in the thin and variable early season snowpack.
– Early season avalanches at any elevation have the potential to be particularly nasty as rocks, slash, deadfall, stumps, open water, gullies, transitions, and other terrain traps are exposed or just below the surface. Even a small avalanche that pulls you over and/or through an obstacle course like this can be deadly serious.
– There’s little information so it’s harder to gauge conditions. In many areas, there’s no avalanche forecast yet because there’s not enough data to produce them. This creates challenges, especially for folks with limited training or experience and who may not have the skills to develop their own local forecast.

Here’s some ways to offset these early-season factors:

– Be more cautious in the early season.

– Start out on mellow terrain to check things out rather than jumping into a bigger, steeper, more complex line first thing.
– Be very cautious if the weather is changing. Rising temperatures, increasing winds, or a sudden burst of sun through the cloud should all trigger a “let’s think about this again” response.
– Even if it’s a place you’re familiar with, treat it more like a new and unknown challenge than an old and trusted friend.
– Be patient and wait for people above and below you to clear the slope before jumping in. Expose only one person at a time to avalanche terrain

Essential gear check.
Everyone knows you need a transceiver, probe and shovel. And lots of folks are carrying balloon packs, but here are a few things to consider before you head out:

– Take all your gear with you every time, even if you figure you’re just going for a stroll and will not be exposing yourself to avalanche terrain.
– Check and maintain your equipment before your first trip:

– Consider a refresher like a Companion Rescue Course offered by qualified provider of Avalanche Canada approved training. Check out www.avalanche.ca/training#overview
– Use your gear correctly in the field:

1. Wear your transceiver according to the manufacturer’s recommendations.
2. Put your shovel and probe inside your pack, not tied to the outside where they can get ripped off in an avalanche.
3. Wear your balloon pack according to the manufacturer’s specifications (e.g. do up the crotch strap!).
4. Have your balloon pack trigger/handle out of storage and accessible at all times, even when climbing up.

Winter is coming…
Starting the early season right gives you a head start on being ready for the rest of the winter. In some areas, public avalanche forecasts are already available. Avalanche Canada has posted some preliminary early season information and our forecasts will start on November 20th.

Be safe and look after each other.