Early in my avalanche career I was in the field one day with a local forecaster. Based on the snowpack tests we performed at the edge of an avalanche path, we agreed that conditions on that slope were borderline, but we didn’t think it would slide. Stepping into my skis, I triggered a large collapse and watched in horror as a three-foot crown shattered the slope inches from our pit.

That event went down in my memory as a powerful lesson on the limitations of snowpack tests.

Backcountry skiers and riders have been taught to dig pits for years, but the elephant in the avalanche education room has always been what role they play in your decision making. All too frequently we use them to judge whether or not a slope is safe to ski—what do you expect when they’re often called “stability tests?” These tests, however, have serious limitations—both in the accuracy of their results and their interpretation—and, when applied incorrectly, can cause more harm than good.

Snowpack tests (a term I prefer) are small-scale data points that should be used to prove or disprove a larger-scale hypothesis. Our forecast could be incorrect due to misjudging the conditions, or sometimes small-scale variations may lead to different stability patterns in the terrain we’re traveling in. Either way, since our terrain choices for the day are (or should be) based on our hazard forecast, every observation we make while touring—including from snowpits—should be used to verify our theory of the snowpack stability.

Instead of using snowpits to make a go/no-go decision, read on to learn a simple process for incorporating snowpack tests into your daily decision making. 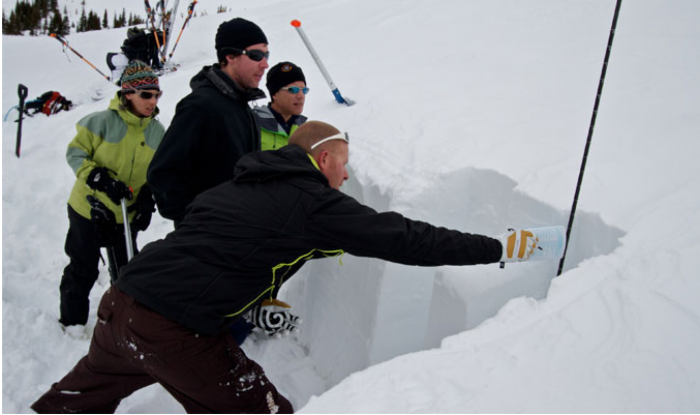 Develop a Forecast
If we don’t start the day with a theory of the snowpack stability, we tend to look for easy answers when it comes time to make a decision. Before heading out, develop a morning forecast utilizing all available data, including the avalanche bulletin, local observations and weather conditions. Even better: document your hazard forecast in a fieldbook.

Make a Plan
Set yourself up for success—start the decision-making process at home. Based on your forecast, what slope angles, aspects, elevations and terrain complexities make sense? Again, documentation is your friend—write your plan in a notebook or on a map.

Dig Some Pits
If you’re going to dig pits, it’s absolutely essential to understand their limitations and relate them to the bigger picture. Since the snowpack varies tremendously from place to place and snowpack tests are imperfect tools, a snowpit alone will never tell you whether or not a slope is safe. But what snowpack tests can do, alongside other key snowpack, weather and avalanche observations, is help to confirm or deny your stability assessment. Since your morning plan utilized your forecast as a starting point, verifying your theory is a crucial step in the decision-making process.

Dig your snowpits with a clear objective and a predicted result. If you forecasted a relatively unreactive, persistent weak layer, your goal would be to ID the layer and perform a snowpack test. You wouldn’t expect your test to yield easy shears or the likelihood for propagation. If you see something unexpected, take a hard look at the next question.

Are Conditions as Forecasted?
This is the million-dollar question, and all of our observations should aim to help provide the answer. Only after answering this question can we proceed to evaluating our terrain choices. If we skip this step and assess the stability of a given slope based on a test or two, we hang our hat on small-scale details without the benefit of the bigger picture.

If snowpack tests and other relevant field observations don’t present any surprises, then we can assume our forecast is valid and proceed with our planned terrain choices. If, on the other hand, if our tests yield something unexpected, we need to assume our understanding of the hazard is incomplete and our forecast may be incorrect. As a result, dial back terrain choices by choosing more conservative options or bailing on a planned objective.

Temptation arises when we expect to get poor results in tests, but don’t. Are conditions more stable than we thought? Perhaps. But we could be digging in the wrong place or human factors have us looking through tinted lenses. Skiers and riders in it for the long haul will choose to stick to their plan rather than ramping up into more aggressive, unplanned terrain. Stepping up the terrain should be a considered process, not one done in the field based on a piece or two of information.

Remember This
Context is just as important to digging a pit as a shovel and snow saw. You need a big-picture forecast to frame small-scale data points. There are days when other field observations are as or more valuable than snowpack tests—the key is to use all available information to confirm or deny your stability forecast. If your observations point to an accurate assessment, then it’s full steam ahead.

Chris Lundy is the co-owner of Sawtooth Mountain Guides in Stanley, Idaho, where he works as an AIARE avalanche instructor and ski guide. He holds an MS in snow studies from Montana State University-Bozeman and was formerly the director of the Sawtooth Avalanche Center.