Latest El Niño Weather Outlook Bodes well for a return to a BIG Winter in most of BC, Powder Canada’s playground!

The last two seasons have seen the creation of three new meteorological terms never before used (except maybe in sci-fi weather movies predicting the end of the world). The ‘Ridiculously Resilient Ridge’ (RRR for short) created the ‘Blob’ which together created the ‘Polar Vortex’, or so the story goes. These weather phenomena have been in play for the past two winter seasons and have been responsible for controlling British Columbia’s, as well as the rest of Western North America’s, unseasonably warm and dry weather. BUT no more! 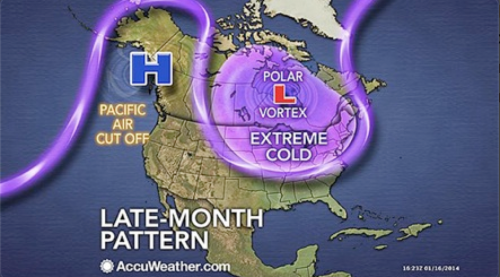 Above: Typical pattern of the Polar Vortex which has kept the province of British Columbia Substantially warmer and drier for the past two winter seasons.

“The Ridiculously Resilient Ridge”, as Daniel Swain* has labeled it, “is a region of unusually persistent and record-high pressure over that same part of the North Pacific. It too shifts and moves and sometimes briefly even disappears. But essentially for the last two winters the ridge has acted like a giant bubble dome over the ocean, deflecting the storm track northward away from the West Coast, and into the Arctic where it picked up a bunch of freezing air to dump ice and snow down North America’s backside [The East Coast]”, writes Eric Simons in his article.

Eric goes on to write; “This is the important point: the NPM, which likely caused the ridge, which certainly caused our drastic two-year precipitation deficit — is gone. El Niño has disrupted it. There is therefore no reason to believe the ridge will re-form, no reason to think the storm track will be deflected, and no reason to think The Blob will persist.” “The climate models used for seasonal weather prediction are pretty emphatic about this”, Bond says. “We don’t expect a big ridge in the Northeastern Pacific this winter”. 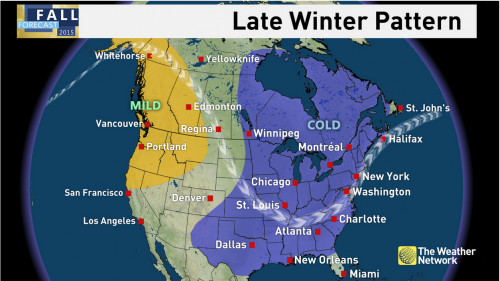 With the predicted strong El Niño, NOAA is forecasting a likelihood of above normal precipitation for BC’s North Coast for the upcoming winter season. Their 3 Month Precipitation Outlook for December, January and February depicts the classic El Niño split of the Jet Streams with the ‘Tropical Jet’ dipping South toward California and New Mexico and the Northern component, the ‘Polar Jet’ swinging North and through the North Coast of British Columbia.

What about temperatures? “Both fall and winter are predicted to be warmer than normal by 1°C-2°C. Substantially less warm than last winter…” quotes Cliff Mass, a respected Meteorologist from the Northwest in his article. 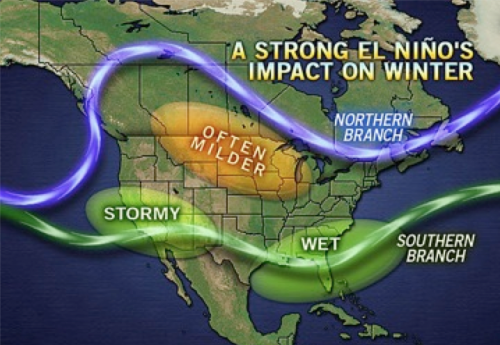 Above: A global depiction of a Strong El Niño with the split Jet Streams.

For BC’s North Coast and Inland Sections, temperatures in the mountains typically decrease by -0.5°C per 100m of elevation gain. Therefore at elevations between 800m and 2400m you can expect an average temperature of between -10°C and -6°C in a normal winter. A slight warming of 1°C to 2°C will only mean your fingertips will be a little less chili while skiing and riding. “It will certainly be much cooler than the past season if all the forecasts are accurate” quotes John Forrest, Northern Escape Heli Skiing’s GM.

“Now I’m no weatherman, thank god, but the RRR dissipated in early Aug which has allowed the North Coast and Terrace to see a return of the monsoons required to call this region a Rain Forest and provide the deep winter snowpack . The Jet Stream is back to a more usual position with the hose pointed directly at us. This fall feels much like a ’normal’ fall as my webbed toes are returning and we haven’t seen the sun in some time. In fact Hurricane Oho is bearing down on the North Coast with a forecasted 100mm+ of rain and Snow-Forecast.com, is forecasting nearly 100 cm’s of snow up high along with continued cooling temperatures,” replies John when asked for his prediction for this winter.

NOAA’s prediction for above average precipitation following the North and
South branches of the Jet Streams with the increased likelihood of drier conditions prevailing between them.

“Bring it on! My forecast is for a BIG Winter! It’s Deeper Up Here!” John laughs and adds.

* Daniel Swain is a PhD candidate in the Department of Environmental Earth System Science at Stanford University. A member of the Climate and Earth System Dynamics Group, Daniel studies the changing character of extreme meteorological events, with a focus on the role of persistent large-scale atmospheric patterns. He is especially interested in processes that connect the Earth’s temperate latitudes to equatorial and polar regions–including atmospheric blocking and atmospheric rivers. He holds a B.S. in Atmospheric Science from the University of California, Davis.