Wow! Some parts of BC sure got hit hard by a couple of walloping storms. In Revelstoke, I had a hard time keeping my driveway clear of snow and I was really glad for the 4X4 high clearance, just to get around town. In the mountains, it’s been an equally wild ride, with some areas seeing a metre of new snow, freezing rain in places, and temperatures that pushed up above zero C well into the alpine.
So where are we at with avalanche conditions and how are things likely to evolve over the next few days?

Let’s break things down into four different zones: High Snow Interior; Moderate Snow Interior; South Coast and Northwest. Obviously, that’s simplifying things a little bit, but it should help to illustrate the main factors affecting the evolution of avalanche danger across BC at this time. Have a look at the picture below: 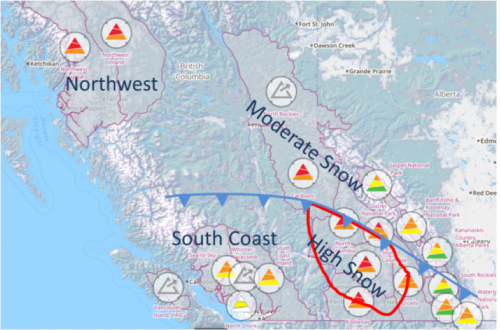 The red outline indicates where the most snow fell in the Interior between 3rd and 6th January. Areas to the south and west of the arctic front, indicated by the blue line with triangles, saw warm alpine temperatures. This warming came at the tail end of the storm and is expected to persist at least until Thursday 8th.

High Snow Interior Zone
In this region, start zones were loaded with up to a metre of new snow before temperatures spiked, and we saw widespread natural avalanche activity up to size 3. Avalanches were initiating at the base of the recent storm snow and reliably stepping down into the prominent weak layer from mid-December, which is buried between 80 and 150 cm in this zone.

Crystals within the snowpack gain strength after a storm by processes of rounding and sintering. These processes need time to occur and are aided by pressure and relatively warm snow without temperature gradients. If you’ve noticed that I’ve used warm temperatures to indicate both a trend towards avalanche activity and stabilization, you’re right, but there’s no reason to get confused. Both processes are valid; it’s all about the timing. Get rapid warming during or shortly after a major dump of new snow and you’ll see avalanche danger increase. Get longer-term warming after an avalanche cycle, and you’ll see bonding and improved snowpack stability.

So we have some good news and some bad news as far as settling the snowpack following this storm is concerned. The good news is we had lots of new snow (creating pressure within the snowpack) and relatively warm temperatures, especially in the upper snowpack. This has helped settle many of the near-surface instabilities out fairly quickly. The factors working against snowpack stabilization are the cold temperatures experienced at the start of the storm and the resulting temperature gradients in the snowpack. These are acting to delay settling out the most critical parts of the snowpack, which are the base of the storm snow and the mid-December crust/surface hoar layer.

Which set of processes will win out: stabilization, or persistence? With time, I’m fairly confident that we’ll see less triggering at the base of the storm snow and on the mid-December weak layer, but for the next few days I’d still reckon we’ll see some sizeable slabs triggered in a number of areas. At Avalanche Canada, we’re going to be scrutinizing avalanche activity and snowpack test results very carefully for signs of how the critical weak layers are evolving. Of course we’ll pass our findings on to you through the avalanche forecasts, which are updated daily. Right now, the data suggest these interfaces are still active and need more time to settle.

While the snow did not generally become as unstable as in the High Snow Interior zone, the snowpack might actually take longer to gain strength compared to where more snow fell. This is because fewer avalanche paths have been cleaned out of snow, and the reduced pressure from less weight of new snow will keep sintering rates lower. Parts of this zone that did not experience the warm temperatures at the end of the storm (especially in parts of the Cariboos and North Rockies) may see stabilization further delayed as the snowpack has remained cold.

The figure below conceptually indicates what I’m trying to explain. Of course there are plenty of local factors like terrain, how prominent the mid-December weak layer was (which varies from valley to valley), the degree of wind slab formation and other factors that keep this a generalized idea at best. While this might help to explain a high level concept, please continue to read the bulletins and scrutinize the Mountain Information Network (the blue pins on the Avalanche Canada map) to get updated info and don’t rely on this graph (not that anyone would do that, right?!). 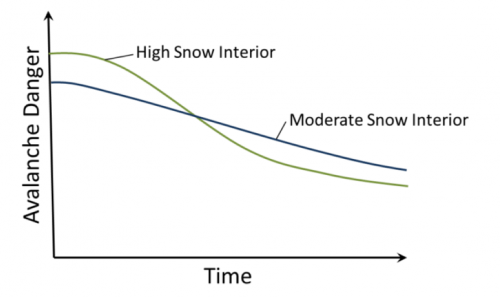 South Coast
Considerable rain (around 20 mm) fell towards the end of the storm at all elevations on the South Coast. This resulted in low density snow being capped with a thick rain crust—a situation that typically doesn’t lend itself to great skiing or riding! Reports indicate that the surface hoar associated with mid-December crust is still present. However, the likelihood of triggering this layer has gone way down on account of the capping crust on the snow surface. Avalanche conditions are greatly improved, but finding fresh snow is probably hard too.
Northwest

Significant snow fell in the Northwest, both in Coastal areas and further inland. Storm slabs have been a problem and cooler temperatures are likely to allow these to persist for a little time at least. In general, the mid-December crust/surface hoar layer was less well developed in this area and has not been reported as a major concern. In general terms, we’re looking at a fairly standard set of storm-related avalanche problems, which will need some time to stabilize, but shouldn’t linger for an unusual amount of time.

Conclusion
Both avalanche danger and riding conditions vary significantly across the province right now. The dramatic storms of early January have had a mixed effect on the snowpack, in part because some areas have seen warm temperatures, while others have remained cool. Moving forward, some areas have already mostly stabilized (the South Coast), while others will continue to have dangerous avalanche conditions that may persist for some time (most likely the Moderate Snowfall Interior, but possibly parts of the High Snowfall Interior zone too). Your best bet for staying up to date is to check the most recent avalanche forecast for your area and look for up-to-date observations in the Mountain Information Network from sources you trust. When you head out, keep your eyes open for observations and start on small, non-committing features.

Stay safe out there, and let us know what you find!