It’s been one of those winters. In terms of snowfall, it’s been feast or famine with juicy (and often warm) storms interrupted by longer, cool and dry periods. This pattern is somewhat ideal for avalanche formation, and December’s weather has set the stage for a scenario that has us concerned.

It all started with a moist pacific frontal system that brought heavy snowfall to most regions at the beginning of December. At the tail end of the system, precipitation fell as rain in many areas, and subsequent re-freezing created a hard crust that is widespread at treeline and below. In many areas, this crust also exists at alpine elevations. Over the next 4 or 5 days, a cool dry ridge of high pressure dominated the province. This period was perfect for facet and surface hoar development on top of the crust. Facets are those sugary grains that are difficult to make a snowball out of, and surface hoar is those feathery crystals that shine like diamonds when the sun hits them. On December 17th these crystals were buried by a light snowfall, and in the following week snow from a series of storms created a cohesive slab that now overlies this weak and complex layer. In short, this weather was perfect for slab avalanche formation. It’s a really crude analogy, but we basically have a thick white mattress over marbles on top of a concrete floor. And, with that hard crust and sugary/feathery weak layer this problem will persist for some time.

Throughout last weekend, the recreational and professional avalanche communities reported natural and easily human-triggered slab avalanches to size 3 (that’s big enough to destroy a pickup truck), and the mid-December interface was the suspected culprit in most of these occurrences. These occurrences provide obvious feedback that there was a real problem, promoting a cautious approach to the mountains.

Since then, the problem has become less obvious as natural avalanche activity and stormy weather have both tapered-off. That said, those reactive weak crystals are still there, buried by a cohesive slab that has the potential for wide propagations and remote triggering. Avalanche professionals are currently tip-toeing through the mountains avoiding aggressive terrain because they are aware of the potential for large and destructive human triggered avalanches. However, a few very close calls (see photo below) in the recreational avalanche community have us concerned as we head into another period of relatively dry weather. 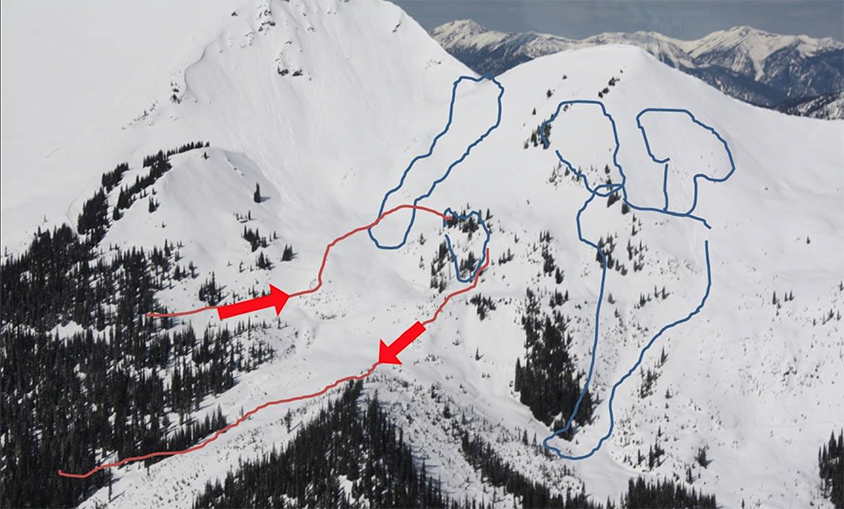 The red line marks the path of a ski touring party that remotely triggered large avalanches (marked in blue) in the South Columbia region a few days ago.

This photo was taken in the South Columbia region a few days ago. The red line marks the path of a ski touring party. The blue lines outline large avalanches that were triggered simultaneously by the party from up to 100m away.

In the paragraphs above, I’ve the described the current avalanche problem. The avalanche problem is an external hazard; but inside us all, we have internal hazards that also have to be managed. Internal hazards facing many folks this holiday season may be: the motivation to shred on new gear, the motivation to hit terrain hard because of limited time off, or the lust for powder when conditions have been somewhat marginal up to this point in the season. With improved weather in the forecast, getting into aggressive terrain becomes easier especially when we’re fueled by these internal hazards.

This may all be getting a little techy, but my advice to managing the current scenario is pretty simple: Stick to low consequence, low-angle terrain. Imagine what would happen to you if a large avalanche occurred in the terrain you’re thinking about riding. If you’re not ok with that, don’t go there. Remember to avoid terrain traps, keep away from slopes where there are people above you, and watch your overhead hazard, ensuring your regroups are always in safe zones.

It may also be a good time to be a bit of a snow geek. Dig down and check-out these layers I’m talking about. I’m sure you’ll find the crust in most areas. See how much snow is on the crust, and consider that the slab is going to be way deeper in wind-loaded terrain.

‘Tis the season for shredding, but it’s also the season for friends and family. Let’s remember what’s most important as we chose terrain this holiday season.