La Niña is back!

La Niña conditions are back this winter. La Nina is a mass of cold water that forms out in the central pacific ocean. What does it mean for a powder skier?.. You’re gonna get dumped on in the West of Canada–Allll winter long!

Why is La Niña rad for skiers snowboarders?

La Niña, meaning the little girl, names the appearance of cooler than normal waters in the eastern and central Pacific Ocean. Sometimes called El Viejo, anti-El Niño, or simply “a cold event”, it is the antithesis of El Niño.

La Niña is thought to occur due to increases in the strength of the normal patterns of trade wind circulation. Under normal conditions, these winds move westward, carrying warm surface water to Indonesia and Australia and allowing cooler water to upwell along the South American coast. For reasons not yet fully understood, periodically these trade winds are strengthened, increasing the amount of cooler water toward the coast of South America and reducing water temperatures.

The increased amount of cooler water toward the coast of South America, causes increases in the deep cloud buildup towards southeast Asia, resulting in wetter than normal conditions over Indonesia during the northern hemisphere winter.

The changes in the tropical Pacific are accompanied by large modulations of the jet stream within the middle latitudes, shifting the point at which the stream normally crosses North America. The shifted jet stream contributes to large departures from the normal location and strength of storm paths. The overall changes in the atmosphere result in temperature and precipitation anomalies over North America which can persist for several months. – cold winter in western Canada and northwestern United States. 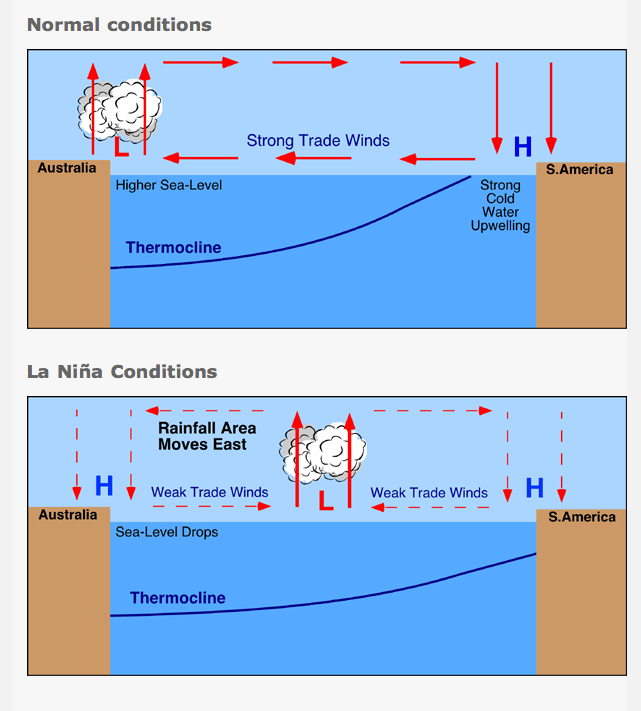