Anybody who has traveled through the mountains in the spring can tell you how much the snow can change throughout a single day. Once the sun starts really shining and the snowpack shifts into a daily melt-freeze cycle, snow surfaces can evolve from an industrial strength crust in the early morning to unconsolidated schmoo by mid-day. These rapid changes translate into avalanche danger fluctuating throughout the day. Understanding the avalanche problems in the spring moves beyond the where (aspect, elevation, and terrain feature) to include the when (time of day relative to warming). 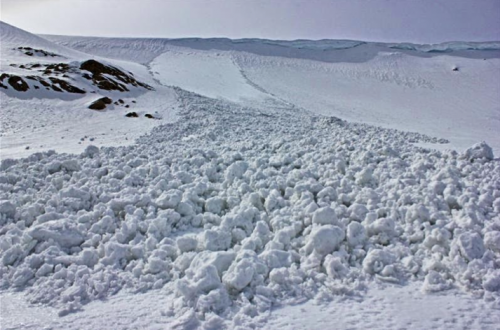 So, how do we communicate the changing avalanche danger? Do we issue danger ratings for times when the snow is most stable, or do we attempt to capture the avalanche danger for the few hours when avalanches are failing predictably during the heat of the day? This is a long-standing point of debate among avalanche forecasters and we felt it was time to explain our approach to spring messaging.

A classic melt-freeze cycle is when snow surfaces have undergone several days of thawing with subsequent nightly re-freezes that leave a thick, supportive crust (usually a minimum of 10 centimetres of hard, icy crust). Assuming there are no over-riding avalanche problems, this crust can “lock” the snowpack in place. During these times posted avalanche danger for the day will be rated for the frozen snowpack (generally Low) but it’s important to remember that this rating will be accurate only until the afternoon schmoo hits and it’s obvious things are falling apart at which time danger is clearly higher.

There may be times when we expect surfaces will not refreeze overnight and the schmoo will stay in place. There may also be times when crust recovery will be minimal and surfaces will transition to schmoo sooner rather than later. In these cases the danger ratings will reflect the snow in its melted state as conditions are expected to deteriorate quickly and elevated danger is expected right from the outset of the day or earlier than if there’s been a solid overnight re-freeze.

To get the most out of the bulletins, resist the urge to rely on danger ratings alone. There’s often messaging which reflects the effects of solar warming in the bulletin headline. As well, have a look at the text under each avalanche problem where you’ll often find great insight into how to manage the changing conditions.

The good news is classic spring instabilities are relatively easy to identify and manage. If you’re putting on sun-glasses, the sun is probably packing a punch. If you’re shedding layers because you’re warm, the snowpack probably feels the same way. If you see snow pinwheeling down steep features, when small loose wet snow avalanches start to occur, or if the snow is so moist you can easily make a snowball, the snow is definitely warming up and it’s time to think about packing it in for the day.

If you’re heading out for some spring shredding, take advantage of the melt-freeze cycles when you can. Early morning travel, while everything is frozen up and locked down is often safest and most efficient. For those folks heading out on spring traverses, plan your day so you cross exposed solar aspects before they heat up, and avoid overhead hazards such as cornices.

In short, spring avalanche danger can sometimes change from Low to High in a matter of hours or even minutes so remember, timing is everything.