In “Heli-Skiing Is the Best Drug I Have Ever Taken,” Huffington Post writer Blake Fleetwood waxes poetic on “floating down on clouds of my own creation” – the result of a day’s heli-skiing with Mike Wiegele.

Says Fleetwood: “After eight runs of sheer delight, I approach my host Mike Wiegele with a smile on my face and say, “This was the best day of my life.””

Fleetwood reveals a new-found addiction for heli-skiing near Blue River, British Columbia: “Maybe it’s the altitude,” he writes, “but heli-skiing is like the best drug I have never taken, and it’s certainly as addictive. I want to go back again and again.” 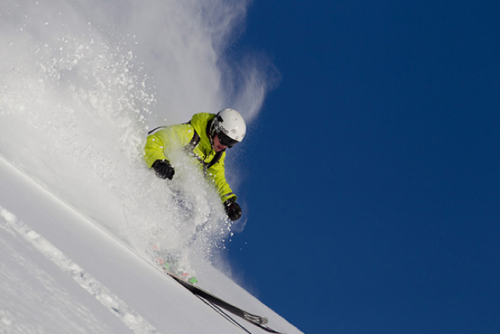 I am floating down on a cloud of my own creation, leaving my mark in symmetrical carved turns on a pristine white landscape of four feet of untracked powder — a dream world, as close to heaven as I am likely to ever get. White all around as far as I can see — mountains, clouds, not a sign of human intervention.

My turns are smooth and soft, as I slowly move up and down, dancing in perfect balance in four feet of untracked light powder snow. White crystals of light snow splash up into my face on every turn.

After eight runs of sheer delight, I approach my host Mike Wiegele with a smile on my face and say, “This was the best day of my life.”

Wiegele, who invented the fat skis that made the sport popular, and possible, for older non-experts, smiles and says, “Someone says that to me at least once a week and makes mine the best job anybody could ever have.”

This happens as his guests step off the helicopters that have taken them high in the snow-covered peaks of British Columbia where they have been skiing.

Maybe it’s the altitude, but heli-skiing is like the best drug I have never taken, and it’s certainly as addictive. I want to go back again and again.

And it’s probably the most dangerous and expensive drug I have ever tried, as well.

It is a pinnacle, life-expanding experience –the ultimate adventure for skiers with a passion for powder.

But this indulgence does not come cheap with one-percenter prices ranging from $1,000 to $1,500 per day.

Nor is it for beginners or those who are not in good/excellent shape. Nor is it for those who do not want to take the risks that adventurous sports require. Many skiers die each year skiing in deep powder in the back country, off-marked and groomed trails.

This is not a sport for sane people.

But if it wasn’t dangerous, exotic, hard to get to, it wouldn’t be any fun. It wouldn’t be worth dong. It’s like driving a Ferrari compared to your aunt’s Buick. 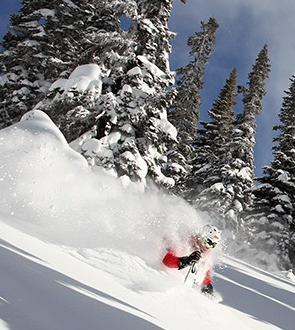 People are turning to heli-skiing to put some of the wildness back into the skiing experience.

Despite the high price and high risk, tens of thousands continue to flock to it every year, and if you have done it once, you want to go back.

Off-piste powder skiing has always been the ultimate high for intrepid devotees of the sport. But finding untracked powder at regular ski resorts is iffy and often requires a stamina and conditioning that most weekend warriors do not possess.

At Alta, in Utah, which is considered to have the best snow in the world — the driest, lightest, fluffiest — you have to climb up steep slopes for up to a half a mile to find the untracked power. And even then, most likely, someone has beaten you and laid down those lovely S turns that scream out Mine Mine Mine. I was here first!

With helicopter skiing, it’s you who does the first claiming of the territory, always laying down the first tracks. 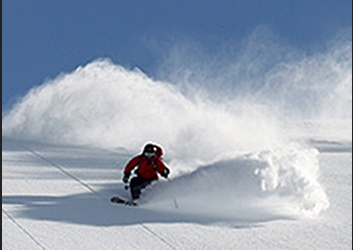 The best place for heli-skiing is British Columbia, with scores of operators. But for those who want the ultimate experience, two outfits stand out: Canadian Mountain Holidays (CMH) and Mike Wiegele Helicopter Skiing. Both are excellent operators, providing safe, as possibly be, efficient with the latest equipment.

CMH’s fatality rate is 32 in 106,000 skiers over 46 years, roughly the equivalent of 100 deaths a season in Val d’Isere, compared to an average of 39.2 deaths per year in ski areas in the United States, according to the National Ski Areas Association. Most heli-ski fatalities come from avalanches or from being trapped in tree wells, deep holes around trees that you cannot climb out of single-handedly.

The NSAA also listed that in 2012, 2,500 people drowned swimming or playing near water, 900 people died while bicycle riding, and 28 died due to lightening strikes.

After flying for 15 minutes to half an hour through pristine, awe-inspiring white mountains, the guide, with help from the skiers, will pick out a mountain top or slope to set down on.

Contrary to popular myth, you do not jump from the helicopter. It lands gently in a rather conventional way, and skiers crouch out under the noisy clatter of rotor blades whirling menacingly overhead. 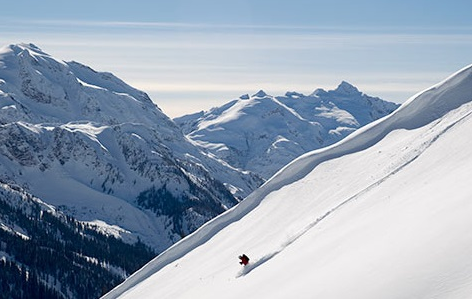 Then the helicopter leaves, and your group is alone in a remote mélange of clouds and mountains. The guides are fanatics about safety. We have all been given tranceivers, which emit signals so that your fellow skiers (if they are still around) can dig you out after an avalanche. The guides and Wiegele have a special center at the lodge which has studied these mountains for decades and can predict which snow will avalanche and which is more stable. The science of avalanche prediction has been improving steadily.

But you can never be completely sure. It’s certainly a lot safer than just wandering off trail in conventional ski resorts, which many skiers do in search of powder. Last year, 4.2 percent (428,400) of the nation’s 10.2 millions skiers ventured into the backcountry. The New York Times recently reported in a Pulitzer Prize-winning feature that 16 of the nation’s top free skiers were caught in an avalanche off a conventional ski area in Tunnel Creek, Washington. Three skiers were killed.

At Wiegele’s, I stayed in an attractive two-story, hand-crafted log cabin chalet, not far from the central lodge, which contained ski rental, clothing shops and a superb restaurant.

The lodge is a Shangri-La fairy tale version of the ultimate, super-exclusive ski village — best snow, never a lift line, exquisite food, and the most interesting people from the world over. They are all fit, world traveled and great skiers.

Food, which is included in the price, was the best I’d seen ever — an endless buffet that allowed me to pick from all of my favorite dishes: lobster, steak, caviar, and fresh fish, fruits, cheeses from all over the world.

The difference between Wiegele’s and other operations is that you are accompanied by two guides, instead of one. One leads and the other sweeps up the rear for stragglers.

CMH is also a unique experience. There are about a dozen remote cabins, each with 20 skiers, which you helicopter into and spend the week of great skiing.