Backcountry skiing superman Greg Hill was on a quest in March to ski tour 100 vertical Kilometers in just 31 days. The aptly-named, 39-year-old mountaineer set his goal to climb a total of 328,000 feet, summiting 30 peaks in the Canadian Rockies near his home in Revelstoke, British Columbia. Hill set out to accomplish this feat, the vertical equivalent of summiting Mount Everest every day for a month, ski touring.

Hill is no stranger to feats of endurance in avalanche terrain. A former randonée racer, he set the record in 2010 for the most human-powered vertical in one year (two million feet), as well as in 24 hours (50,000 feet). By requiring himself to work constantly for a month, Hill seems to have finally found a way to maximize his suffering. On a good day – mild weather, stable snowpack – Hill anticipates spending eight hours in the backcountry. On a bad day, twelve hours will be a success.

“My biggest month ever was 77 kilometers [253,000 feet],” Hill said. “But I wasn’t trying to max out my vert. So I’m really curious how this is going to turn out.” In the days leading up to March Madness, he enthusiastically blogged that ski mountaineering offers a very concrete measuring tool: “Vertical feet climbed = how much you have lived that day.”

Greg Hill’s March Madness – Half way there from FD Productions on Vimeo.

Now that it’s April 1st his time is up and it looks like he may just have done it. His last blog post states that he had only 21,000′ to go as of the end of Mar 29th after summiting Mt. Afton and Mt. Green. That gives him two days to ski tour the final twenty one thousand feet, easy for Greg, almost impossible for us mere mortals.

And now the month of madness is complete and Greg climbed 100km or 328,000 feet to complete his human powered powder session…congratulations Greg! 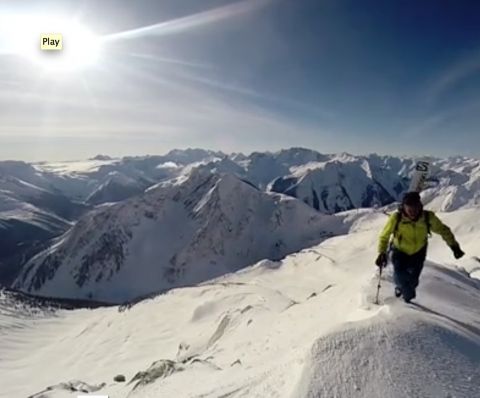