K2’s focus and commitment for the past 50 years is to skiers who ski the entire mountain, in all conditions. This same philosophy holds true in ski boots. They did not start with a rigid, intimidating race boot. They wiped the slate clean and built their boots from the ground up to maximize efficiency, optimize power transfer, and deliver performance over a wide range of terrain and snow conditions. The result is a complete line of ski boots that fit and function unlike any other boot, with a style that is uniquely K2.

What’s most interesting for the testers at Powder Canada is their new touring boot, the Pinnacle. The Pinnacle 130 has the performance of their hard-charging all-mountain ski boot, with all the features and technology that make it a premium freeride touring ski boot. Reinforced by the PowerFuse SpYne, the Synchro Interlock delivers a true 130 flex and uncompromised downhill performance, with increased fore and aft range of motion for efficient touring during walk mode. Add Integrated Tech Fittings,a 100mm and 97 low volume last, replaceable DIN-compatible outsoles that accommodate all bindings, the K2 PowerBuckle, and the PrecisionFit Tour INTUITION® liner and you have the ultimate freeride boot. The Pinnacle 110 isuilt with the same PowerFuse SpYne and Synchro Interlock technologies as the 130, the 110 ski boot provides exceptional all-mountain and touring performance in a more forgiving flex.

We will be riding both boots in late October and early November and will be sharing the vibe with our readers—stay tuned! 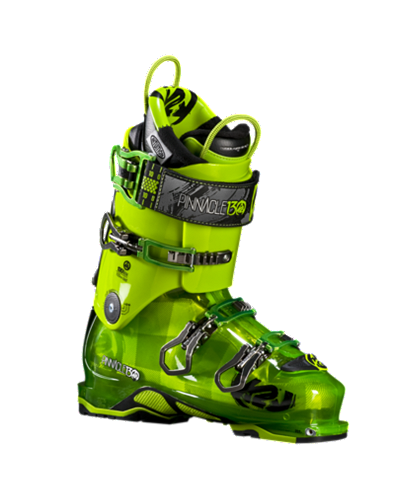