Powder CanadaPowder NewsSnow ConditionsWhat is the Risk of Riding in Avalanche Terrain?

What is the Risk of Riding in Avalanche Terrain?

Risk. Our lives revolve around risk but it’s a concept most of us don’t understand well. The human brain is good at many things such as pattern recognition and the nuances of social interaction but our brain is notoriously poor at statistics and probability.

People who are afraid to fly don’t mind driving although, on average, you would have to fly every day for 4,000 years for you to be killed on a commercial aviation flight. Automobile fatalities are so common you hardly see them mentioned in the newspaper anymore (32,000 per year in the U.S.)

We’re afraid to let our kids ride the bus to school yet there are only 3 deaths per year on school buses and 600 per year from parents driving their kids to school.

So what is the risk of recreating in avalanche terrain compared to other activities? The list below is in units of a “millimort”, which is one death in a million. I have converted all the numbers into millimorts per day so we can directly compare activities using consistent units. A Millimort is a convenient unit because one millimort is the chance of dying per day for an average 20-year-old from all causes. 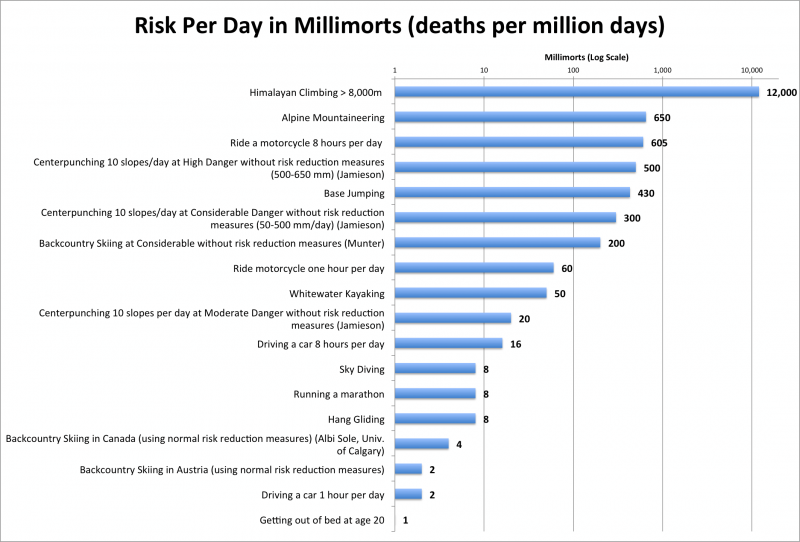 OK, you say, there’s a big difference in risk between an extreme skier out with their friend with a video camera and a snowshoer walking up the trail. True enough. And those same differences occur in each of the activities I’ve presented here. But each number comes from published data and each is an average of all the risks in that activity. For instance, the number for motorcycles includes both riding a sport bike in a city (an extremely risky activity) and going a few blocks to school on a moped.

Here, I’ve presented the data both as a table and a chart. Notice that the chart displays the data in a logarithmic scale, meaning that each line on the horizontal axis is 10 times greater as you go right. The differences in risk between activities is is so great that it won’t fit on a linear scale, I need to change the scale to logarithmic to see it all in one chart.

Backcountry recreation is surprisingly safe but, as usual, it depends. If you use all the risk reduction measures taught in avalanche classes and using modern rescue equipment, the risk is about the same as driving a car one hour to the trailhead (notice driving a car 8 hours is more dangerous than backcountry recreation). This agrees with my experience although I often feel more at risk driving among Utah’s famously hyper aggressive drivers in monster vehicles than an ordinary day of backcountry touring.

People often wonder about the risk of randomly center punching a slope without using any risk reduction measures at various danger ratings. These numbers come from Bruce Jamieson’s 2009 ISSW publication where he estimates the risk and compares it with similar estimates from Werner Munter from Switzerland. You can watch a video of Jamieson’s presentation at http://vimeo.com/50900661. You should also look at the rest of their fine video presentations at the University of Calgary Applied Snow and Avalanche Research. http://www.ucalgary.ca/asarc/research/outreach

Someone who randomly center punches 10 slopes per day in terrain rated as Moderate Danger is roughly the same risk as whitewater kayaking or skydiving (but still much less dangerous than riding a motorcycle). Center punching 10 slopes per day in terrain rated as Considerable Danger has roughly the same risk as base jumping, which is considered to be one of the world’s most dangerous sports and one with a notoriously short expected lifespan for regular participants. Doing the same in terrain rated as High Danger is one of the most dangerous activities in the world besides climbing above 8,000 meters.

Bottom Line:
Recreating in avalanche terrain is surprisingly safe as long as it’s done using all the risk reduction measures taught in avalanche classes. It’s about the same risk as driving one hour to the trailhead. But randomly center punching 10 avalanche paths per day without any risk reduction measures at Consderable or High Danger can be one of the most dangerous sports in the world.