BC’s Red Mountain is extending a new chairlift up Grey Mountain. The fixed-grip Poma quad chair is on schedule to be completed for the 2013/2014 ski season.

In addition to the ski area’s Red and Granite peaks, skiers can now access one more stellar peak, Grey Mountain by chair lift — with 360-degree skiing off the top. This development of Grey Mountain marks one of the single largest expansions of an existing resort in North America in four decades. It places RED Mountain Resort firmly in the scale of resorts such as Breckenridge, Colorado or Jackson Hole, Wyoming in terms of skiable acreage. Grey Mountain adds 997 acres to RED bringing the total skiable acres to 2,787. This puts the “local legend” hill in the Top 20 of all North American resorts in terms of terrain scale. 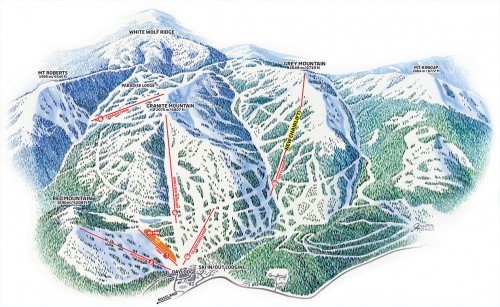 Funding for the new chairlift came in-part from a loan from the Southern Interior Development Initiatives Trust (SIDIT). SIDIT’s funding programs are specifically targeted toward investments in self-sustaining projects that support the ten mandated themes as defined in legislation. Performance measures include job creation, retention and enhancement, increased revenues, sustainability, leverage and economic diversification to the Southern Interior area of British Columbia.

“History shows that resort terrain expansions entice new, passionate visitors,” says Fran Richards, Vice President of Marketing. “We expect a significant increase in lift ticket sales as a direct result of this new, lift-accessed terrain — and that obviously spells good news for the local and regional economy. RED is already here and already a huge draw for the region. We want to grow, but only in a sustainable, organic way that respects the experience — a ski experience that we all love and that is harder to find these days.”

“Destination skiers have unique needs,” explains CEO Howard Katkov. “They come for the powder and fall-line vertical, absolutely, but they also need coffee in the morning, groceries to fill up that condo fridge, rental cars, gas, beds to sleep in and a few beers après-ski! They need entertainment, fine sushi and maybe a nice bottle of wine to take back to their room. This ultimately means more jobs in the Rossland area, a more robust and diverse local economy, and more of the word-of-mouth that put RED on the map in the first place.”

“This expansion into Grey will keep the pace and passion of the RED Mountain Resort experience intact while offering expanded intermediate terrain selections for families and mixed-skill groups,” Katkov continues. “This new Grey terrain alone is about the same size as Mount Baker. It has to be skied to be believed. There’s the same fall-line runs that RED is famous for, some new tree runs that already seem like favorites, and plenty of mellow glades on the southern slopes.”

Hardcore snow sliders will love the challenging new chutes and steeps off the north and eastern slopes of Grey. “We feel the new lift will enhance the experience for all our customers,” says Katkov. “Lift-lines have never been a deterrent around here…and the new lift on Grey will spread guests out even more. Local powder fiends have nothing to worry about and new visitors have a lot to look forward to.”

The Grey Mountain expansion makes RED the 8th largest ski area in Canada and, for comparison, the 18th largest in the USA out of approximately 500 resorts. Located just 5mi/8km north of the USA/CAN border, RED has long been a key component of both B.C. and Washington skiers’ diets, not to mention a hot spot among the world’s “powder vanguard.”

With 2,919ft/884m of vertical on offer from the top of Granite and 2831ft/863m of vert off the new peak on Grey, it’s no wonder The New York Times voted Rossland/RED Mountain their “Number 8 Place to Visit in 2013,” citing the expansion as a true game changer: “Suddenly RED’s trail map will stretch as wide as Jackson Hole’s inbounds terrain. With a new lodge and the first on-hill accommodations added in the last few years, this local legend is ready to step out into the spotlight,” writes the New York Times’ Christopher Solomon.