Whistler’s Air Jordan has always had a lemming effect, but then so does Whistler. Those waiting in the long line up for Whistler’s Peak chair noticed a row of people at the top ridge, they knew something big was going down.

They soon saw a skier doing a backflip off the bottom of Jordan, and then a skier in a red suit comes flying through the air like he was just shot out of a cannon, all sideways. It was said to be absolutely unbelievable and apparently that’s bread and﻿ butter for Iceland’s Julian Carr. 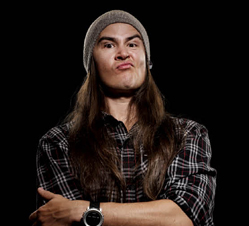 Julian didn’t land on his head, he landed on his back. Apparently intentionally! An associate was quoted saying, “Landing with more surface area distributes the force of the impact. If he’d tried to﻿ land on his feet from that height, he’d either break his legs or smash his knees into his chest.”