Daryl Treadway, Mark Cunnane, and I stood on top of Mount Ascarani, in the rarefied air of the Bolivian Andes. Mark and I had abandoned our skis at the base of the steep, intimidating headwall. Our other two companions, Dave Fuller and Chris Seashore, had not only put down their skis, they had elected not to summit and were waiting below. Climbing up, I was wearing crampons and using one ice-axe, and wishing I had two axes for additional security. I couldn’t comprehend that the face was skiable – steep, icy, riddled with potentially deadly crevasses and rock bands.

When Daryl stepped into his skis, the click of the bindings seemed uncompromising in the otherwise still air. I didn’t want to intone negativity at a time when confidence was so vital, but the words spurted out, “Hey buddy, if something happens, rescue would take a week, or two.” Daryl smiled — that warm, embracing smile that I saw so often in the brief time we had been traveling together. Then he slid to the edge of the lip, and did a quick jump turn into the fall line.

In every bar, at every ski town, we watch people drop big lines as we sip beer and chat – until it is almost a cliché. But up there, feeling the cold and the daunting remoteness, this was no cliché, it was a “fall you die” line, by a close friend, bonded by time spent on crowded buses, dirt floor cafes, and long treks with a string of Andean ponies carrying our loads. Daryl didn’t merely get down the mountain; he skied it at speed, reading the terrain with lightning fast instinct and launching over crevasses and cliffs without breaking stride – without cameras, film, or glory – just for the innate love of Going Big.

That was eight years ago. Every year, in every sport, people up the ante of what it means to Go Big. Last month, 25-year-old Caleb Moore died after missing a back flip on his snowmobile during the Winter X Games, in Aspen Colorado.

OK, let’s think about this. First you drive a sooped-up, turbo-charged, nitro -fueled 450 pound machine off a launching ramp. And then, somehow, you rotate the thing. If you’re really good and want to win, you let go of the handlebars and detach yourself from the machine altogether, each of you on your own arc, independently flying through space, upside down, 100 feet in the air. 100 feet? Yeah, I’m not making this up. The height of a 10 story building.

Just in case I was a complete and utterly detached, blind-deaf-and-dumb idiot, the X-game announcer proclaimed, “A lot of people here would never dare do that.” Thanks. Roger. Got it.

OK, so after young Caleb fell short on his landing and crashed on his head, with the machine tumbling on top of him, he stood up, with a wave to the crowd and a Rocky Raccoon smile, “Hey Doc, it’s only a scratch.” and walked to the medical tent. He died a few days later.

Comments posted on newspaper accounts of the tragedy fall into two camps. Many people argue that people have died, Going Big, since cave men wrestled grizzly bears. Thus, although occasionally tragic, risk-taking is part of our evolutionary heritage. Others counter that Caleb, and others like him, are willfully and knowingly sacrificed by greedy corporate gear manufacturers and broadcast media who sit safely in their comfortable offices, reeling in the cash.

I refuse to weigh in on either side. Long ago I’ve learned that I can give advice to the world, but the world usually doesn’t listen to me.

But at the same time that ESPN and Polaris and all those other corporate entities probably don’t care what I have to say, maybe some individual athletes will listen, so I have an observation to make. (Before we go there, just to be sure I don’t get accused of the “pot calling the kettle black” I remind everybody that twice in my life I’ve been evacuated to major hospital trauma centers in medically equipped aircraft.) 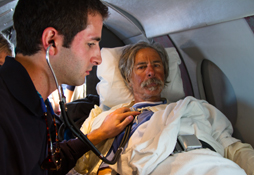 Let’s break this down into basic, simplistic terms. If you attempt to Go Big, in any sport, either you pull it off and end the day with a smile on your face and perhaps a wad of cash in your pocket, or something bad happens and you end up in the hospital – or worse. In some sports, even if you have a good day and execute perfectly, you still damage your body irretrievably. Being an interior lineman in pro football is an example. Every game, you incur a number of mini concussions, and at the end of a career, even if you have never been carried off the field on a stretcher, you are guaranteed to live your life with brain damage. In other sports, if you have a good day and execute perfectly, you don’t damage your body. An extreme example of this is free-climbing (rock climbing without any rope or protection, just shoes and a chalk bag.) When Alex Honnold free-climbed Half Dome in Yosemite, he would have died, for sure, if he had missed a move. But if he pulled it off, which he did, there was absolutely no impact or trauma to his body.

I’m 67 years old, and despite a few injuries and some surgeries, I’m still able to ski reasonably decent lines, reasonably regularly, in the mountains I love. I know it’s hard for young athletes to imagine being a geezer, but before you decide to GO Big, my advice is to think about the potential damage to your body, even if you don’t fuck up. Remember, that with a little consideration, your body can bring you a lot of joy for a long, long time.
Many years ago, some friends and I were driving along a windy, wooded road to the put-in of the Lochsa River, a local kayaking trade route. We saw a guy pogo-sticking down the road, with one thumb out, hitchhiking; so of course, we picked him up. “Where are you going?” “To the Rainbow Gathering, in Oregon.” “Don’t you have a sleeping bag, tent, or warm clothes, or anything.” “Naw, don’t need ‘em. It will all work out.”

There are a lot of ways to Go Big.