“Any rapid change in the mechanical or thermal energy state of the snowpack is a precursor to avalanching. And I emphasize rapid.”

It’s important to know how we got to this point, here’s a brief recap:

December brought consistent snowfall which gave us a great start to the winter. The snow shut down right around Christmas and then it went high and dry until January 4th or so. During the high and dry period danger ratings were low and folks were able to ski and ride almost anything without risk of avalanches.

While folks were busy getting after it in the alpine, the surface of the snowpack was changing. We ended the high pressure period with small facets, surface hoar (up to 12mm) in sheltered treeline and below treeline areas and sun crust on steep south and west facing slopes. See Penny’s January 11th blog post for more about what we do/don’t know about this surface hoar

We opened the door to “zonal flow” on January 4th. The mountainous regions of the province received 50 – 100cm of snow. We had a cycle of what we call direct action avalanches as the weak surface failed under the stress of its new load. Chatter amongst pros was full of avalanche observations and it was kind of a no brainer as to what was happening. Avalanche danger was high and slides were running naturally. Essentially the house was coming down.

Then it got cold as dry arctic air crept into the province. The big puffy jackets came out of closets from Vancouver to Revelstoke while our neighbors to the east laughed at how soft we interior folks are.

Activity on the January 4th interface dropped way down as both time and temperature tightened up the snowpack. When you put things in the deep freeze, they have a tendency to do that.

There’s been lots of slope testing this weekend in the form of explosive control work and recreationist getting after it. Most regions have dropped to Moderate at all elevation bands. Like Penny, I wish I was out there slaying it with all of you! But alas, these forecasts don’t write themselves.

Well, on Monday the ridge of high pressure shifts to the east which opens the door to a massive amount of warm air currently sitting off the coast of BC. As the warm air enters the province it will override our current cold air. This should set the stage for inversions as cold air remains pooled in the valleys while warm air joy rides its way into the treeline and alpine. It looks like the boundary will be somewhere around 1000m. Below that, it will stay cold, above that, we could see ridge top temps as warm as +5. That’s a 20° shift in temperature in a matter of hours!

If there’s one thing to remember about snow, it’s that it hates rapid changes. Atwater figured this out in 1954 and it remains a stalwart of avalanche forecasting.

An avalanche forecast is only as good as the weather forecast behind it. Right now, the best Meteorological brains in Canada tell us that we’ll see an AFL, or “Above Freezing Layer” from about 1000m to 2500m. This warm air will first become a factor in Yukon and the North Coast late Sunday, creeping into the Northwest Inland Monday. It likely won’t enter the airspace of the Columbias and central interior until Tuesday. With the wild topography of our great province, this warm air is going to get beat up and forced in directions we can’t currently anticipate. Some areas will get it, some areas won’t. In 10 years we’ll probably all laugh at the rudimentary weather products we currently rely on, but that’s the deal for now. The bottom line is that it’s going to affect much of the province but we can’t pin down the exact timing and intensity.

As an avalanche forecaster, I’m prone to turbo-geekyness, so I’ll briefly touch on the mechanics of what I’m hypothesizing here. Essentially, I think that we’re relatively poorly acquainted with the January 4th interface. We think that it’s mostly blown out of the Alpine, but I suspect there are still many slopes in the alpine that are harboring this weakness. We know that it’s relatively widespread at and below treeline. When it’s really cold, the pack tightens up. Creep slows way down and our stress bulbs (how deep your weight is getting into the snowpack) are relatively shallow. (See Ilya’s blog on stress bulbs below) When it warms up, creep is going to increase. That will put more strain on the weak layer as the upper snow begins to creep downhill that much faster. Natural avalanches are possible and a lot of terrain is primed for triggering in the form of icefall/loose snow avalanche/ human interaction.

Many slopes slid during or just after the most recent storm, and those won’t likely be a problem. It’s the slopes that didn’t slide that I’m worried about. (The bad news is that it may be hard to tell one from the other as wind and snow reloaded many slopes that actually did slide during the storm.)

I’m also concerned that many folks were out there crushing it this weekend and subsequently gaining a lot of confidence. It’s appropriate that confidence with the current situation is good, but the situation that’s coming down the pipes is ENTIRELY different

Speaking with Ilya, I’ve come around to the thinking that solar radiation is probably the primary, temperature secondary. Therefore, watch the sun. Also, if you’re an ice-climber shivering in the shadows, thank about the big bowl overhead.

If you have a helicopter, I’d recommend lifting off as soon as you have VFR, and then skiing north facing terrain, pulling the plug as soon as it gets warm. Recreationist may be able to emulate this by getting up super early and skiing/sledding something that has them off big terrain before lunch. But, you’ll need to be realistic about the day and be willing to pull the plug the moment it starts to heat up. It gets trickier yet, because it will be cold down low! (It’s not until you get between say, 1000m – 2500m that you’ll actually feel the warming.)

Of course we won’t actually know until it’s happening. My guess is that it’s the initial warming that will be the big issue, but it could easily be the sustained warming on the second day that initiates a cycle. The important thing is that you are aware that the situation is changing and the reality is that we’re unsure about the timing. It’s a period of great uncertainty and new you need to adjust your plans accordingly. Good luck! 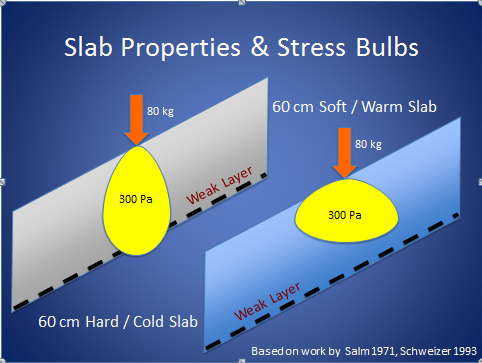 Imagine yourself riding a sunny slope. As you carve turns or take a little air your shadow follows your every move and there’s no escaping it. Now imagine how you’re affecting the snowpack with your weight as you carve, sidehill, or land big air. You add stress to the snow, and also following you, like a second shadow, is an invisible stress bulb below you. Your shadow’s shape changes as your move depending on where the sun is and the shape of the snow surface. So too does the shape and intensity of your stress-bulb, depending on what you’re doing and the snowpack structure below. We think, based on current snow science research, that our stress bulbs penetrate deeper in softer and warmer layers than through harder and colder slabs. In other words, all else being equal, forecast warming suggests that your stress bulb is more likely to tickle a weak layer in the days ahead. And here’s the rub – the warming doesn’t need to actually reach the weak layer. That weak layer can still be nice and cold; it’s just the slab property that changed.