There are two kinds of skiers in this world. Those who receive new skis for Christmas, and those who don’t. But fortunately, if you’re in the unlucky class, you can rectify the situation by buying some new boards for yourself.

I’m a writer and I live on uncertain and sometimes meager income. I’m a champion of “spend less” rather than “work more”. So how can a low-lifer like me come out with a straight face and encourage consumerism?

Well, let’s compare my new K-2 Sidestashes with my battered 17 year old pickup truck. Today was a powder day with 37 cm of new. For me, getting to the resort was not a sporting event. I got up early and felt no burning need to pass slow traffic while dodging loaded logging trucks. But skiing is a sporting event, and once I get off the lift, I want a Ferrari underfoot. 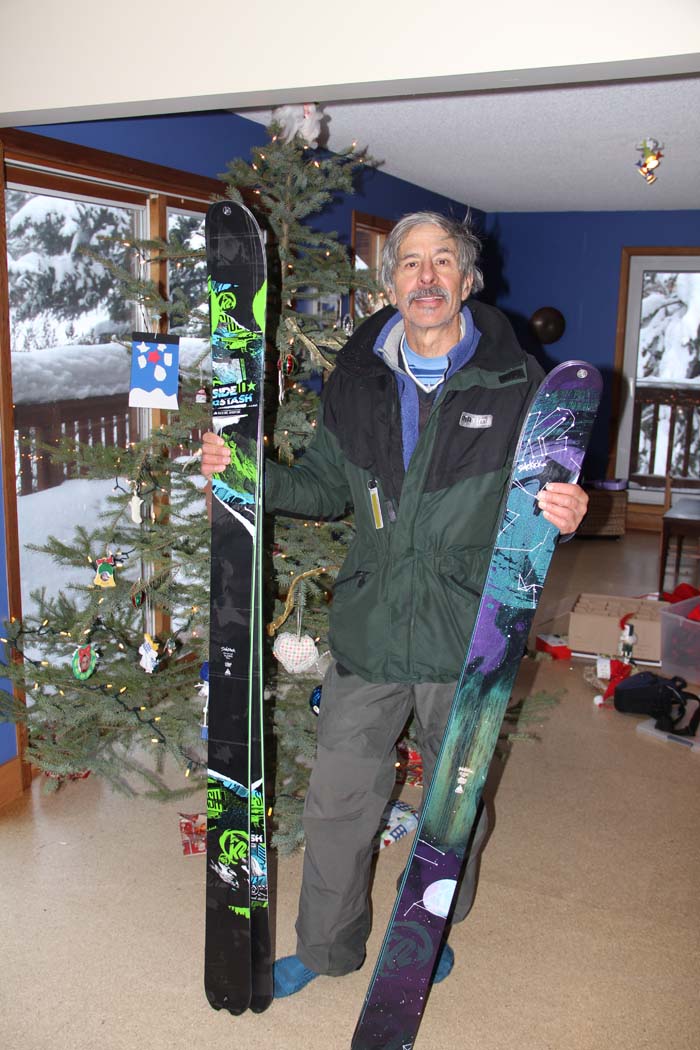 Why are modern skis so much better than last year’s models; why do we need new skis at Christmas? To answer this question, I interviewed K-2 ski engineer and designer, Andy Hytjan:

Jon: Ski technology seemed to putter along for a long time without any major changes in design and construction. Then, poof, in the last 5 years, massive innovation and change seems to occur every year. How do you innovate so quickly?

Andy: Here at K-2, we’ve developed a close relationship between our athletes and our design engineers. In the old days, it took a year to build a prototype ski. Now, if an athlete comes up with an idea, we can build a prototype within a week. Not every idea works, but by encouraging our ski athletes to think out of the box, and by turning ideas into experimental prototype very quickly, we can drive innovation at an accelerated rate.

Jon: In the old days, the paradigm was that if you were a good skier, you wanted a stiff ski for stability on a hard turn. Now, a ski is responsive in powder and crud, but also holds an edge in bumps and groomers. This seems magic to me. How do you do it?

Andy: The two basic elements of this magic are rocker and the innovative use of new materials. All modern, high performance skis depend on rocker to be responsive — to initiate the turn effortlessly. Once the ski initiates, the goal is threefold:

(a) Dampen the force transfer. You want to feel the mountain, but you don’t want every bump and icy patch to launch the ski into chatter-mode and throw you around. We have developed a secondary core that acts as a suspension system, quieting the ride of the ski without affecting the overall flex.

(b) To maintain torsional rigidity, for edge control throughout the turn. Torsional rigidity is partially a function of materials and sidewall construction. But in addition, we add a raised super light, X-Shaped carbon support on top of the dampening layer, to keep the edge firmly on the snow without wus-ing out.

(c) Keep the ski light. All aspects of modern ski design depend on new lightweight materials, many of which have been developed in the aircraft industry. It’s essential to keep overall weight and swing weight to a minimum.

(As an aside, next time the USA announces its intent to attack China, or some such foolishness, remember that the new aluminum alloys, carbon fibers, and fiberglass developed by the defense industry will end up increasing your ski performance. I don’t know what the take-home lesson on that is, just an idle thought.)

Near the end of our conversation, Andy turned the tables and asked me to tell him what I wanted in a ski. I explained that in the back country you might jump into a gully line and find the top three turns to be boiler-plate wind-slab, which then morphs quickly into soft pow once you hit the tree line. So I want a ski to be optimal in all conditions.

Andy’s response, “Here at K-2 we agree with you wholeheartedly, Jon. As we continue to experiment with new materials, tweak rocker design, and develop high tech secondary and tertiary cores, we feel that we are very close — but striving to be even closer — to that grail of a ski that performs from top to bottom in a backcountry gulley – or on a variety of different days at the resort.

I was giving a talk at Purdue University a while back, and one of the students asked me about the finances of being a writer. I told him that the septic system in our house went belly up, so my wife and I now shit in a bucket of sawdust. But we buy new skis every year. Because new skis really are better than last year’s models.