Into The Mind From Sherpas Cinema

Talk about a ski movie trailer that would make a fan out of the most hardened skeptic.

Sherpas Cinema, which is based in Whistler, has rolled out the trailer for “Into the Mind,” a ski movie that asks what drives the mountain addiction?

“It’s meant to be an exploratory epic into the depths of human potential, with the lines blurred between dream state and reality,” Sherpas Cinema co-director Eric Crosland told ESPN.

The average ski movie has a pretty simple formula: turn a camera on a group of thrill-seekers and watch them play in the mountains. Add a soundtrack featuring punk bands NOFX and Millencollin and you’re set. “Into the Mind” goes several steps further.

The trailer begins with an elderly monk twirling a ceremonial instrument as a “Baraka”-like chant plays on the soundtrack. A grand shot of a majestic mountain range with perilous terrain for skiers and mountaineers follows.

The trailer incorporates just about every film trick you can think of, and blends them beautifully.

You see an ocean wave engulfing you beneath the water. You see closeups of snowflakes as the sun reflects through them. You see time-lapse shots of the sun rising, snow melting and clouds passing over the landscape.

The team behind “Into the Mind” previously made “All.I.Can,” an “exploratory essay” that followed its subjects through countries including Morocco, Greenland, Chile and Alaska.

If the trailers are any indication, these films are far more than your average ski movie. 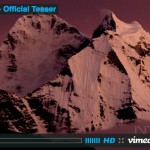