In all mountain travel there is an assumed risk, one that we take since we are searching for adventure. The perception of this risk usually changes with the objective, quite often becoming clouded as the objectives get personally more important.

I am not really even sure where to start. I will begin part way through our expedition;

We were getting acclimatized and moving quickly up to around 7000m on Mt-Manaslu. As our group toured higher they encountered loud whummfing sounds . Which is a settling of the snowpack that indicates a weak bottom layer. At this point it was simply an indication of weakness that would get worse with a heavier load…. We turned around and skied down, experiencing amazing skiing at the highest elevation I have ever skied. 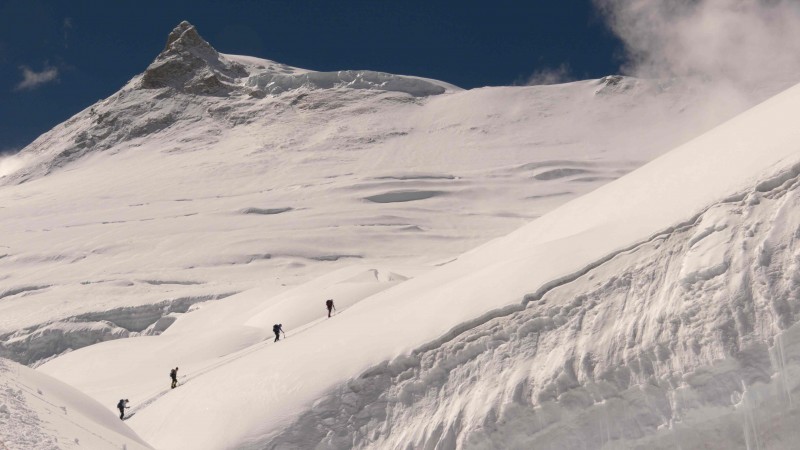 For 10 days we weathered rain and snow, day after day of it. So the upper mountain was getting loaded with the weight of new snow. When it finally cleared it was obvious that most of the mountain had gone through many avalanche cycles. There were crown lines, and avalanche debris everywhere. Though the slopes that we needed to climb had not slid. We waited a few more days for the snow to stabilize some more before venturing onto them.

A bit of a backstory is needed… Tibet’s borders are closed to expeditions this year and most expeditions have re located to Mt-Manaslu., that’s why we ended up here. Our plans for Cho-Oyu were canceled and our ski objective became the eighth highest mountain in the world. We arrived on Sept 6th and watched basecamp grow into over 300 climbers and 200 sherpa. More climbers than this place has ever seen in a season. It seemed ripe for a catastrophe of sorts.

On our way up on Sept 22nd, we could see a line up of climbers on the fixed ropes, a traffic jam moving slowly through the seracs. Easily over a hundred people on their way up to Camp 2. We were coming late so we could avoid this and get up to our Camp 2. 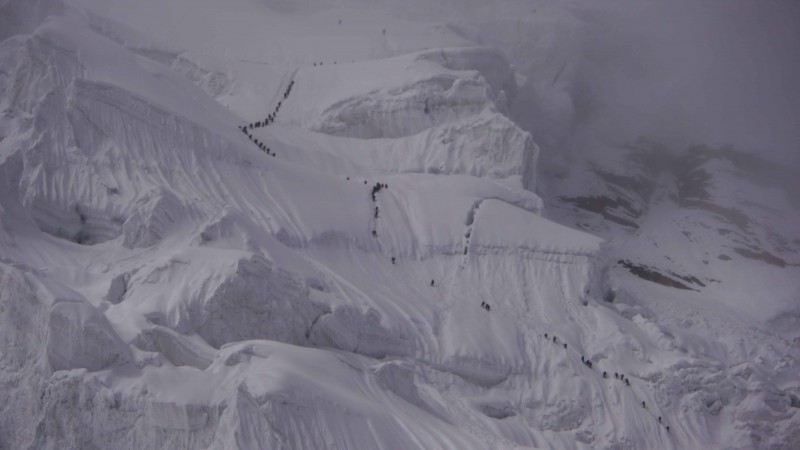 When I first saw the traditional Camp 2 placement I knew that there was no way I would camp there. Sitting under the imposing face of Manaslu, I would never be able to sleep knowing how much avalanche terrain was above me. It was a campsite that has proven to be safe over the years, but given the right conditions it could get hit by a large avalanche. We searched and finally placed our Camp 2 off to the side. Perched on an ice shelf, it was as “safe” as we could find, a small elevated bit of terrain away from the main flow from the face.

On Sept 22nd, we arrived at our camp 2, I looked up and saw many tents camped at 6800m directly in the center of the slope, Camp 3. I worried about this but could not do anything about it

We went to bed thinking we may try for the summit the next day, depending on how the snow had stabilized. Which is information we would get ascending the slope the next day. The stability could go either way, the new snow could have compressed the weak layer and bridged any weakness, allowing for safe travel. Or the new snow, combined with the wind could have created a slab of snow sitting precariously on this weak basal layer…..

It turned out to be exactly that. At 4:45 am the cold temperatures created some brittle seracs, which broke off from the glacier at 7400m and landed on the wind slabbed snow, giving it enough of a trigger to crack approximately 300m across the slope. This avalanche swept through Camp 3 catching everyone sleeping in their tents and wrapped in their bags. At least 16 tents were swept off their platforms and sent careening down the mountainside. 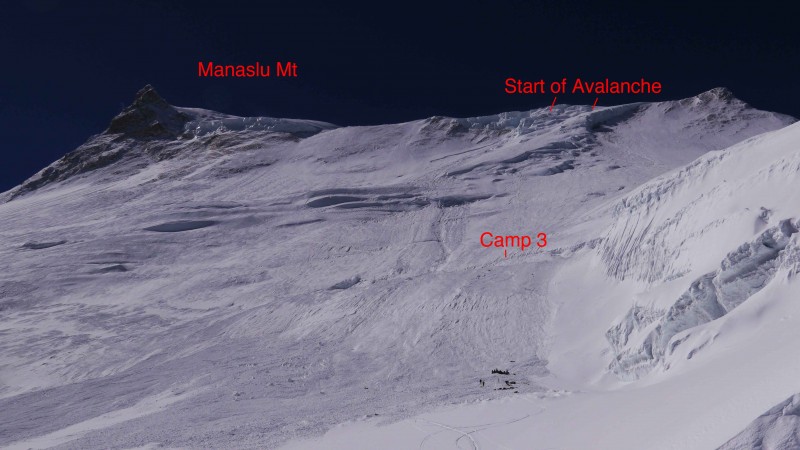 The blast of wind from the avalanche sent our tents flapping and soon enough we could hear people yelling for each other. Lights from headlamps accompanied many voices and we knew that disaster had struck.

Skinning up, our headlamps lit up a down boot, and we knew that the tents had been hit. Tents, clothes, sleeping bags, lone boots, everything lay partially buried everywhere. Within minutes we were helping people get warm and digging others out of the snow. It was hard to tell how many people where involved so we focused on those that where above the snow. Knowing that those who were buried had very little chance of surviving.

The variety of injuries was astounding, some people were “OK” from their 1000 foot tumble, others were so full of internal injuries that life escaped them quickly. Some had arrived sitting on top of the debris while the tent beside them was completely buried in hard suffocating avalanche debris. There were injured people stuck in their tents with the dead body of their tent mate wrapped around them. The line between life and death was inches. Some people were talking to their tent mates as it happened, and when the avalanche stopped their partners were nowhere to be seen.

Immediately our group started helping out, digging out those that we could. Providing oxygen, warm clothing and any care we could. Stabilizing and helping out everywhere. The cold temperatures and high elevation made it essential that we get people warm. There were people partially buried with broken ribs and dislocated arms that we dug out and helped get warm. Others that were so injured we provided the as much care as we could but still watched them fade away. Through some miracle there were lots that simply needed sleeping bags and warmth. We spent 5 hours helping people, mourning with people as they watched their friends pass away beside them, digging a helicopter platform and moving the injured people close enough to fly them away once the helicopters got there. While also digging out the deceased and trying to locate any other missing people.

At one point I sat and openly cried for those that had died.

The line was so thin today, many survived by pure luck,while their friends passed away. With adventure comes risk. But I wonder how many people who died yesterday fully understood the personal risk they were taking. Obsessed with the possibility of climbing one of the world’s highest mountains, our vision becomes clouded and we perceive the risk we want instead of the reality of what is around us.

My heart goes out to all those that passed away today.