Skiers both in backcountry and in-bounds areas are advised to use extreme caution this week as the avalanche danger soars.

Both backcountry and in-bounds skiers face heightened avalanche dangers this week, according to the latest bulletins from the Canadian Avalanche Centre. 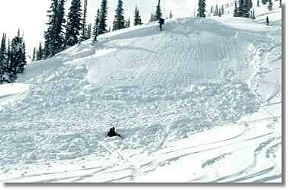 There are level 4 danger ratings in effect throughout the Sea-to-Sky, Whistler Back Country and South Coast Inland regions. At this level, the danger of avalanches is “very high,” particularly at alpine and treeline levels and “travel in avalanche terrain [is] not recommended.”

At Whistler-Blackcomb resort itself, backcountry alpine conditions were rated high on Wednesday, considerable at treeline and moderate below treeline. The alpine danger was expected to moderate to considerable by Thursday.

“These old facet weaknesses from November are just waiting for the right trigger to cause them to collapse and propagate into the surrounding terrain,” the resort reports. “Careful route finding will be very important after every storm cycle for the next little while.”

“Size-two slabs” have been dislodging since Saturday, and Wednesday’s snow is now adding to the danger at the resort.

The North Shore bulletin advises keeping an eye out for storm slabs, as mixed rain and snow over the next few days can lead to problems on steep or convex terrain. The area has so far seen about 40 centimetres of new snow, wet and heavy with rain, settle over a crust.

Most avalanche deaths in Canada in recent years have been the result of backcountry skiing and heli skiing, according to the statistics. The newest group to experience fatalities are snowmobilkers and this is due to improvements in technology allowing riders to attain avalanche terrain. For detailed statistics download the pdf here: Fatality Statistics_ CAC media page(1)

Over the holidays, there have already been some near-misses in B.C.

On Monday, there were four skier-triggered avalanches in the Purcells. On Tuesday, another skier triggered an avalanche in the Lizard range, but was not buried or harmed. On Dec. 26 a skier accidentally triggered a size 2 avalanche in the Spearhead range. Luckily, according to the CAC, it was only “a close call that resulted in some lost skis, but fortunately no full burial or injury.”