For the fourth ski season in a row, G3, manufacturer of industry-leading gear for backcountry and sidecountry skiing, will team up with sponsoring partners to give skiers four chances to see their graphics atop a pair of limited-edition G3 skis. The G3 Skigraphiks contest has been rapidly growing each year with more than 250 entries in the contest last year. 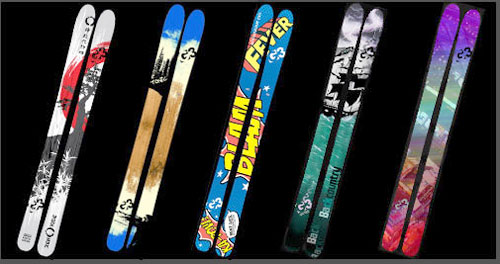 Affiliates will promote the contest on their web site and link traffic to the contest page on G3’s web site. The contest started in September this year, rather than October, which will allow the winners to ski on their own designs this season.

On all entries, G3’s logo must be used in the design. In the three contests affiliated with the online retailers, their logo must also be used in the respective contest that they are sponsoring.

For each contest, skiers can submit their designs at g3skigraphiks.com, where the public gets to vote on them. Four winners, one each month, will receive a free pair of custom designed skis with their graphic on the top sheet. The grand-prize winner, chosen two weeks after the last contest ends on Dec. 31, will receive a ski package valued at over $1,400. The package will include a pair of skis with their winning top-sheet graphic, as well as G3 skins and G3 bindings. The skis will be shipped between six and twelve weeks after announcing each winner.

Last year’s winning designs ranged from a bright cartoon graphic to a tranquil Japanese-inspired, ‘zen’ graphic on the ZenOxide. The winning artist, Patrik Johansson, said he wanted to create a design that “visualized the name of the ski.“ Last year’s winning graphics are posted on the G3 Skigraphiks website.

Once a winning design is chosen for each round of the contest, the custom-designed graphic will be available for sale to the general public through the sponsoring partner website.

About G3
Based in Vancouver, B.C., G3 Genuine Guide Gear is manufacturer of industry-leading gear for backcountry skiing. It has been making avalanche safety equipment since 1995. The G3 product line includes skis, alpine-touring and telemark ski bindings, climbing skins, avalanche shovels, probes and other ski accessories. G3 was founded on the principle that gear built for backcountry guides should be manufactured to the highest standards, which has helped the company gain a reputation as an industry innovator.