Whistler Blackcomb has instituted a new height restriction for all skiers and riders due to the area’s prodigious, record-breaking snowfall this season. The policy is intended to prevent guests from drowning in the bottomless pow. 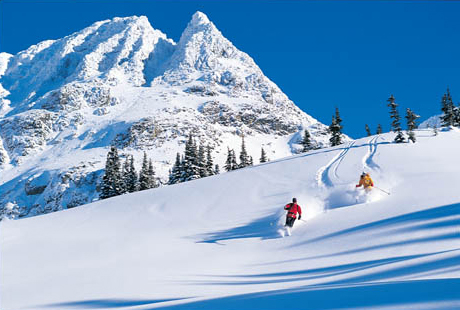 To that end, the resort is prohibiting guests shorter than 350cm/11.5 feet tall, the current snow base, from accessing Whistler Blackcomb without a snorkel, shovel and point of view camera.

The resort may also require guests to carry sirens. Before the policy went into effect, mountain safety teams were frequently able to locate individuals immersed in snow by following their cries of “woohoo!” and “yeehaw!”

“Having too much powder is a big problem here at Whistler Blackcomb,” said John McGroomer, senior vice president of snow surface preparation and guest relations, citing widespread instances of selfish behavior and intolerance of others. “Not only do we encounter a lot of powder frenzy, many powder hounds adopt a ‘no friends on a powder day’ attitude,” leaving many relationships strained, McGroomer lamented.

Whistler Blackcomb was forced to institute its height restrictions after nearly 46 feet of snow fell this season, well above the average annual snowfall of 33 feet. Thanks to the new regulations, however, the area plans to remain open for at least 50 more days.

Ironically, Whistler Blackcomb chose to reiterate its intention to remain open for nearly two more months on April Fool’s Day, making it nearly impossible to separate the fact from fiction in the announcement above. Any light you can shed on which is which, dear readers, will be greatly appreciated.