As plans for a last minute trip to visit our friends in Nelson came together, we loaded up the kids and the skis and hit the road for Nelson right after Christmas. We’d skied Nelson’s local ski resort Whitewater before, in rather thin early season conditions, so had no real expectations for great conditions, but had hopes of getting some turns in our legs.

Whitewater is known for it’s powder skiing, situated in the West Kootenay “powder belt” and at a high enough elevation that it often avoids the rain or melt-freeze conditions that can affect other areas. This year, Whitewater installed a fixed grip triple chair, purchased from Vail, Colorado. The new Glory Ridge chair doubles Whitewater’s vertical and opens up a huge swath of new terrain on the backside, previously out of bounds.

We woke up on our first morning in Nelson to reports of 15 cm fresh on the mountain. We got the family loaded up and headed for the hill. All the parking lots were full with overflow parking on the access road. The lodge was busy, but we soon found ourselves in the lift line, ready to head for the new Glory Ridge. My guides were my good friends Rob and Michelle Stojanowski, owners of Nelson’s ROAM Shop.

I was excited to try my new skis, Volkl Mantras mounted with Marker Baron bindings. The Mantra’s are fat by Rockies standards, but a little skinny compared with what you see at Whitewater with a 96 mm waist. However, as the fattest skis I’ve ever owned, the Mantras provided a great mix of float and control as we made our first run down the backside to the bottom of the new chair. The terrain was excellent steep fall-line skiing. For the second run down the back side, we ventured a little further off the main runs, choosing a steep treed line with lots of fresh untracked pow as the reward. Although the fresh tracks were quickly skied out by the crowds, conditions remained good all day, and lift lines were light despite the crowds.

The next morning, Whitewater was reporting no fresh overnight, but it was snowing, so we headed up for another day of skiing. Heavy snow throughout the day meant that conditions improved throughout the day, with soft snow filling in between the bumps and piling up on the soft margins of the bump runs. Our daughters mastered the handle-tow and started to explore Whitewater’s uncrowned green runs.

Day 3 dawned clear and Rob announced that it was time to tour. I’d heard a little griping from locals that the ski area expansion had eliminated some of the favourite backcountry runs that would end at the ski area access road. However, Rob assured me that there were still plenty of great touring opportunities from the resort. I had brought my avi safety gear, so only had to borrow some wide skins for my Mantras and I was good to go. The “tourable” Baron bindings meant I could flip a switch and put the Mantras in “touring mode”. The setup worked great, even with clunky alpine boots it was just fine for the short tours from the top of the lift. And, I was happy to have the wide shoveled Mantas as we hit the deep untracked powder runs off West Ymir and White Queen. The skis handled great in deep backcountry snow. 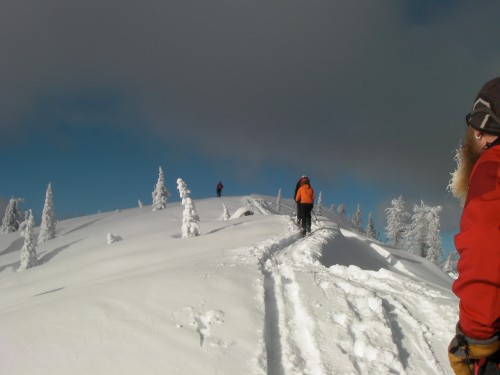 New Years Eve was our last day in Nelson, and we were happy to spend one last day at Whitewater, mostly skiing with the kids and doing a few more hot laps. It was unusually cold for Whitewater, with temps dipping to -20 in the morning. This helped thin the crowds a bit more and we had a great last day of skiing to close out 2010.