BC is the mecca for powder

There are two types of skier: those who can afford to heli-ski, and those who can’t. Granted, there may be a third category for those who simply don’t want to heli-ski, but they are few and far between. Indeed, it seems incomprehensible that anyone, after glimpsing the poetic splendour of a skier gliding through untouched, knee-high powder, would not experience a shift in their own life’s purpose. This is skiing in its rawest, most unadulterated form, and it was pioneered in British Columbia, which remains, to this day, the sport’s mecca. 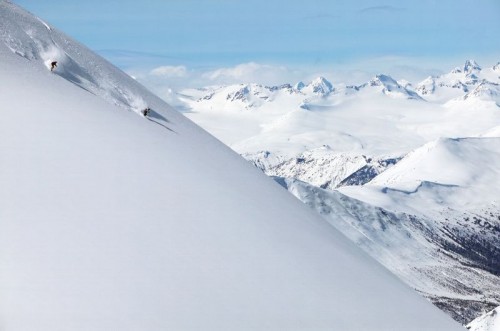 There are pistes and there are off pistes, and then there’s the backcountry, the playground upon which heli-skiers – and boarders – cavort. At first glance this is a remote and rugged wilderness, containing innumerable dangers and risks, but it possesses the one thing that no snow enthusiast can resist: acres upon acres of pristine powder, accessible only by helicopter. If you’ve ever wondered how those incredible photos are captured, the ones with skiers up to their eyeballs in snow and surrounded by great white plumes, now you know.

A combination of factors gives B.C. its reputation as the greatest place on earth to leap out of a helicopter with two planks attached to your feet. First, there’s the snow, or more specifically, champagne powder. As the name suggests, this is heavenly stuff, so light it is as if the Lord himself sifted it with a divine sieve. Then there’s the sheer quantity of it; if you thought the line about being up to the eyeballs in snow was a joke, you’re wrong. British Columbia’s backcountry is unimaginably vast, effectively offering skiers a limitless selection of untouched descents. Lastly, there’s the backdrop, a landscape dominated by ten enormous mountain ranges which stand magnificent and motionless, inspiring awe like a picture painted on the world’s greatest canvas. Altogether, the effect is staggering.

Located on the western slopes of the Canadian Rockies near Revelstoke, Mica Heliskiing are proud to offer an à la carte menu, allowing skiers to point towards any mountain face in sight and find themselves skiing down it just minutes later. Of course, extreme sports are synonymous with danger, which is why Mica Heliskiing place specific emphasis upon customer-focus and safety. Professionally trained and certified guides lead small groups through the backcountry, of which they have intimate and extensive knowledge, to ensure their exceptional safety record is maintained. This is a standard familiar to all who operate in British Columbia.

The Achilles heel of heli-skiing is its dependency on the weather; helicopters rely upon the mercy of the heavens, meaning adverse conditions can ruin a day in the wilderness. In such a scenario, however, there is another form of transport available: the snowcat. Somewhere between a van and a tank, snowcats can navigate practically any terrain, and, significantly, are not scared of a snowstorm. This has, in turn, spawned snowcat-skiing, identical to its aeronautical relative in every way except the means of ascent. 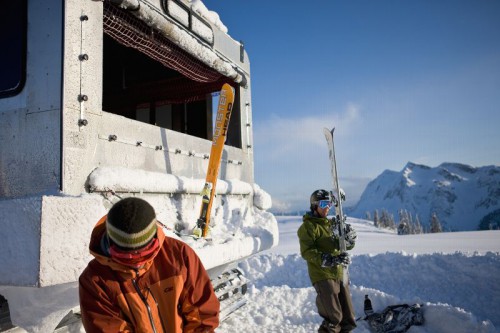 The team at Island Lake Catskiing in Fernie BC welcome guests into a family atmosphere, and stress that you don’t have to be Mark Abma (one of B.C.’s own sons who is a leader in the world of backcountry skiing) to enjoy the powder made accessible by their fleet of snowcats. What’s more, cat-skiers are no less spoilt for choice than their aerial brethren, with an average of 900-1,200 cm of snow per season across 7,000 acres (that’s a lot) creating more options than any skier or snowboarder would ever be able to consume. In short, they offer something for everyone.

Featuring over 90% of the world’s heli and snow-cat skiing activity, British Columbia is undoubtedly the mecca for powder hounds worldwide. There are numerous reputable operators in the region, each oozing an infectious enthusiasm for their art, and many offering exclusive lodges to accommodate their guests. The real secret to B.C.’s success, however, is the extraordinary quality and quantity of its backcountry, meaning no skier or snowboarder ever leaves disappointed, and ensuring the British Columbian motto is upheld: Splendor Sine Occasu – Splendour Without Diminishment.