What La Nina Means for Snowfall

“Why do we care about La Nina, or El Nino?” In short, it’s really the only reliable clue that meteorologists have to predict temperature and precipitation patterns months and seasons in advance. Meteorologist/skier Joel Gratz weighs in.

Colder than normal water temperatures in the Pacific make 2010-2011 a La Nina winter. This is good news for many skiers looking for deep snow.

When geek-speak goes mainstream, you know the nerds must have a hot topic on their hands. You might think that I’m talking about The Facebook Movie (“The Social Network”), where geeks write computer code over shots of Tequila. But not quite.

I’m actually talking about meteorology. With the words La Nina getting mainstream attention this fall, all skiers are scrambling to hone their weather skills in hopes of finding just what “The Girl” (or “The Nina” according to Chris Farly) has in store for them. As a meteorologist and lover of snow and skiing, I’m here to turn the geek speak into snow information.

To save you most of the suspense, here’s the conclusion right up front. If you’re further north in the U.S., you’ll probably see higher than average snowfall. If you’re further south in the U.S., you’ll probably see lower than average snowfall. Don’t worry; there are more details in a bit.
You might be thinking, “Why do we care about La Nina, or El Nino?” In short, it’s really the only reliable clue that meteorologists have to predict temperature and precipitation patterns months and seasons in advance. 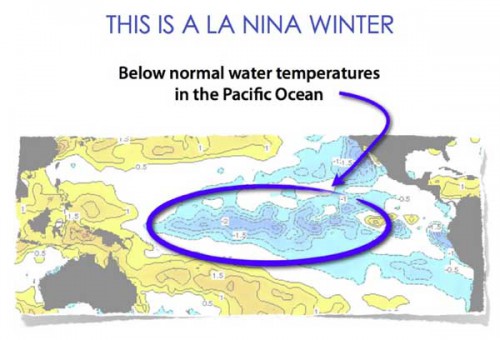 When we look back on previous winters with an El Nino or La Nina, some weather patterns emerge, and we use this knowledge of the past to infer what is going to happen in the future. In the absence of an El Nino or La Nina, it’s almost impossible to predict snow and temperature patterns months and seasons in advance. But for this winter we’re in luck, because La Nina is back! So here’s what we can expect La Nina to mean for snowfall:

Of course, one or two big storms can mean the difference between a season that’s below average and one that outperforms, so while these seasonal forecasts are interesting, I look at them as something fun to read during the preseason rather than as an absolute decision-making tool.
That said, for areas that are slated to get higher than average snowfall this year, it appears that January and February are the prime months for big totals, and this could include December as well.

But enough geek speak. Regardless of the seasonal outlook above, it will snow and you will have a great time on skis this winter. And that’s my 100% guaranteed prediction.