A BC Marijuana Story

Nelson, British Columbia is a hidden gem inhabited and visited by different people with a common passion for snow culture. Paul DeFelice is one of those people. As a skier for Warren Miller in the ‘80s, he admits to overlooking the beauty of Nelson. “It was a slow evolution to realize what was here and then I was still here for like 10 years as a ski fanatic,” he says. “I knew the people at the hill, but what was going on in Nelson, I didn’t care!” His interest in the little ski town peaked when he felt there was catching up to do. The only trick was how to survive in his new town.

“I knew nothing about the pot culture when I came here,” he continues. “But then I’d gotten a taste of the snow, I’d been heli skiing, and that’s when I became aware pretty quickly that everybody smoked pot. That’s how you get by in this town!”

After gaining an understanding of B.C. culture, and meeting the people passing through who came to smoke pot and ski, DeFelice opened his center for Cannabis activism. 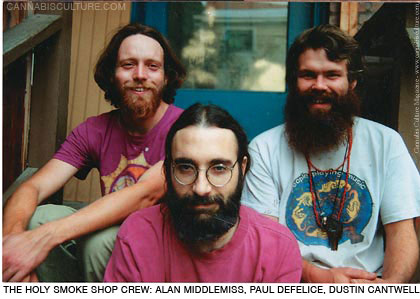 Holy Smoke Culture Shop was intended to be a smoking sanctuary for the community, designated by the Church of the Universe as the Holy Smoke Mission of God. It was a business venture for DeFelice and two friends after restoration work in Nelson ended. His dread locks didn’t make any more enemies than his head shop: Coffee and cookies for sale aside pipes and papers. And then drug dealers started hanging around outside.

“There was a squatter in a tent selling pot, there was a gang of five youths selling pot, coke, crack, and E by the bench, there was a lone bike courier pot dealer who also stole people’s money and was known as a grow ripper and also known to carry weapons,” says DeFelice. He also says the local police were aware of open dealers but didn’t see it as threatening so in response he hung a huge sign outside the shop saying, “No Dealing In The Park Please.” He says, “the final straw was an American kid who set up his lawn chair with a cooler right outside our entrance and sold pot, mushrooms and beer to anyone of any age”.

This went on for about a year, with Holy Smoke filling two needs for the community: good quality weed, and a safe environment free of rogue dealers. 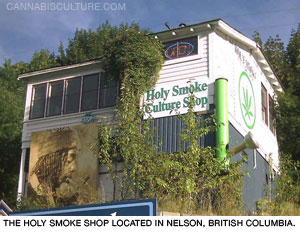 On July 15, 2006, DeFelice and the other Holy Smoke owners were busted for trafficking marijuana. Rather than deny the conviction outright, or fight it by every means possible, including trying to have the warrant thrown out, DeFelice did something unprecedented: He plead “necessity.” Similar to self defense, the Holy Smoke defendants claimed they were doing more good than harm. In short, his defense claimed that prohibition did more harm to society that good

“The ‘necessity’ defense was our lawyer’s idea,” says DeFelice. “It was an argument he’d always wanted to raise and in his words he thought ‘these are the people, this is the place, and this is the time to do it.’” DeFelice and his defense attempted to prove that by selling high quality cannabis, Holy Smoke prevented the sale of drugs to minors and regulated the trade.

DeFelice lost the case, and was sentenced to one year in prison—a preposterous sentence for the crime he was convicted of in Canada. He appealed the conviction, and lost, then appealed the sentence.

Post trial, DeFelice spent three days in the Nelson lockup then two days travelling, “handcuffed and shackled in the back of a paddy wagon,” to Kamloops Regional Correction Centre with an overnight stay in the Kelowna local jail. DeFelice served five days in a maximum-security prison before his appeal was finalized.

In May of 2010, DeFelice finally had his sentencing hearing. The one-year prison sentence was reduced, and DeFelice received a nine-month conditional sentence otherwise known has house arrest. The judges ruled he is not allowed to consume alcohol or use illegal drugs, or leave the province unless given special permission.

DeFelice’s reasons for starting Holy Smoke were as viable as why he started to sell. Such testimonies leave anyone on the fence about pot prohibition reasons to analyze the fallacies in the anti-pot argument. The story of criminalizing a man who wants to enjoy nature his own way, meanwhile harming no one, is a North American archetype; this is the case with skier Paul DeFelice.